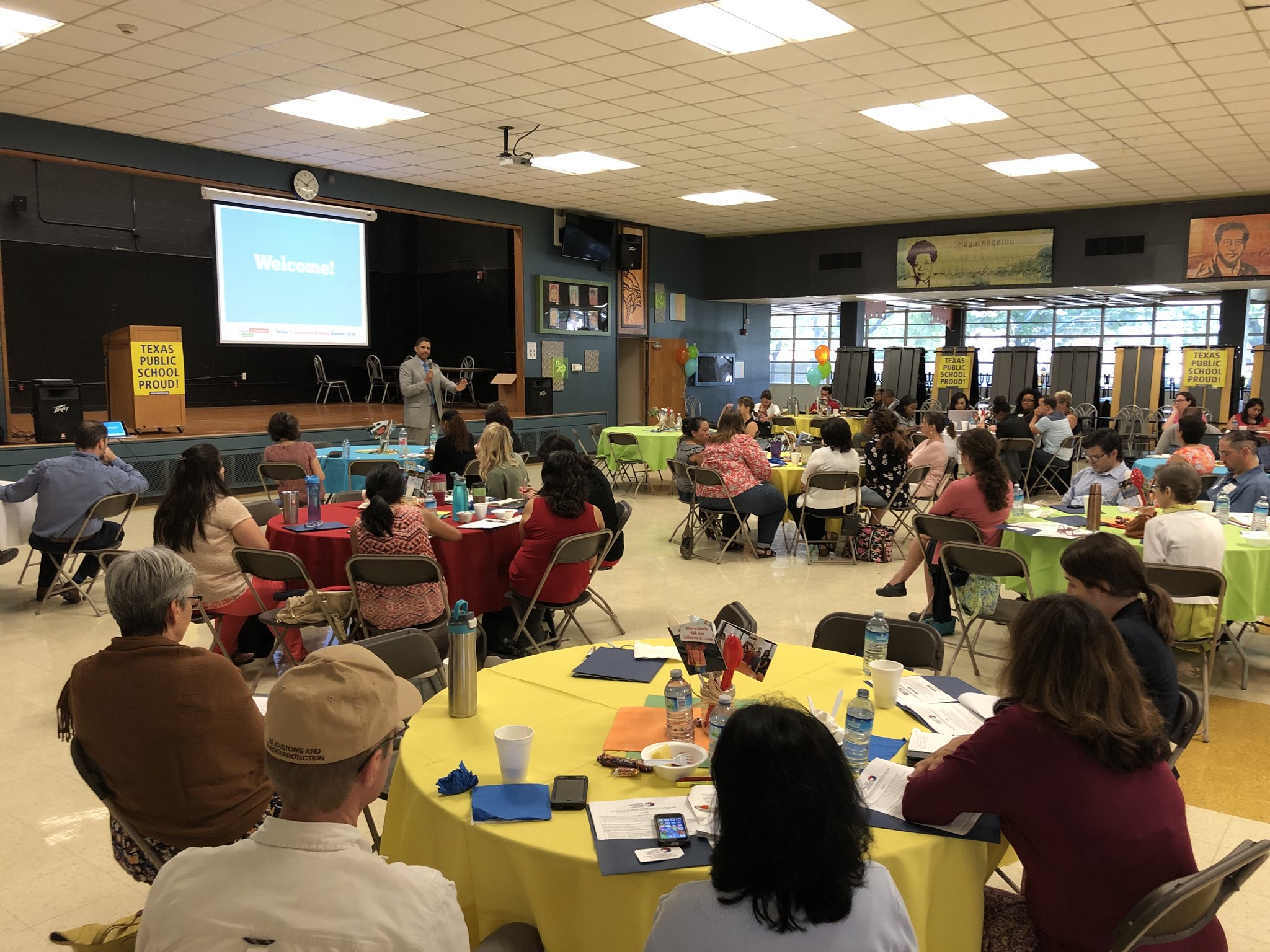 And what are community schools? Community schools are developed by parent-teacher-community partners who come together to identify and marshal the services the students at a campus and their families need–often called “wraparound services”–to support academic success. This model is especially valuable and effective for struggling campuses that must develop a turnaround plan that meets state requirements. “No matter what part of the country, how big or small the district is, or what the ethnic or economic makeup is of a school in need of assistance, if dedicated teams follow the prescribed protocols, the community schools model will work,” said Corina Ortiz, a Houston Federation of Teachers organizer who attended the summit.

The summit provided both an overview of successful community schools initiatives, along with nuts and bolts training on how to implement the model, and plenty of opportunities to share information. “Being new to the community schools movement, I was unsure of what to expect in attending the summit, and I wondered what I would end up bringing back to share with my coworkers back in Houston,”  Ortiz said. “Almost, immediately, I felt a sense of embrace from a very diverse and extended family of educators and community leaders. Ideas, suggestions, proposals, recommendations, plans and business cards–lots of business cards—and plenty of offers of, ‘If I can help, don’t hesitate to call me,’ were at every juncture.”

Houston ISD is one of several districts where Texas AFT locals are working to develop community schools. (You can see a great overview of the efforts in Houston News section for more information on community schools.

This month’s American Educator also takes an in-depth look at community schools, how they are defined, and examples of successful implementations around the country.

TRS to hold summer meetings, and we’ll be there highlighting the need for investing in health care, pensions

The Teacher Retirement System of Texas Board of Trustees will meet on July 26 and 27 in Austin, and the board is expected to decide on an assumed rate of return on investments, which helps define how much contributions would have to increase to cover future obligations and make future benefit improvements possible. Texas AFT and our members have written thousands of letters urging trustees to “leave politics out of the decision.” At its April board meeting, trustees put off making a decision on the rate of return after we argued that a proposal to lower the assumed return to 7.25 percent from 8 percent would be too big a leap. (Alternate proposals called for a change to 7.5 percent.)

Whatever the eventual decision on rate of return may be, there is no question about the need for higher state pension contributions. The state held its contribution down to the constitutional minimum for many years, while employees paid more. Texas has the lowest state contribution rate by far of any non-Social Security state. Currently, state contributions are set at 6.8 percent of payroll, while employees pay 7.7 percent and school districts pay an effective average rate of 1 percent. At an assumed rate of return of 7.5 percent, projected unfunded obligations would increase by $7.3 billion, and contributions would have to rise by 1.38 percent before pension benefit improvements could be considered.

Even more urgently needed are higher state contributions for the separate health-care plans administered by TRS for active and retired school employees. Faced with stagnant state contributions for TRS-ActiveCare that have not budged since 2002 despite soaring health-care costs, the TRS board has been forced to raise premiums and curtail benefits repeatedly. At April’s board meeting, it happened again, as TRS trustees raised the costs to be borne by employees (or their districts, if willing) by as much as 9.5 percent for the top ActiveCare plan, while reducing benefits. Other ActiveCare options also saw cost increases and benefit shrinkage. Trustees in April also heard from the TRS staff that the TRS-Care plan for retirees will require an infusion of $400 to $600 million for the 2020-2021 biennium when the Legislature meets next year–just to maintain the plan with the reduced benefits and increased costs imposed on retirees in 2017.

Stay tuned! We’ll have another chance next week for you to write trustees and let them know they need to advocate a significant state investment in pensions and health care. 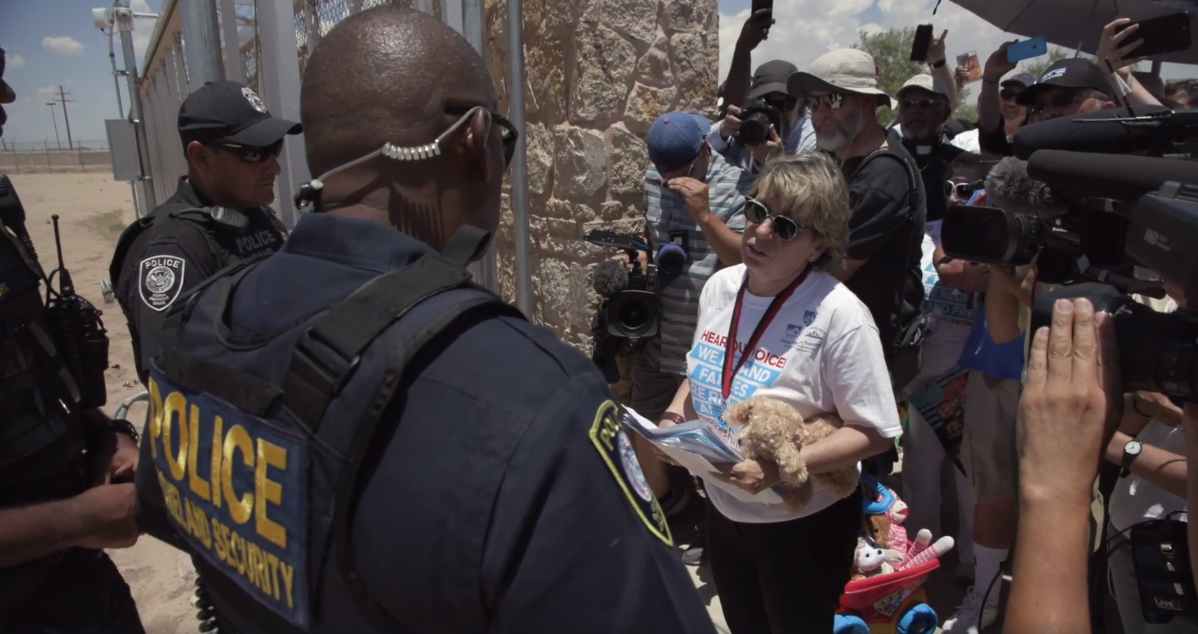 On Tuesday, June 26, AFT national, state and local affiliate leaders, national and local civil and human rights activists, faith leaders, teachers, school employees and healthcare providers rallied and protested against the administration’s immigration policies outside the El Paso County Court House, where children and parents are first processed. The group then went to the Tornillo Port of Entry for a prayer vigil led by various faith leaders for the children and their families and the horrible trauma they have endured. Afterward, AFT President Randi Weingarten led the group in an attempt to deliver toys, books, and clothes to the kids separated from their parents. The offer was declined by Immigration and Customs Enforcement officials. Thanks go to the members of El Paso AFT and Socorro AFT for helping with the event, as well as our locals in Edinburg, Pharr-San Juan-Alamo, and Brownsville, who participated in Brownsville rallies.

Members of our local unions also have actively protested the separations by attending events in their cities and in the Rio Grande Valley. Corpus Christi AFT also highlighted how a new charter school in Corpus Christi has ties to Southwest Key, which holds the contract for housing separated children. The local union held a protest at the school site on June 20. 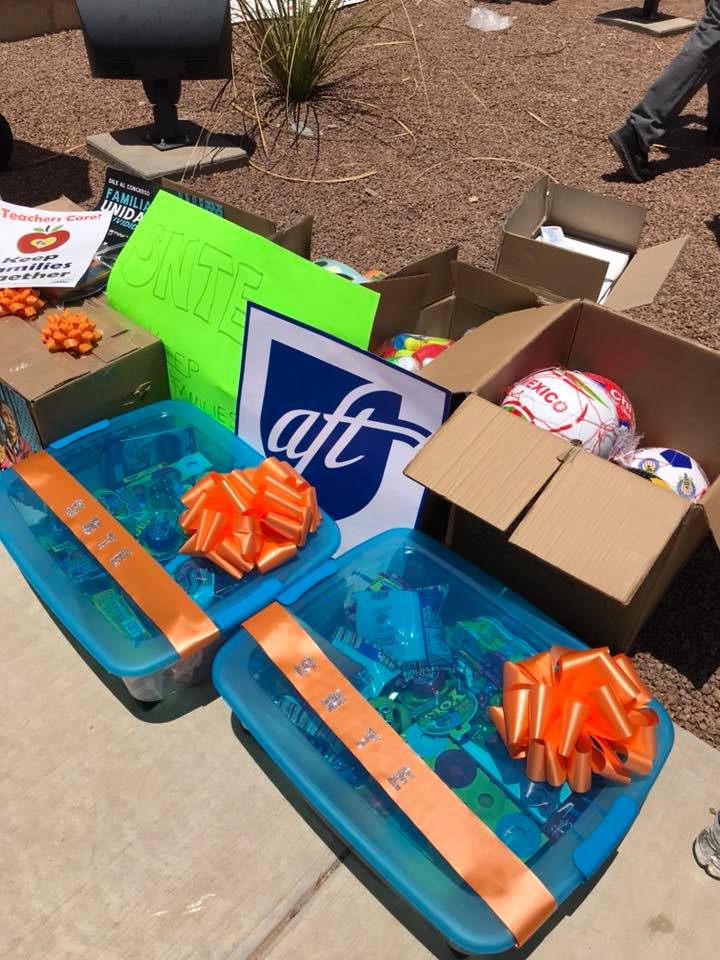 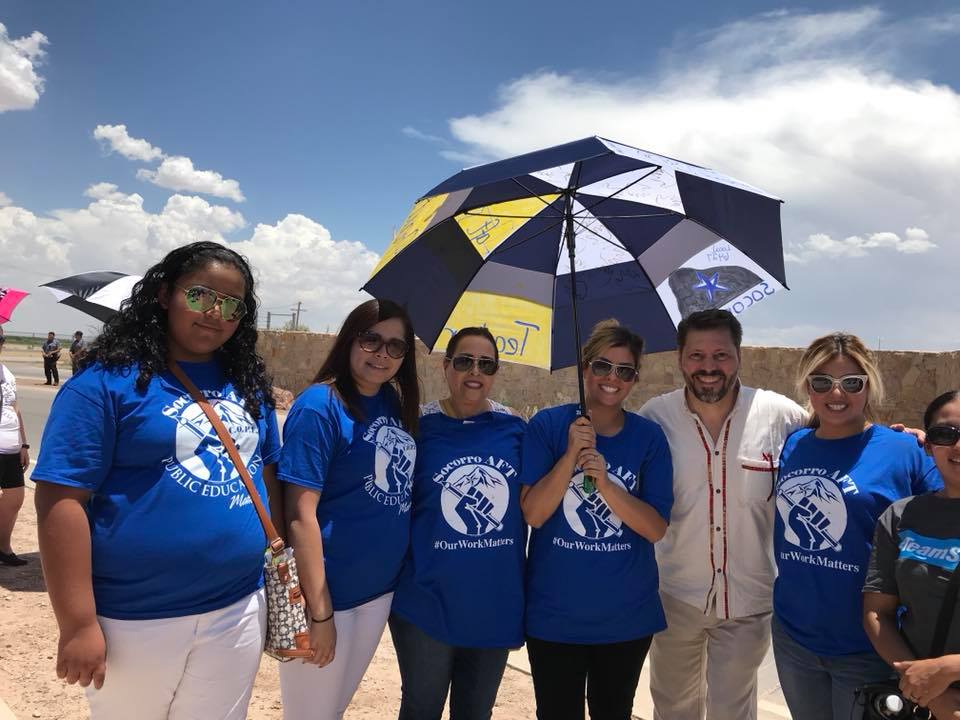 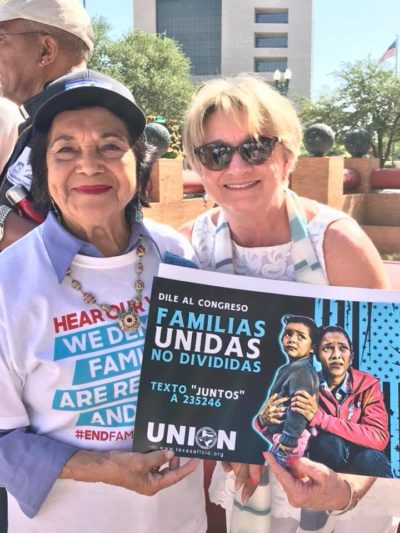 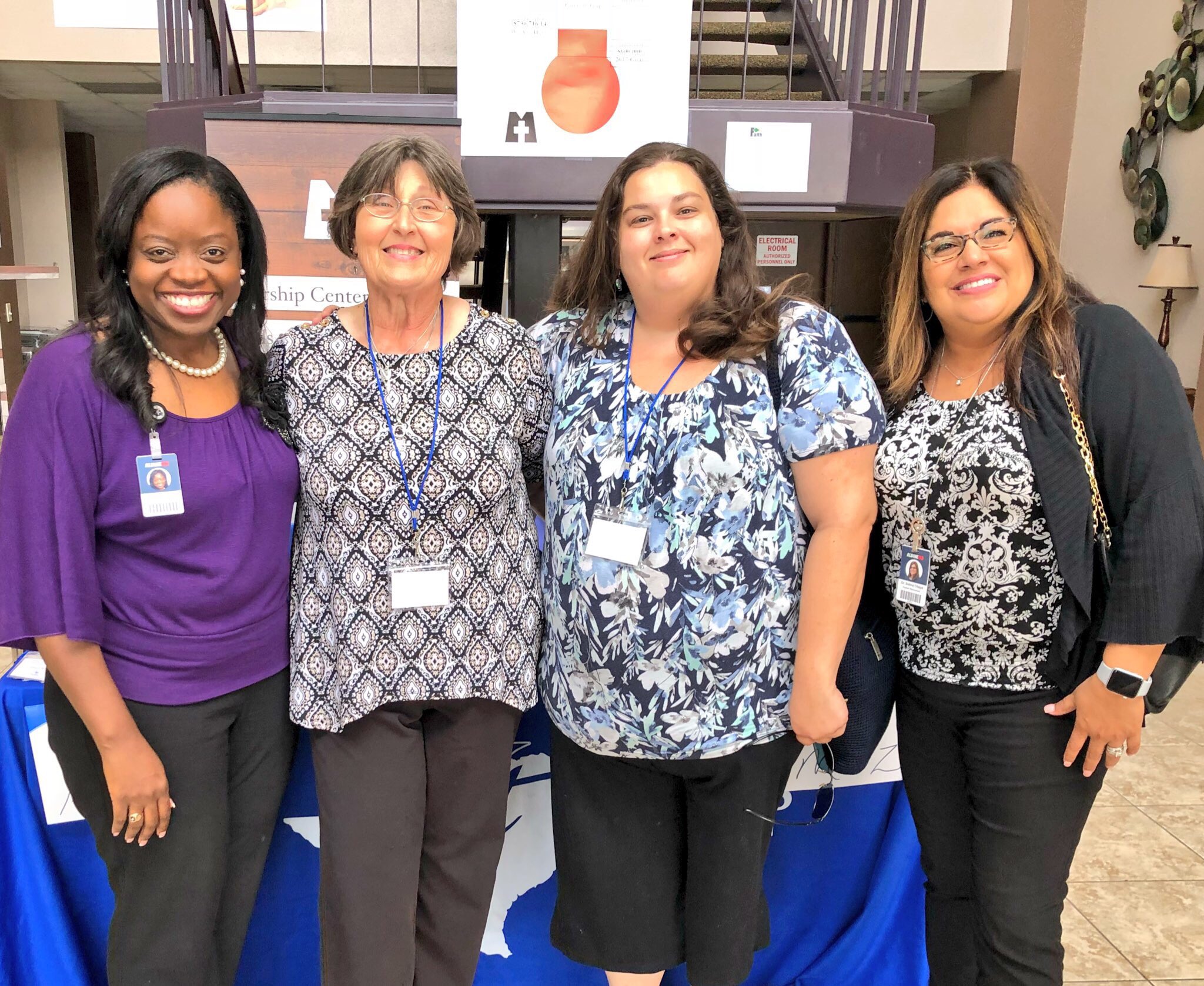 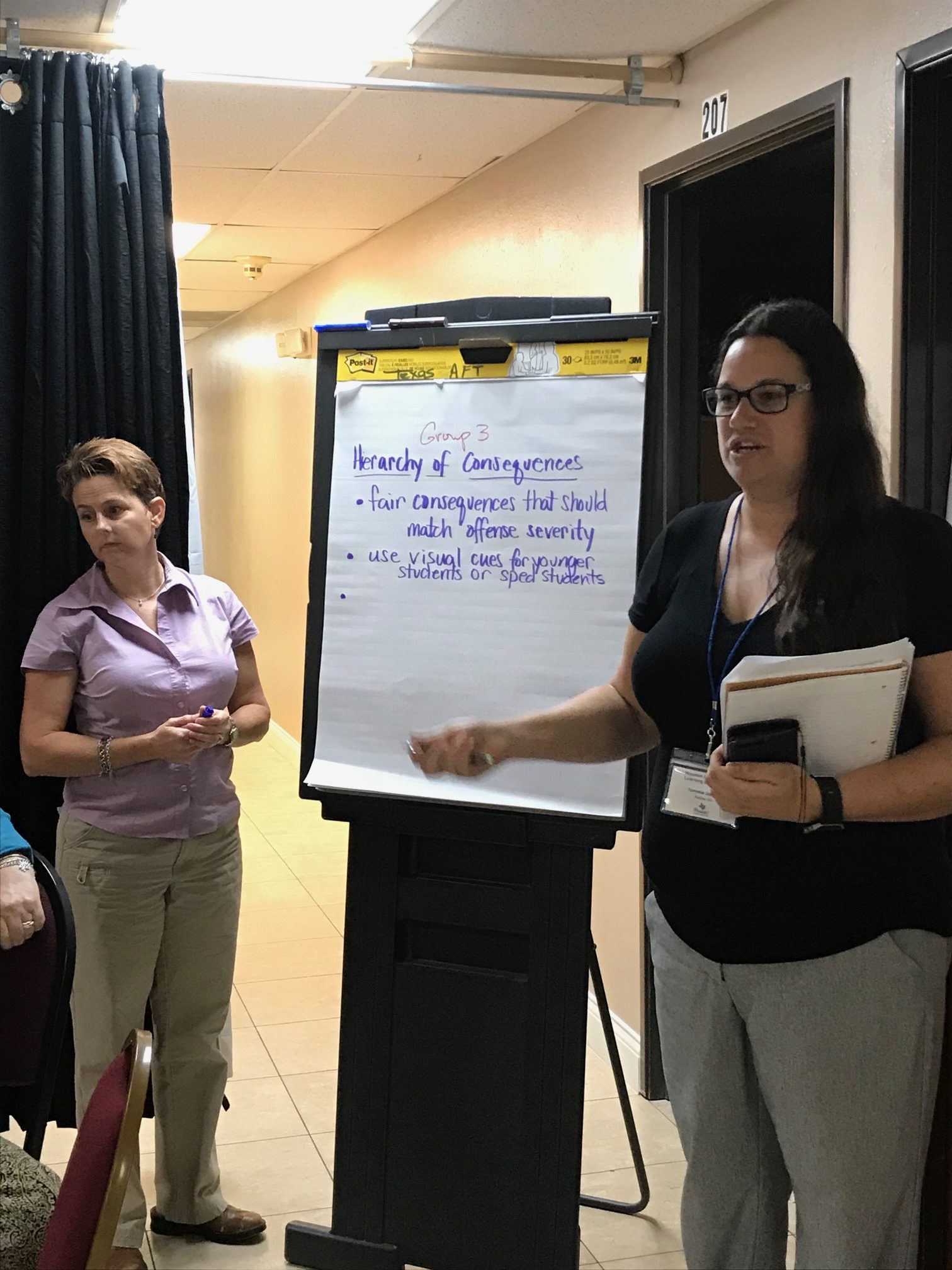 Welcome to Union Tips for U.S. Trips–a summer travel series for union members and their families. Watch these fun videos for vacation ideas or just to be charmed by awesome destinations including union monuments, union resorts, national parks and more. We hope you’ll be inspired to travel union and save money with the Union Plus Travel & Entertainment programs listed at the end of the videos!

Not getting the Legislative Hotline? Here’s what you’ve missed…

Texas AFT publishes a daily Legislative Hotline to keep you informed about education policy, politics, union news and events. Not on the list? Here are a couple of items you missed:

Round-Up is the email newsletter from Texas AFT and is published every two weeks. You are on this list because you either subscribed, or you were added when you opted in participating in a Texas AFT action campaign. You may unsubscribe at any time with the link below, but we’d love to have you stay to hear more about our union, public education, and your profession.