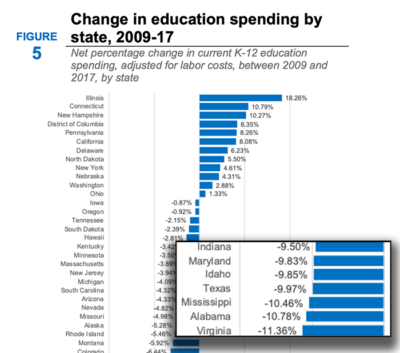 Last month, AFT National President Randi Weingarten moderated a virtual panel discussing the recently released report from the Albert Shanker Institute regarding the Coronavirus’ effect on the future of education funding. Bruce D. Baker, one of the authors of the report and a Graduate School Professor of Education, explained his work, with responses from several education and labor advocates.

At this point, we can be sure that there will be cuts of some sort, but the questions are what kind of cuts and to what degree. With the vast majority of education funding coming from state and local sources, the volatility of the market has an outsized effect on education funding as opposed to other government programs. The mechanisms by which state and local governments fund education also makes it so that the time it takes for education funding to recover to pre-recession levels is also prolonged compared to that of other government programs. In fact, many school districts are still recovering from the Great Recession of 2007-2009, even as they are now being hit with yet another recession.

The researchers at the Shanker Institute looked at the Great Recession for guidance of how the current recession will affect school districts. The study found that funding to school districts dropped substantially starting in 2008 and finally bottomed out in 2011 with total education funding around 6 percent lower than it was before the recession. This is simply an overall snapshot of the effects, but the budget cuts were not applied equally across the board. High poverty districts were disproportionately affected by the budget cuts. While some states had mostly recovered by 2017, most states had not recovered even at this point, ten years after the beginning of the recession.

The report concludes that, while the situation is dire, there are still steps that school districts and governments can take to mitigate the effects of the incoming recession. These steps include short term recommendations such as a large federal aid package that is allocated equitably and in multiple phases along with long term recommendations, including building up budget reserves and instituting more progressive funding formulas.