Ed Sills: The problems with a sales tax hike and why its getting blasted in the media 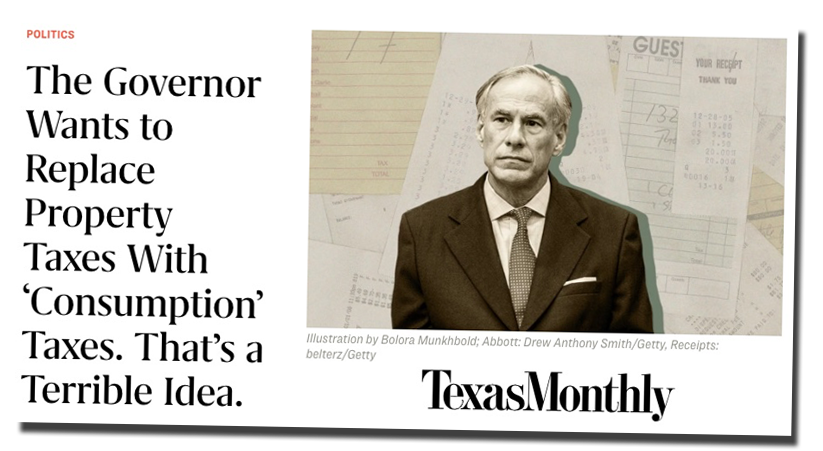 By Ed Sills
Texas AFL-CIO
Gov. Greg Abbott is wearing his ideology on his sleeve in leading an effort to raise the sales tax a penny on the dollar to pay for a property tax reduction for wealthy property owners, Texas Monthly reports.
Abbott didn’t just endorse the tax swap. He proclaimed all property taxes “unfair” and suggested a consumption tax should replace them. Past iterations of this bad idea have suggested the sales tax should be applied to necessities like groceries – and raised substantially – to get to that point.
It’s no wonder the Texas Senate chair who oversee tax bills has proclaimed Senate support for the leadership proposal is weak. Texas Monthly notes Abbott suggested the radical thinking behind the idea in a tweet:
Take Governor Abbott, for example. On Sunday, at the urging of one of his followers, he tweeted, “Property tax itself is unfair. Any amount. What it boils down to is, the government owns it , not you. Period!!!!!”
Here is how public policy works in 2019: A man on Twitter with six followers who claims to be from Kentucky and whose feed consists of a lot of racist conspiracy-mongering dared the governor of Texas to declare that his state’s tax regime is immoral, and the governor did. “There, William, I tweeted it,” Abbott continued. “Because it’s true. That’s why I’m trying to shift from a property tax system to a consumption tax system so you control what you pay.”
Many people across the political spectrum agree that Texas is too dependent on property taxes and that homeowners’ bills are rising too rapidly. But that’s not what Abbott is saying here. He’s making an argument that property taxes are so immoral that they should be abolished and replaced with consumption taxes like the highly regressive sales tax. There are a couple of strange things about this. First, as much as Abbott and other top state officials talk tough on property taxes, they’ve never done much to cut them significantly. Even this year, the biggest point of contention at the Lege involves how to trigger rollback elections, not the tax regime per se.
Second, let’s credit Abbott with the conviction, expressed by William, that property taxes amount to homeowners or business owners “renting” their property from the government. (The logic behind property taxes, of course, is that property owners ought to pay for services that not only make life livable, but also increase the value of that property.) In what manner are sales taxes, whereby the government charges a steep fee on individuals for the purchase of basic necessities, more reasonable or ethical? If the property tax is the government renting your home to you, the sales tax is the government leasing your shirts to you. Yet it’s a staple of conservative thought in Texas that the latter is much “freer” than the former.
Read more: https://bit.ly/2GiDBsV
What exactly does it mean when we call the proposed sales tax hike “regressive”? No one is disputing the leadership’s sales-tax-hike-for-property-tax-reduction idea is a transfer of wealth from the poor and working poor to those with incomes above approximately $150,000 a year. The rich get richer….
The Texas Tribune posted a strong explainer:
A regressive tax is one that takes a larger percentage of income from poorer people than richer people. Because low-earning people spend a larger share of their income on sales taxes, raising the sales tax rate causes their total tax bills to grow relatively larger. Texas’ sales tax is one of the state’s most regressive ways of earning revenue, according to the Texas Comptroller.
An average Texan in the poorest 20% of households might expect to pay around $1,200 per year in sales taxes, while an average Texan in the richest 20% of households might expect to pay $4,900, according to an analysis of comptroller estimates for 2021 tax collections.
By comparison, an average Texan in the poorest 20% of households might expect to pay around $1,000 per year in school district property taxes, while an average Texan in the richest 20% of households might expect to pay $5,800.
A Texas Tribune analysis of state tax data found that increasing the sales tax to buy down property tax rates would likely raise the percentage of income that the bottom 80% of Texans spend on taxes. Only the top 20% of Texans – those in households earning more than about $150,000 – would probably see a reduction in the percentage of their income that they pay in taxes. The analysis assumes that raising the sales tax rate would not significantly change Texans’ consumption patterns.
Read more: https://bit.ly/2Is4iiy
Meanwhile, Ross Ramsey of the Texas Tribune argues a constitutional amendment is being pursued because passing a regular sales tax bill would take “guts”:
[T]he Legislature is looking at a constitutional amendment. That requires approval from two-thirds of the House and of the Senate. The governor would never see it; the ultimate decision on whether to raise the one tax in an attempt to shrink the other would fall to Texas voters.
It’s more difficult, but it’s easier on the gastrointestinal health of the average Texas politician. As Texas baseball legend Nolan Ryan used to say in the commercials, “It’s gentler on the stomach.”
This is all about who gets the blame for the tax being raised. A Legislature more confident about getting the credit for falling property taxes might take the brave road. But previous attempts to lower school property taxes have fallen well short of impressing Texas voters. There’s a good chance they’ll be madder about the cure than about the disease. And in that case, it might be better if the result is the fault of the voters themselves.
There’s also a good chance they’ll never get the chance to decide.
Read more: https://bit.ly/2IqzDC3