Rob D’Amico and the communications team at Texas AFT bring you #TxEd in the Media, ongoing reports on Texas education in the news and a look at how the news is covering teachers and public education. The report is updated several times a week.

While not directly related to Texas education, we’re excited to share some good news on the labor front from Missouri. 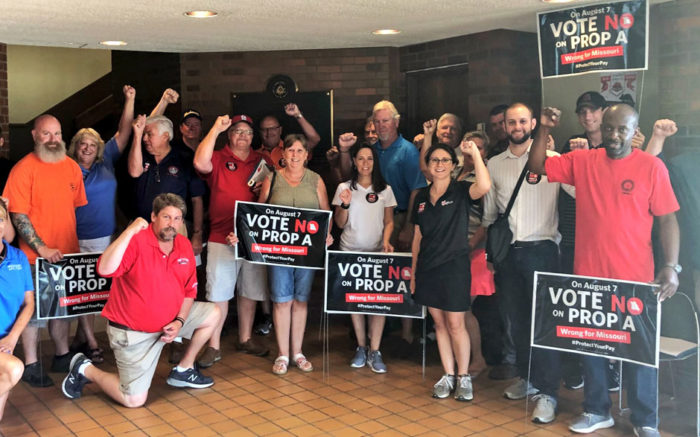 Voters in Missouri have overwhelmingly rejected a right-to-work law passed by the state’s Republican-controlled Legislature that would have banned compulsory union fees — a resounding victory for organized labor that spent millions of dollars to defeat the measure.

With about 98 percent of the precincts reporting, the “no” vote on Missouri’s Proposition A, which supported the law, was running about 67 percent, with nearly 33 percent voting “yes.”

In 2017, the right-to-work law passed Missouri’s Republican Legislature and was signed by then-Gov. Eric Greitens. However, union organizers gathered enough signatures to keep it from going into effect pending the results of a statewide referendum. The rejection of Proposition A effectively kills the law.

Texas schools not following the law on voter registration
August 3, 2018 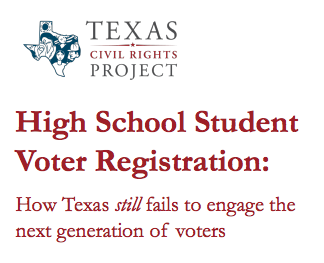 targeting young people is too expensive and doesn’t bring enough votes when weighed against retirees and working-age folks. In Texas, part of the problem young people face in being engaged with and by our political system is the system itself, which fails at the first hurdle of registration.

For several decades Texas law has required high school students turning 18 to be given the opportunity to register to vote, but for a majority of students this is completely ignored. Voting in Texas is easy once registered, but getting registered has been made unreasonably difficult over the years, and those who are positioned to help young people need to step up.

A story published by the Texas Observer yesterday outlines the noncompliance with the law in detail and notes:

For three decades, public and private high school principals in Texas have been required to distribute voter registration applications to all students who will be 18 years old that school year. The law stipulates that students be offered the applications at least twice per year. But without an enforcement mechanism or sufficient outreach by the state, compliance has been “abysmal,” according to the Texas Civil Rights Project’s report.

In Texas we have built schools that strive to present graduates as members of society ready to participate and grow as the future leaders of communities. Solving this problem is easy for the state to do, and just as it is a choice to not register students, we as a state can make it a choice to get young people engaged.

Thanks to our El Paso AFT president, Ross Moore, for highlighting this article to 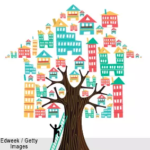 his membership. David Gamberg–a former teacher and principal who now serves as superintendent of Southold and Greenport Union Free School District in Long Island, New York–writes on the importance of “building” in “The Five Steps for Building a Better School.” He writes:

I am convinced that the foundation of a good education is about the concept of building—building a school, building a community, building relationships, and building a sense of self….I’ve been thinking recently about how we can alter the school experience for students and staff to better meet the needs of our learning communities. Some of the very structures and experiences that harken back to an earlier era in education may in fact be part of the future of teaching and learning. While it may be counterintuitive in our sophisticated high-tech world, building, manipulating, and creating inside the physical spaces of our school environment are essential in future learning.

Gamber goes on to outline five steps, in very simple but compelling examples, for what’s needed to be built:

1) Create a culture and environment that attends to the authentic learning experiences of the students.

4) Engage stakeholders in re-envisioning the schoolhouse.

It’s a great a great and quick read to get you thinking about the upcoming school year.

The Texas Tribune does a pretty good job of laying out how TRS-ActiveCare got started, although it spent a little too much online ink noting how districts can’t get out of it once they opt in. The main point to convey is what we’ve been highlighting to legislators for years–that the state hasn’t raised its $75 contribution to school employee health care since the program began in 2002. Can any rational person not be shocked by this fact, that the state hasn’t put one penny more toward rising health-care costs in almost 17 years?

Well, I guess we shouldn’t really be shocked, after I delve a bit deeper into how this whole thing got started. Texas AFT–then the Texas Federation of Teachers–had been fighting for a statewide insurance system for school employees for at least 20 years, but penny-pinching legislators who couldn’t understand the need for such a system blocked the idea every session. In 2000, we started the drumbeat to finally get over this hurdle and our president, John Cole, traveled the state gathering stories from members about how their district health plans were failing them–either they were too expensive and/or the benefits were dismal. Districts were on their own to provide coverage, so you had a mish-mash of plans, usually with small districts having the worst due to a low number of employees in the insurance pool. 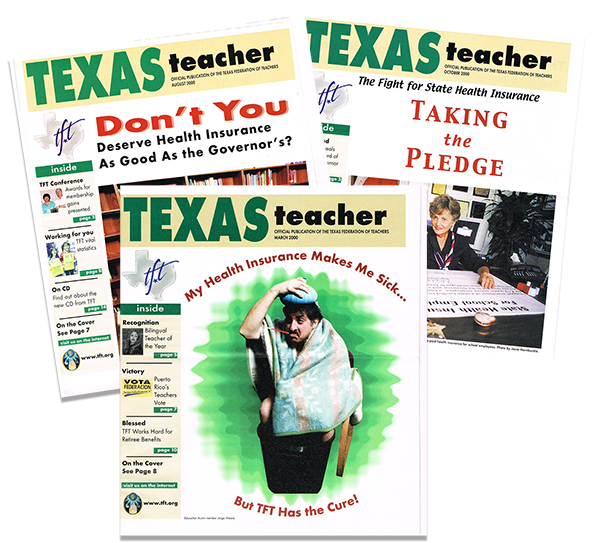 Cole, our legislative team and thousands of members writing to legislators all pushed the same message: “Health insurance as good as the governor’s” should be available to every school employee in the state. Essentially, they were pushing for something akin to what all state workers and state higher-ed employees got, which was full coverage paid for employees and half of dependent coverage paid. Actually, state law said districts had to provide access to similar coverage, but the catch was that unlike the state plan, there was no state money going to districts.

Our efforts finally were successful–to some extent. We saw the creation of the TRS health-care system in 2001, along with a defined state and district contribution to health plans–$75 per employee from the state and a minimum of $225 per employee from districts. (Employees also got a $1,000 health-care stipend to pay toward premium costs, but that was cut to $500 in 2003, supposedly temporarily–only to be erased altogether when it was rolled into a 2006 state pay increase for teachers. Whoosh, that’s another story!)

So with rising premium costs and no increase in state contributions, district have been once again in the mish-mash category–on their own to try and cover the added costs, or lumping them onto employees, or both. The state’s inaction has now diminished the success of that monumental achievement in 2001 for a statewide system. And it’s why we continue to push every session for “Health insurance as good as the governor’s.”

Here’s a chart that unfortunately sums up the problem. (It’s a tad out of date, and we’ll be updating it soon.) 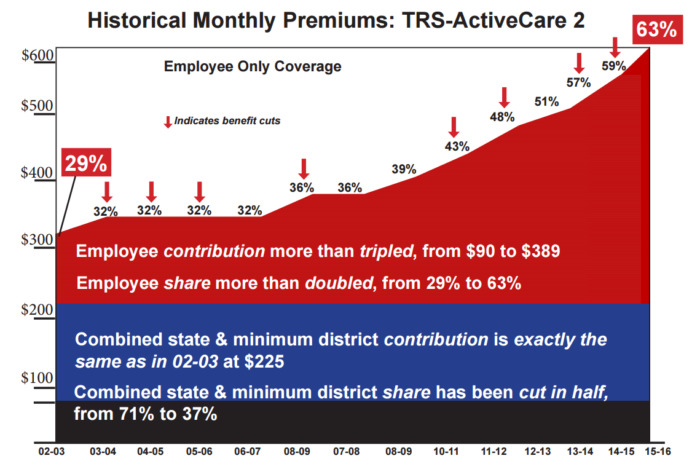 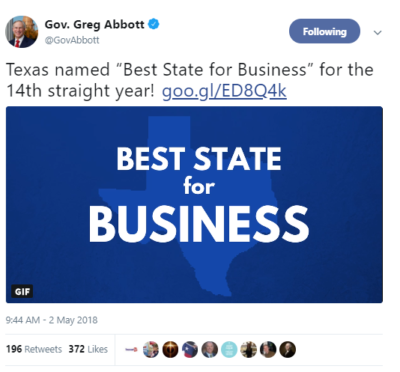 There’s a host of state leaders–like Gov. Greg Abbott–that have been bragging all month about Texas once again claiming the crown as the best place to do business. (There’s more than one national ranking that takes on this task, but the latest was from CNBC.) And all of that braggadocio prompted one of my colleagues to quip, “Yeah, but it’s the worst state to work for one,” since Texas has a dismal record on wages, workplace rights, health-insurance coverage, and  safety protections. (And when you look at how we take care of our children, it gets even worse.)

But if you look at bit deeper at the CNBC report, you’ll see that it isn’t giving Texas glowing remarks for the “Education” component of the overall ranking. Texas gets a “D” and a rank of 37th in the nation on that count. Interestingly, Chief Executive–which ranked Texas No. 1 in May–touts our states “skilled workforce” from great colleges as a key asset, although it doesn’t include education as a component in its rankings. Texas landed at No. 2 on the Forbes list–which also doesn’t look at education–last year.

Obviously Texas is benefiting in the short run from low taxes and a hands-off regulatory environment. But when is the bill going to come in for failing the generation of kids being shortchanged in our schools. We take a closer look at that today in our Legislative Hotline highlighting a report from AFT–“A Decade of Neglect: Public Education Funding in the Aftermath of the Great Recession.”  Spoiler…Texas is at the top of the list of states with the largest cut in K-12 and higher education funding since the 2008 recession!

HISD proposes pay freeze for all teachers, but school board gets final say* (August 7, CW39 Houston)