Are vouchers headed to the back burner in the Legislature this session?

While we likely will see a hot debate this legislative session on how to make charters more accountable and transparent (or how to halt them all together with a timeout on expansion), it’s looking like private school vouchers will be relegated to the back burner for legislators. Today we’re going to rerun a couple of items from one of our other online publications–#TxEDintheMedia, a column in which Rob D’Amico highlights and analyzes some of the top stories in education–with a look at vouchers. (You can find a link to the publication at the bottom of  every Hotline.)

Will vouchers move to the back burner for legislative session (November 20, 2018)

The Austin American-Statesman looks at the prospect for passing private-school voucher bills, and the verdict is that it’s not good. With stiff resistance in the Texas House, which has overwhelmingly rejected vouchers in the past, there never really was much momentum for vouchers anyway. Our Texas AFT President Louis Malfaro tells the Statesman:

“And where there were contested primary elections, almost categorically the Republicans who ran as friends of public education prevailed over those who said we need more school choice, we need more vouchers; so I don’t see appetite on either side of the aisle,” said Louis Malfaro, head of Texas American Federation of Teachers.

The problem, of course, is Lt. Gov. Dan Patrick and his allies in the Senate have used vouchers as a diversion and obstruction to the course of providing more funding for schools. As the story notes:

Meanwhile, the education focus at the Capitol has shifted to repairing a broken system of funding public schools. Last week, Dennis Bonnen, R-Angleton, the likely next speaker of the House, singled out school finance as the priority for the chamber, and Gov. Greg Abbott’s school finance plan was introduced at a meeting at the Capitol. 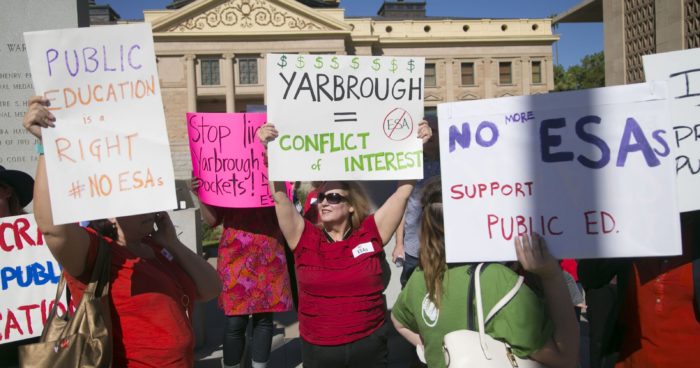 Education Week’s article on illegal expenditures by parents with voucher money paints a disturbing picture of what can happen when you start “school choice” programs without much oversight–and just how difficult that oversight can be.

Cosmetics. Clothing. And computer-technology support.Those are among the prohibited purchases parents in Arizona made with public money meant to support their children’s education, according to a recent audit by the state’s attorney general.

In the revolutionary school choice program that gives parents near-total control over how state dollars are used on their children’s education, some parents continue to abuse the system even after many of these issues were flagged in a 2016 audit.

In all, Arizona parents fraudulently spent $700,000 in fiscal 2018 on banned items and services.

I outlined last week how private-school vouchers have been relegated to the back burner for the legislative session here in Texas, but the Education Week piece is a good reminder that vouchers come in many forms, without using “voucher” in the name–for example, education savings accounts (ESAs). We’ve had plenty of variations on vouchers here in Texas (including ESAs, and “tax credit scholarships”). Here is a bit on how Arizona’s program works:

Passed in 2011, Arizona’s Empowerment Scholarships were the next phase of evolution of the traditional school voucher: the education savings account, or ESA.

Instead of giving parents tuition vouchers to spend at private schools, which is prohibited by Arizona’s constitution, the state deposits 90 percent of the per-pupil funds allocated to a participating student into a dedicated bank account. Parents use a debit card to spend the money on approved educational expenses, which can include private school tuition, home-schooling supplies, and therapy.

….“There is a severe lack of accountability to make sure that the funds are being used as intended and making sure that the program is being evaluated to measure if it’s working,” said Oscar Jiménez-Castellanos, an education professor at Santa Clara University.

You may also recall that I wrote about how Arizona’s Proposition 305–intended to expand the ESA program–went down in flames, not only from reports like these on parents’ illegal purchases, but also for who was utilizing the ESAs, as the Arizona Republic reported in October:

Nearly 70 percent of the money from the voucher-like Empowerment Scholarship Accounts is being used by students leaving A- or B-rated districts to attend private schools, The Republic found in examining the most-recent data.

By contrast, only 7 percent of ESA money is being used by students leaving districts rated D or F.