As property tax cap hearing starts, the question remains: Where will the money come from? 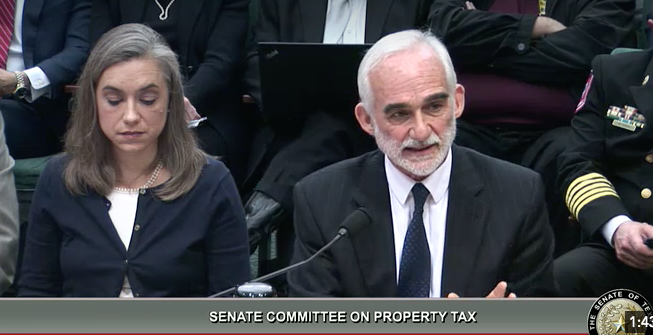 Dick Levine with the Center for Public Policy Priorities asks state senators where the money is to replace lost revenue with property tax caps.

The Senate Committee on Property Tax heard SB 2 today, which would cap property tax revenue growth to 2.5 percent per year, unless voters approve to exceed the cap. (The current cap before an election is required is 8 percent.) The authors claim the bill would provide more state funding for schools to make up for this local limitation and resulting revenue loss, and that the bill would reduce reliance on recapture. However, to budget wonks watching the hearing, the bill does not contain the necessary funding to be properly implemented.

Dick Lavine, senior fiscal analyst for the Center for Public Policy Priorities, testified that the issue of how to fund public schools with additional state dollars is “ghosted” by this bill. It is not clear if the bill will be a revenue neutral swap for schools or if schools would get more money.

He asked, “Where will the money come from? Will that source be a sustainable, adequate, and equitable source of revenue?” He also discussed “Proposition 13,” in California, which put in place a cap similar to the one proposed in SB 2. Ultimately, the state saw a diminished ability of schools to keep up with increasing academic standards.

When Sen. Kelly Hancock (R-North Richland Hills) argued that the state has provided sufficient funding to cover enrollment growth and inflation, Lavine countered that the formulas do not adequately address inflation. He suggested the basic allotment of funding given to districts be linked to a cost driver so that it increases automatically with inflation and does not remain stagnant.

Texas AFT is opposing the bill, since there is no indication that the cap won’t be a long-term recipe for reduced funding to schools. A much better way for the state to reduce property taxes would be to significantly increase state aid to public education to make up for the dwindling state share of funding our schools. If public school districts were given the necessary resources to provide a quality education to students, then local tax collectors would not be forced to raise taxes to cover inflation, to maintain or reduce class sizes, or to attract and retain the best teachers. (Cities and counties are in opposition to the bill as well, noting that it would constrain their ability to provide needed services.)

However, four of the five members of property tax committee are sponsors of the bill, which suggests it should have an easy path to the Senate floor.