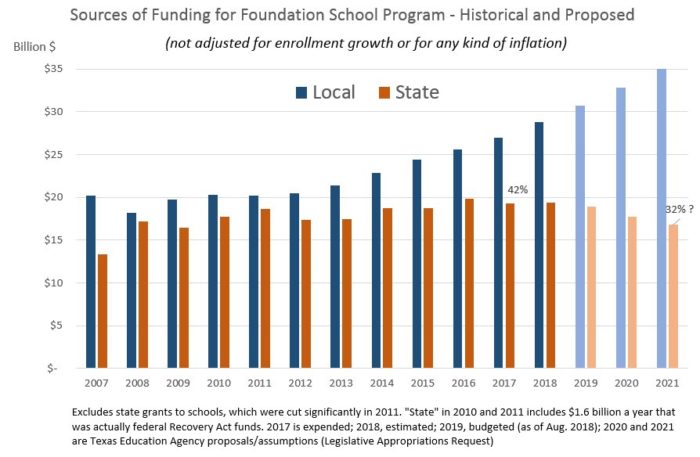 The Texas Education Agency laid out its preliminary budget request for public education funding Wednesday at a Legislative Budget Board meeting, which ended up highlighting one of the key problems with the direction we’re heading funding our schools–an increasing share of that funding coming from your local property taxes instead of the state.

Education Commissioner Mike Morath told state leaders TEA would require $3.8 billion less in state funds for the coming biennium–even to meet ever-growing enrollment–because previous legislation automatically pegged property tax growth at 6.77 percent. That then leaves the state needing less to make up the total projection of what’s needed to fund schools at the level they are at now.

“The state needs to kick in their fair share,” said special education advocate and parent Heather Sheffield to the panel Wednesday, as reported by the Texas Tribune. “Property taxpayers are fed up with the fact that the state is not funding public education.”

The state’s share of public education funding has dropped from 43 percent to less than 38 percent in recent years, and if the aforementioned budget proposal from TEA went through, that share would drop to as low as 32 percent, with local property taxes then making up roughly two-thirds of funding. So when you hear state leaders like Lt. Gov. Dan Patrick pledging to roll out schemes to supposedly lower your property taxes, remember that the best driver in lowering them would be increased investment by the state in public education.

It’s important to note that this budget is preliminary, and that the real architects of school funding will end up being legislators responsible for crafting a state budget this spring in the next legislative session. Still, the figures outlined by Morath had plenty of folks at the Capitol wondering if this was a portent of Patrick and Gov. Greg Abbott continuing their path of disinvesting state money in public education.

Check out our previous coverage of the impacts on pensions of changes to assumed rate of returns at the Teacher Retirement System of Texas, as well as the House Appropriations Subcommittee’s hearing on retiree health care.

On Wednesday, TRS officials told the Legislative Budget Board that with changes in the assumed rate of return, the Legislature would need to increase contribution rates to the pension fund by 1.82 percent for the fund to remain sound.

Regarding retiree health care, officials said at least $400 million is needed to avoid any premium increases or benefit cuts.

Remember the Alamo, correctly, and debate over the Civil War

The State Board of Education met this week, with an agenda item to look at possible changes to Social Studies curriculum, which always gets a lot of attention, with this meeting no exception.

We’ll let the media update you on the coverage of the SBOE decision on keeping the word “heroic” in the curriculum standards (as well as the battle siege letter from Col. William Travis) to be learned about the Alamo–an issue that quickly was determined to be more political theater than any actual attempt to change views of the Alamo defenders.

But how the Civil War is portrayed became a focal point of the debates, as many educators and scholars maintain that current curriculum waters down the role of slavery as the cause of the war, with states’ rights and sectionalism given an equally prominent place. We’ll update you next week on any significant changes to curriculum after the board wraps up its meeting this morning.

On Thursday the SBOE Subcommittee on School Initiatives unanimously rejected a rule approved by the State Board for Educator Certification that would have significantly reduced the number of pre-service training hours from 180 to 110 for those seeking to teach Career and Technical Education in the areas of Trade and Industrial Workforce, Marketing, or Health Sciences. (The full SBOE board also voted to reject the rule.)

HB 3349 was passed by the Legislature in 2017 to provide abbreviated training for trade and industrial courses.  However, this rule significantly expanded the intent of the bill by reducing training in two new areas not deliberated before the Legislature and by allowing training to be provided by entities not verified by TEA to provide educator preparation. Pedagogical content knowledge is a critical factor in teacher training, and a teacher knowing how to teach a certain content area is a proven predictor of student success. Content and pedagogy are integrated, and we support the School Initiatives Subcommittee members rejecting a rule that would have diluted the amount of training received by candidates.