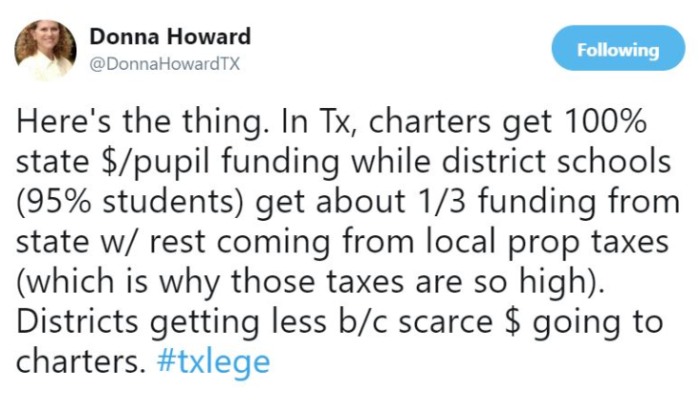 Pointed questions around the expansion of charter schools and the negative impact they have on existing public schools continue to surface, even while the Texas Education Agency has ramped up its cheerleading for charter schools and a controversial bill promoting partnerships between charter schools or nonprofits and school districts.

The Texas House Public Education Committee held a hearing on August 8 to examine if “changes are needed in the granting, renewal, or revocation of charter schools, including the timeline for expansions and notification of expansions to surrounding districts” as well as  considering “differences in state funding for charter schools compared to their surrounding districts and the impact on the state budget.” You can find our statement on the hearing below.  Much of the hearing, however, highlighted SB 1882, a bill from last session that incentivizes “partnerships” between school districts and charters or nonprofits at low-performing campuses by providing more per-pupil funding and granting a reprieve from harsh accountability sanctions. Under another law, HB 1842, the state must close a campus or take control of the entire district if a campus is low-performing for three years in a row, and thus SB 1882 provides a tempting path for districts seeking a reprieve and more funding. (Controversy has surrounded districts seeking to use the law, including a lawsuit in San Antonio ISD, a contentious board hearing in Houston ISD, and our local union’s successful effort to stop implementation in Pharr-San Juan-Alamo ISD.)

Several hearing witnesses promoted SB 1882 without noting the problems, which are numerous, with the bill. In essence, the bill can allow for the takeover of neighborhood school campuses (and even entire districts) by charter schools, without assurance that the rights of teachers and students will be maintained.

TEA also is advocating the use of its Transformation Zone Program, which is intended to assist districts in planning “interventions” at multiple campuses, including “partnering with an open-enrollment charter school to operate a campus or campuses….” With this program, TEA is using its Title I federal dollars–money designed to help low income children–to pay millions of dollars to out-of-state so-called technical assistance providers to come in and encourage school districts to partner with charter schools. Note that there is no evidence that partnerships with charter schools have done anything to help low income students, and many charter schools locate them selves in neighborhoods with high concentrations of poor kids and then end up serving a more affluent population.

Meanwhile Texas AFT and others are pointing out the problems with charter-school expansion. We’ve written on how charter schools drain money from public school districts, and State Rep. Donna Howard of Austin summed it up succinctly in a July 18 tweet: “Here’s the thing. In Tx, charters get 100% state $/pupil funding while district schools (95% students) get about 1/3 funding from state w/ rest coming from local prop taxes (which is why those taxes are so high). Districts getting less b/c scarce $ going to charters.”

To put it in non-tweet form, Howard notes that public schools serve 95 percent of all students, and charter schools serve 5 percent. Yet charters get 100 percent of their per-pupil funding from the state, while traditional public schools get about a third, with the rest coming from local property tax revenue. Scare state money thus is going to charters and impacting district funding and tax rates.

Politifact rated her claim as “Mostly True,” and you can dive into the details here.

As Politifact pointed out, “Howard was reacting to a national Associated Press news story on billionaires championing charter schools. Since 2006, the story says, philanthropists and their private foundations and charities–topped by the Walton Family Foundation, run by heirs to the Walmart fortune–gave almost half a billion dollars to 52 state-level charter support organizations to sustain, defend and expand the charter schools movement.

It’s time to take a ‘Time Out’ on charter schools and not allow any expansion of charters until we answer some key questions about how they impact our neighborhood schools.

What we’re seeing is charter schools proliferating rapidly in several urban areas, and with each student that a charter enrolls, the public school district in that area loses funding. In some cases districts take a double whammy, because the loss of students ends up making the districts pay more in recapture—known as Robin Hood—payments to the state. We also have seen substandard results in academic achievement and ongoing abuses and criminal charges related to charter-school finances across Texas, so there’s certainly no need to keep expanding the system with dozens of new charter campuses each year without first getting firm numbers on the financial impacts and performance of these charters.

Unfortunately, many new charters also carry the ideological baggage of an agenda for privatizing our public schools. Three of the four charters granted in June are systems funded significantly by the Walton Foundation (created by the founders of Walmart), which openly states its goal for mass proliferation of charter schools across the country.

Currently, Texas law does not require a thorough analysis of how a new charter school will affect surrounding neighborhood public schools before the charter school is opened in an area. Nor is there a requirement that taxpayers be notified or consulted about how additional local taxes will be sent to the state in the form of recapture funding as a result of charter school saturation in particular Texas school districts. Texas needs those reforms put in place, and until that’s done, we need a ‘Time Out’ on charter school expansion.