The April 20 Hotline reported the continuing health-care cost increases and benefit cuts facing current Texas school employees, spotlighting the damage incurred by TRS-ActiveCare participants as a result of stagnant state contributions that cover less and less of the costs. An upcoming Hotline will fill in the details of the damage, but first let’s recognize that this latest hit is just one part of a much bigger story, national in scope, of a sustained assault on public workers.

The April 22 edition of The New York Times explains this wider context in an article entitled “Public Servants are Losing Their Foothold in the Middle Class.”The portion of the article quoted below tells the gist of the story:

The anxiety and seething anger that followed the disappearance of middle-income jobs in factory towns has helped reshape the American political map and topple longstanding policies on tariffs and immigration.

But globalization and automation aren’t the only forces responsible for the loss of those reliable paychecks. So is the steady erosion of the public sector. 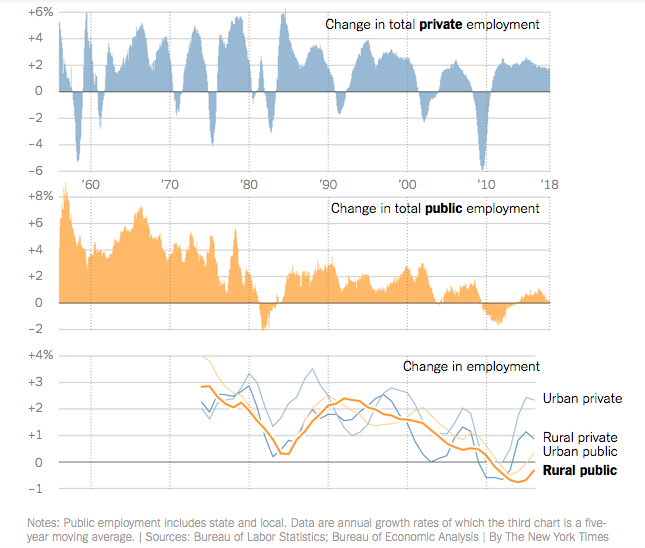 For generations of Americans, working for a state or local government–as a teacher, firefighter, bus driver or nurse–provided a comfortable nook in the middle class. No less than automobile assembly lines and steel plants, the public sector ensured that even workers without a college education could afford a home, a minivan, movie nights and a family vacation.

In recent years, though, the ranks of state and local employees have languished even as the populations they serve have grown. They now account for the smallest share of the American civilian work force since 1967.

The 19.5 million workers who remain are finding themselves financially downgraded. Teachers who have been protesting low wages and sparse resources in Oklahoma, West Virginia and Kentucky–and those in Arizona who say they plan to walk out on Thursday–are just one thread in that larger skein.

You can read the full Times article here:  https://www.nytimes.com/2018/04/22/business/economy/public-employees.html.