Join us for a Facebook Live Happy Hour (and on YouTube) today from 5:30 p.m. to 6:30 p.m. Maxie Hollinsgworth, a Houston Federation of Teachers member, will be moderating a panel with state Reps. Alma Allen, Gary Van Deaver, and Dr. Walter Stroup on all things STAAR.

And how to #StopSTAAR
Texas AFT also launched our #StopSTAAR map last week. Put your name on the map as a school employee, parent, or student who stands in solidarity to stop STAAR testing this spring. And if you haven’t written a letter to TEA Commissioner Mike Morath demanding he stop the STAAR this year, please click here to send one now!

The STAAR test is one of the most controversial topics in Texas public education. Educators will be asked to administer the STAAR test during the pandemic and students are being asked to take the test in-person. We’re bringing together a panel of testing experts alongside AFT members and legislators to talk about accountability and testing.

Education Commissioner Mike Morath said Thursday that if parents of remote learners are concerned about the safety of sending kids to school to take the STAAR test, they can simply have them stay home. However, Morath said, “It’s not opting out of the STAAR test… .It’s opting for remote instruction….so their kid won’t sit for the STAAR exam.” (There are no plans for remote testing.)

Morath already waived the requirements to pass STAAR for grade promotion and the use of results for district and campus accountability ratings. He didn’t go into further detail on the impacts of students who choose to stay home and sit out of STAAR End of Course exams—which are still required, although there are other paths to graduation.

Texas AFT President Zeph Capo said, “Our message to Morath is that our kids and educators have been through enough hardship in the past year and don’t need the useless burden of weeks of test-prep and testing for scores that won’t be valid. Our message to all parents is that they should be in control of this decision and not under any intimidation from their school district for not sending their child to take the STAAR test.”

Lawmakers ask for STAAR opt-out mechanism, budget writers get to work, and a state senator belittles our pensions 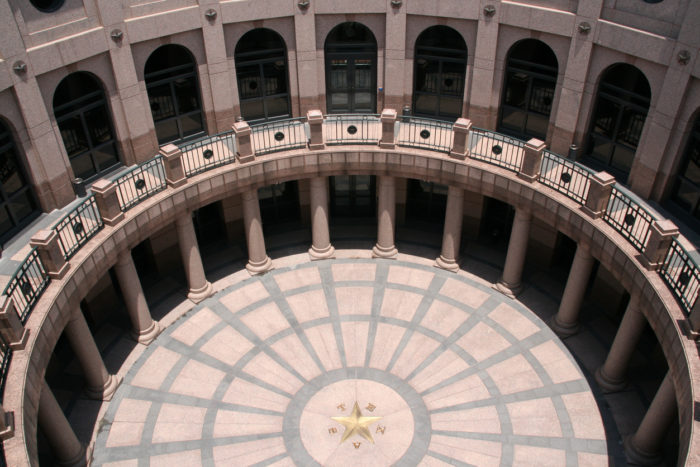 This week, state Rep. Diego Bernal (D-San Antonio) and 67 of his House colleagues, including House Public Education Committee chair, Rep. Harold Dutton, Jr, signed a letter to Education Commissioner Mike Morath to “request the Texas Education Agency create a formal mechanism for students and families to opt-out of the 2020-2021 administration of the State of Texas Assessments of Academic Readiness (STAAR) exams.” The request adds to a chorus of legislators objecting to the STAAR test , echoed by a Tuesday op-ed from Texas AFT President Zeph Capo in the San Antonio Express-News.

Bernal and his colleagues write, “Requiring that all students be in-person for the administration of exams creates an untenable environment that puts students and school personnel at immense risk of transmission. Since it is evident that the Agency has no plans to seek the federal waivers necessary to cancel the 2020-2021 administration of the STAAR, something we strongly believe the Agency should reconsider, at a minimum it should allow students and their families the opportunity to opt-out of the exam.”

Budget writers get rolling
The Senate Finance Committee took a detailed look at state revenue and expenditures this week, specifically funding public pensions, like the Employee Retirement System for state employees, which will need an infusion in cash to keep the fund healthy. Committee Chair Jane Nelson (R-Flower Mound) indicated ERS is a priority, and she will be looking to “fill in the details” to address the fund this session.

One committee member—Sen. Charles Schwertner—made it clear, however, that we need to be on guard against attacks on our Teacher Retirement System of Texas pensions. Speaking of public pensions, Schwertner stated: “Are we not fooling ourselves in the sense that we can never shovel enough money into the quicksand foundation of pensions to make them solid long

term?….what are we doing to future generations of Texan’s and Texas workforce by having a pension system in this financial environment?”

Texas has neglected our public pensions for years with low contributions. Schwertner’s comments represent a line of attack over the past decades that seek to turn defined-benefit pensions into 401(k)-style plans at the mercy of volatile markets and without guaranteed benefit payments.

And next week…Celebrating School Employees! 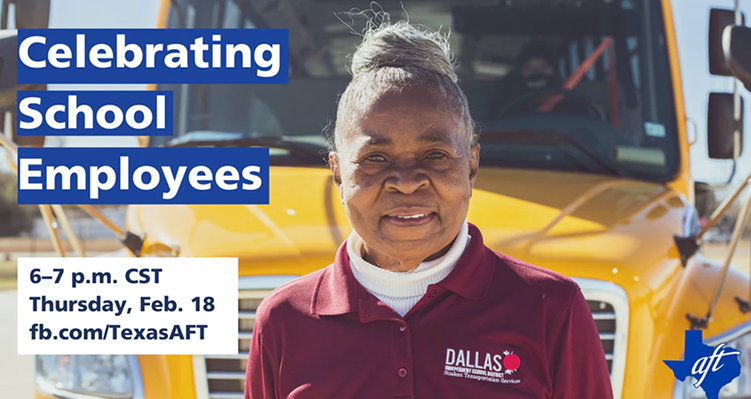 We want to celebrate the contributions of school employees like bus drivers and cafeteria workers. Texas AFT is working to make sure the voices of school employees are heard in the 87th Legislature. We will be joined by Rep. Terry Canales and Rep. Michelle Beckley on a panel of AFT school personnel moderated by Cy-Fair AFT President Nikki Cowart.

Join us for a Facebook Live Town Hall next week on Thursday for this important discussion! 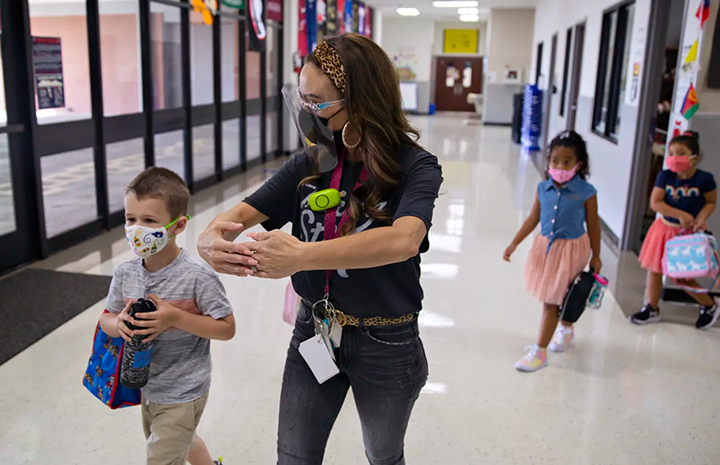 The Texas State Board of Education wrote a letter asking the COVID-19 Expert Vaccine Allocation Panel (EVAP) to add public school teachers and staff to Phase 1B for vaccination priority. The letter cites the challenges that the public school system faces with increased in-person instruction during the pandemic. The letter also highlights the rise in teacher quarantines due to exposure to COVID-19 and the lack of substitute teachers as another key issue.

In an online conversation with the Texas Tribune Thursday, Morath encouraged districts to give accommodations to educators with health-comprised situations, but he stopped short on lobbying the EVAP for school-employee 1B status. Texas AFT President Zeph Capo responded: “We are extremely disappointed in Morath–who should be a chief advocate for educators–and his lack of leadership on vaccinations to keep us safe. He refused to say whether he thinks teachers should be included in the 1b tier for vaccinations, as the CDC recommends.”

Good bills of the week:

SB 612 Judith Zaffirini (D- Laredo) calls for school district employees to be eligible for workers compensation benefits for COVID-19—if contracted before February 1, 2020, it will be assumed that the virus was contracted during the scope of employment.

HB 1748 Ernest Bailes (R- Liberty) would require the commissioner of education to notify the superintendent, board of trustees, and each member of the Legislature of all charter expansion requests in their district/area. Additionally, it creates much-needed limits on open-enrollment charters’ ability to increase maximum allowable students, creation of new campuses, extending grade levels, and expanding a charter’s geographic boundary. This bill increases charter transparency, accountability, and oversight while also defining the commissioner’s powers. 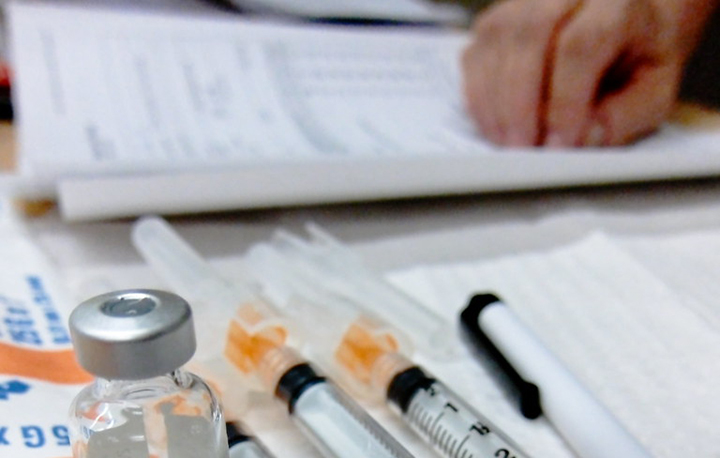 Months of hard work and organizing by Texas AFT members in Judson ISD culminated with the long-awaited arrival of improved COVID-19 testing. Associate Membership Program (AMP) members reiterated that the district’s COVID-19 plan wasn’t going far enough to keep students and staff safe. Staff organized a car caravan and other actions in protest. At times, members felt like they weren’t getting traction, but their sustained efforts finally persuaded district leadership they needed to do more to keep campuses safer with enhanced testing that is more accurate, targeted, and timed right to help pinpoint infections. 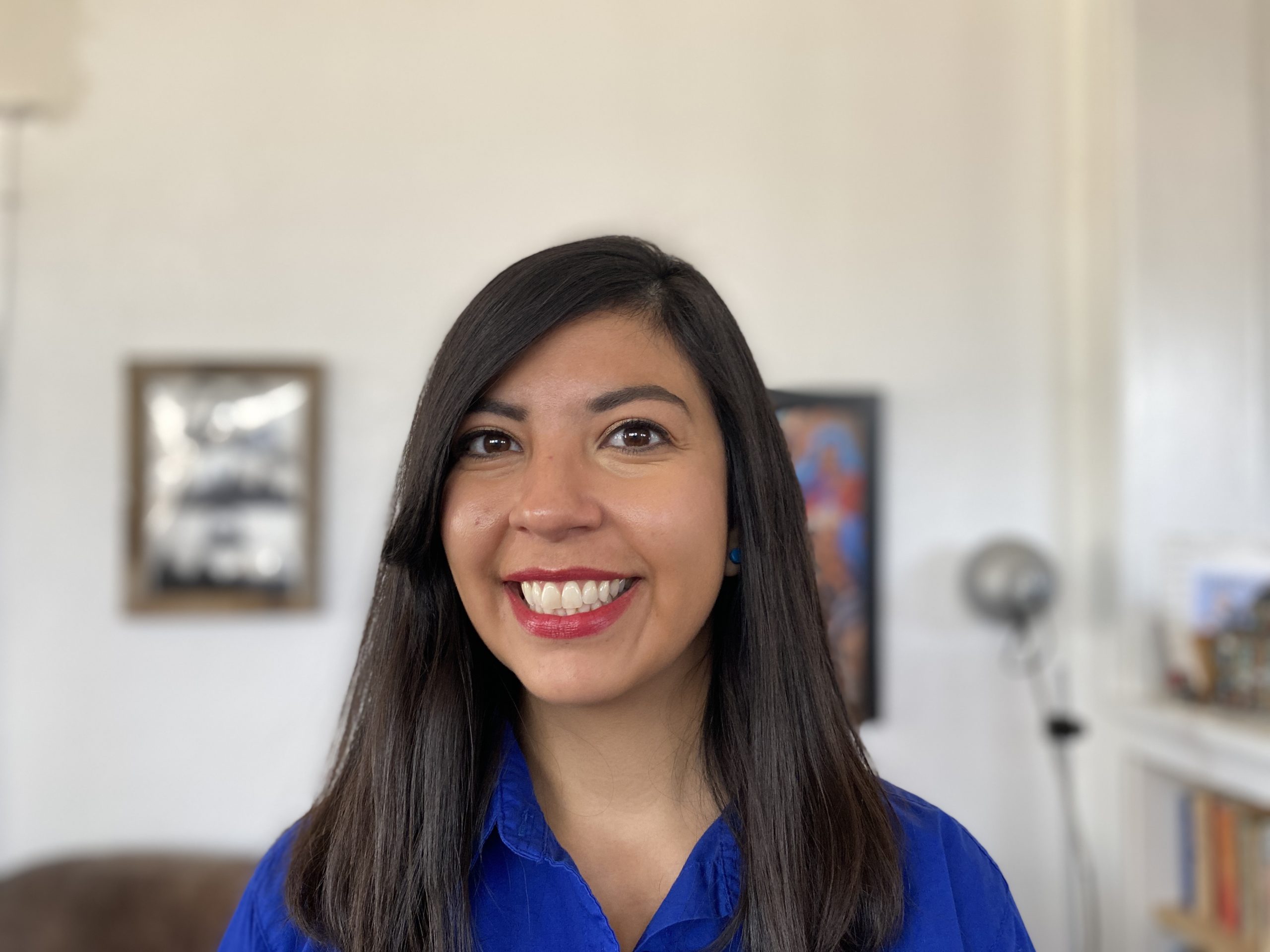 Lopez, now in her first year as president of our union representing San Antonio ISD employees, has stepped up to make safety her top priority. A San Antonio native and former second-grade teacher, she has mobilized members to be active on their campuses and ensure safety protocols are met.

“Our approach has been to start organizing at our worksites,” she said. “That means everything from holding worksite meetings to identifying safety concerns at the district and community level. It’s important that we’ve been coordinating with other unions, community members, and coalitions to put pressure on the school board and the superintendents. We’ve been trying to address the micro and the macro issues.”

Lopez and the Alliance also came to the defense of a member put on administrative leave for trying to organize school employees around safety issues. He was reinstated within a week.