Thanks are due to all those who responded on short notice to our call for letters to the Texas Senate State Affairs Committee, urging the committee to counteract erosion of pension benefits and steep health-care cost increases​ burdening both active and retired school employees. Remarks of committee members at the April 4 State Affairs hearing made it plain they are conscious of rising discontent with deteriorating benefits. Whether the Legislature that emerges from the 2018 elections will do much to remedy the situation remains uncertain, but lawmakers cannot claim they are in the dark about the need for overdue benefit improvements funded by increased state contributions.
Some important points were clearly established in the course of the hearing. For example, State Pension Review Board vice-chair Keith Brainard affirmed the superior value to employees of pension plans with defined benefits, as opposed to individual retirement accounts that leave benefits dependent on ups and downs of stocks and other investments.
Brainard warned, though, that underfunding is a hazard of the Texas system, which relies on legislatively fixed contribution rates rather than allowing rates to rise as needed to meet future obligations. Brainard noted that in comparison with other states’ contribution rates, the state contribution rates in Texas are extremely low. (In fact, the Texas rate for TRS is the lowest in the nation by far for any state where most school employees are excluded from Social Security and hence have greatest need for a secure and substantial state pension.) 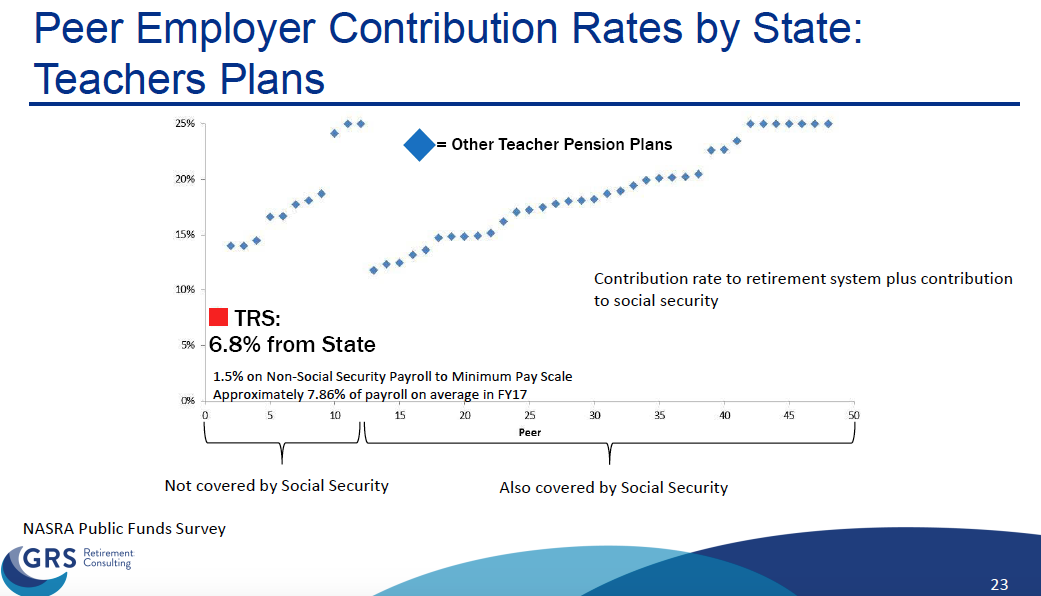 When Sen. Charles Schwertner (R-Georgetown) suggested that the state’s defined-benefit pension plans are unsustainable, Brainard pushed back hard. “I categorically reject” that argument, Brainard said, reaffirming the superiority of guaranteed-benefit plans—and the need to fund them properly.
Also discussed at the hearing was a key technical decision soon to be made by the TRS board of trustees that will have big implications for the funding levels deemed necessary to cover pension obligations in the future. The TRS actuary has recommended lowering the assumed rate of return on investments for the pension fund to 7.25 percent from the current 8 percent. The change would mean that investment earnings would not be expected to cover as much of future pension needs as previously supposed, triggering a need for higher contributions now to make up for the projected earnings shortfall. But those higher contributions would have to be enacted by the Legislature.
The TRS actuary and TRS officials at the hearing acknowledged under questioning from committee members that a less-drastic change, to an assumed rate of return of 7.5 percent, would be reasonable. The actuary for the Pension Review Board, Kenneth Herbold, said it was important to be neither overly optimistic nor overly pessimistic about projected investment returns. For his part, PRB vice-chair Brainard said that an assumed rate of return of up to 7.75 percent would be reasonable. The TRS board will decide the issue on April 20; look for further Hotline coverage and action alerts as this meeting date nears.
Texas AFT legislative spokesman Ted Melina Raab delivered testimony reinforcing the case for increased state contributions to improve pension benefits, regardless of what rate of investment return is assumed. And he called on the committee members to champion health-care cost relief for both active and retired school employees, who absorbed major cost increases under legislative changes enacted last year.
Sen. Jane Nelson (R-Flower Mound) and committee chair Sen. Joan Huffman (R-Houston) portrayed last year’s cost increases and benefit cuts as necessary in order to preserve any health plan at all for retirees in the face of ballooning expenses. However, said Sen. Nelson, “I wasn’t flooded with thank-you letters.”
TRS executive director Brian Guthrie said that the TRS-Care plan for retirees will still be short $400 to $600 million for the 2020-2021biennium, even after the draconian actions taken last year, largely at retirees’ expense, that shaved more than $3 billion from future costs. The real problem here is that for more than 30 years the Legislature has tried to provide a retiree health plan on the cheap, using pay-as-you-go stopgaps and never providing the secure and sufficient funding streams needed to cover anticipated costs. Now our job is to make legislators see it as their job finally to fund health-care benefits as they should have done long ago, not to keep cutting benefits and shifting costs further onto active and retired employees. When lawmakers take care of that long-postponed business, the thank-you letters will be warranted.