Under pressure from the Texas Education Agency to contract out struggling campuses to a charter-school operator, Houston ISD trustees nonetheless have decided not to proceed with a proposed charter contract—after hearing from parents and educators who question whether the forced charterization would benefit the children affected. 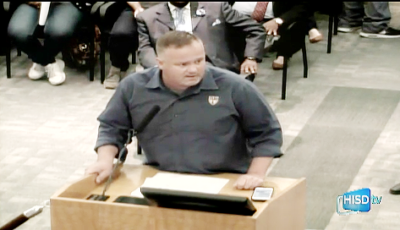 raised about the particular charter entity that would have taken over 10 district campuses under the stalled proposal, leaving him with “no confidence that this is in the best interest of children.”  Among the issues brought up by HFT at a press conference earlier in the week were concerns about the financial dealings of the Energized for STEM charter operator and the track record of its existing charter schools relating to administrator salaries, academic quality, treatment of teachers, and responsiveness to parental concerns. At a tumultuous board meeting this week, some parents raised still more concerns, including issues regarding special-needs students.

By mid-week, HISD trustees announced they would not move forward with contracting out the 10 campuses at issue. If any of those schools receive an unacceptable (“improvement required”) this August, based primarily on standardized test scores, state law gives the commissioner of education authority to suspend the powers of the democratically elected school board and hand the district over to his own appointed board of managers. He also could choose to close any persistently low-rated campus. There is some leeway to close and reopen a school with new staff, serving new grade levels in a substantially different program—but that too is at the commissioner’s discretion.

Many members of the Houston community, which is still striving to overcome the harm caused by Hurricane Harvey, are holding out hope that TEA will suspend school rankings and sanctions this year because of the educational disruption caused by the storm and ensuing flooding. However, TEA has said no decision on such waivers for disaster areas will be announced until June.

Meanwhile, HFT along with parents and community stakeholders continues to develop a better approach to school improvement, with a strong track record of success in other parts of Texas and the nation. That is the community-school model, which is in the works at many HISD campuses. Community schools are developed by parent-teacher-community partners who come together to identify and marshal the services that students at a campus and their families need to support academic success. This model is especially valuable and effective for struggling campuses that must develop a turnaround plan that meets state requirements. Community schools would seem particularly well-suited to a region still in great need of help to recover from the manifold traumas suffered by children and their families due to Hurricane Harvey.