Our members set records for voting and participating in election events 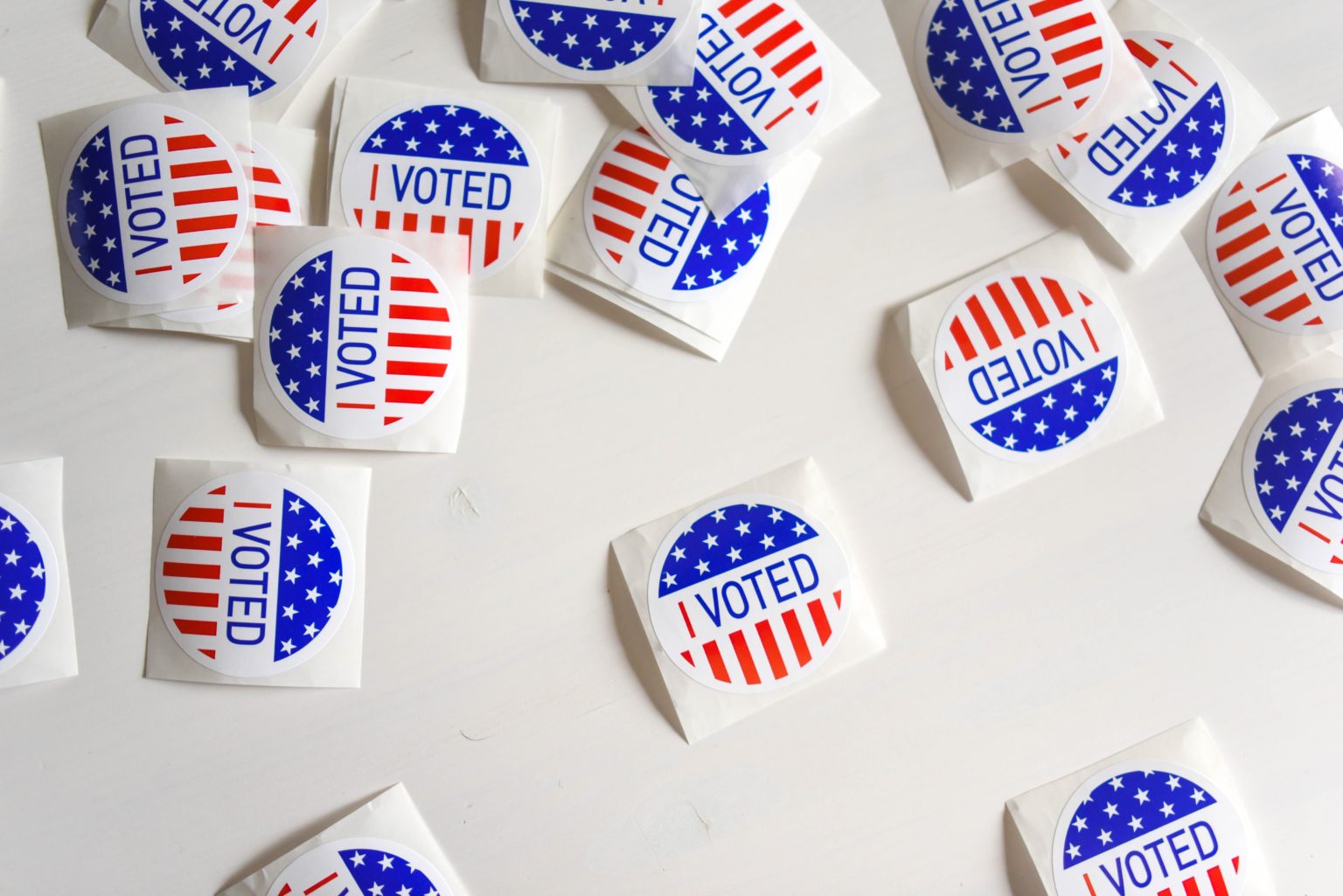 In 2020, Texas AFT ran an unparalleled educator-led political program that turned out a record 96,000 of union educators, former members, and retirees for pro-public education candidates up and down the ballot, helping break early voting records across Texas in the process. Texas AFT members made significant member contributions to incumbents and challengers in competitive districts across Texas:

In the first year in which the changes from Texas’ school finance bill, HB 3, took effect, the Texas Education Agency is reporting that teachers on average received significant raises, but that doesn’t sit right for many teachers who are questioning the math and looking at their paychecks.

Upon the announcement of these numbers, Abbott and Lt. Gov. Dan Patrick were quick to take credit for what they termed as “historic” raises. The real story is that educators electing pro-public education candidates in 2018—along with a rosy state budget picture—led to a bipartisan effort for a substantial investment in our schools.

But teachers took to social media to share stories questioning these averages. The report relied on district-submitted, unaudited data in a standard spreadsheet template from TEA. (If your district is one of the 1,019 that reported, you can find the data here.) Texas AFT has many questions about how some districts reported compensation. For instance, TEA included in these average increases any “new or increased employer funded benefits.” So an increase in a district’s contribution to your health insurance premiums would be counted as a pay raise, even if your premiums stayed the same (or even went up).

Districts have until December 1 to report their data, but TEA conveniently handed its totals to the governor just before the general election to give him some bragging points. Nevertheless, we do know that HB 3 provided a much-needed boost to teacher salaries, which are still thousands of dollars below the national average. We also still do not completely know how the economic losses of the last year will affect the state budget in the next biennium. State funding is tied to various economic factors, so we will not get a clear picture of how this will play out until next year. No matter what, Texas AFT will continue fighting to ensure that Texas teachers get a fair deal.

Leaders of the state’s education agencies and state schools told budget officials Thursday that funding cuts of 5% mandated earlier this year needed to be restored to provide vital services to their constituents. The Legislative Budget Board (LBB) held public budget hearings and heard from the Texas Education Agency (TEA), the Texas School for the Blind and Visually Impaired (TSBVI), the Texas School for the Deaf (TSD), Teacher Retirement System of Texas (TRS), The Higher Education Coordinating Board (THECB), as well as state colleges and universities throughout the day. Each agency outlined key appropriation asks and priorities for the coming budget cycle. The narrative for most of the agency requests followed the same pattern, an acknowledgment of the state’s economic trouble followed by a plea to restore funding that agencies were asked to take because of the budget shortfall.

Superintendents from the TSD and TSBVI both testified about the difficulties facing their students in light of COVID-19 and how the services provided by their schools are needed now more than ever. Both superintendents say that without restoring funding from budget cuts they will not be able to meet the needs of students and families in the state and our state’s most vulnerable students will suffer.

Education Commissioner Mike Morath with TEA said his core request was a continuation of the funding already provided, incorporating the 5% cut and the funding of the Foundation School Program. However, Morath asked for additional funding for impacts of the pandemic, and he called attention to how disproportionate the effect of COVID-19 is on middle and low-income students, with heavier burdens on low-income students. The additional funding would be a targeted investment in these students, he stated.

Brain Guthrie, TRS executive director, outlined a request for a modest increase in funding, focusing on maintaining the state’s contribution to the retirement system, as well as its contribution to the TRS-managed healthcare programs. The request also included $3 million in administrative costs for opening a pilot office in El Paso and $5.8 million for 25 new employees, which he said would help the agency save millions more in the future.

THECB is requesting the restoration of the funding and $110 million to be approved to help keep up with the growing need for financial aid, as well as funding for specific programs.Harrison Keller, commissioner of higher education, said the additional funding includes money for upskilling and reskilling adult learners seeking further education—an important investment in the state’s economic rebound—and money for improving and supporting data security and system development. Keller’s concerns over resources for financial aid and improving programs for students were echoed by many of the university and college presidents who testified after him. 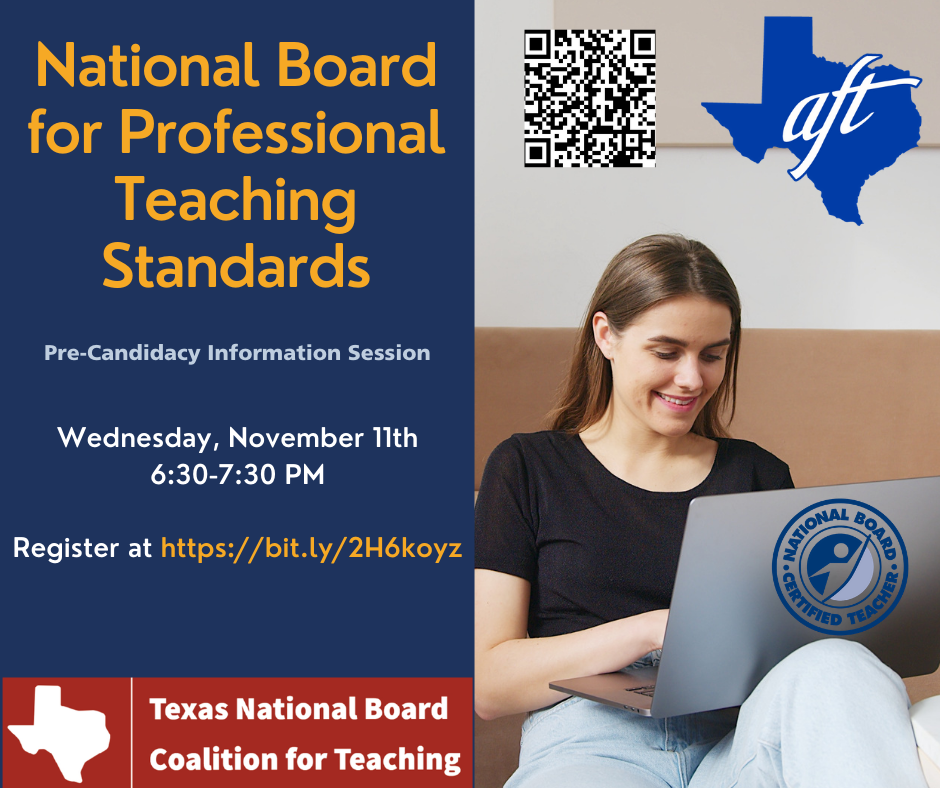 Learn more about National Board Certification

Texas AFT is hosting a virtual information session to introduce teachers to National Board Certification, a curriculum for teacher effectiveness that creates excellence in teaching. Texas AFT has long supported the program and has shepherded many members through the process. Our union also ensured that National Board Certification also is one of the factors recognized for teacher rankings in the state’s new Teacher Excellence Initiative. 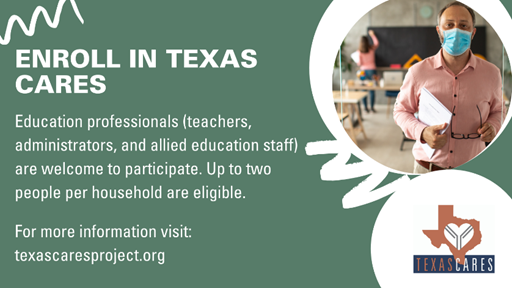 The Texas Coronavirus Antibody Response Survey (Texas CARES) led by the UTHealth School of Public Health and the Texas Department of State Health Services (DSHS) will conduct about 31,500 antibody tests for the Texas education workforce, in addition to thousands more for other populations. The antibody tests—which are designed to detect a past infection or one that has been present for a significant amount of time—are administered free of charge, and participants will receive their individual results after each sample is taken. Participation is voluntary and will be handled on a first-come, first-served basis, and all results are completely confidential. For more information about participating in the study see the Texas CARES site. 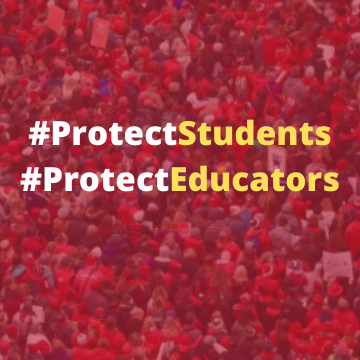