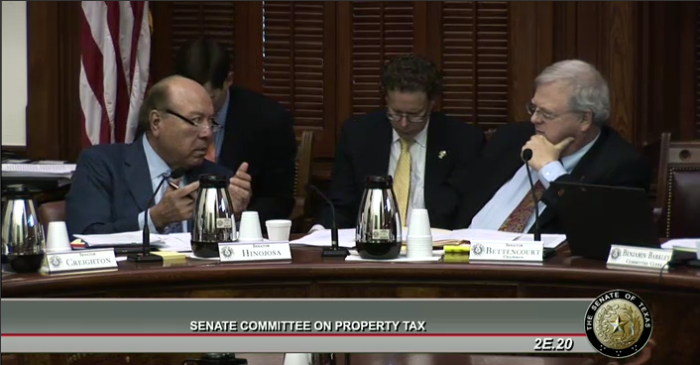 Sen. Juan “Chuy” Hinojosa questions SB 2 author Sen. Paul Bettencourt on why the tax cap should be as low as 2.5 percent.

With no additional public testimony, the Senate Committee on Property Tax voted yesterday to advance a bill that will cripple local government budgets, including school districts.

SB 2 would cap property tax revenue growth at 2.5 percent, unless voters approve to break the cap, and would apply to all entities with more than $15 million in taxes. (The current cap is 8 percent.) The non-partisan Legislative Budget Board estimates the bill’s cost to local jurisdictions at $7.4 billion dollars. This eye-popping estimate does not even include the cost to school districts, which the bill author promises will be covered by state revenue. Where this revenue will come from remains a mystery, leaving lawmakers to vote for the proposal on faith.

During the meeting, which took place in a backroom not easily accessible to the public, the committee adopted 15 amendments, including a provision to allow smaller jurisdictions to opt in to the bill, as well as one prohibiting taxing units from reducing first responder compensation based on a reduction in the rollback rate—effectively handcuffing local governments into unsustainable budgets. Texas AFT continues to oppose this damaging bill.

All four Republicans voted to advance the bill, with the lone Democrat voting “present.” The number of lawmakers calling for the Legislature to first pass a school finance bill—to ensure the local revenue lost with the tax cap wouldn’t interfere with new funding for public education—has grown in recent days. But that isn’t deterring backers of the bill, which could be heard on the Senate floor as early as next week, especially with Lt. Gov. Patrick indicating he may bypass the senate rule requiring three-fifths of senators to allow a bill to come to the floor.