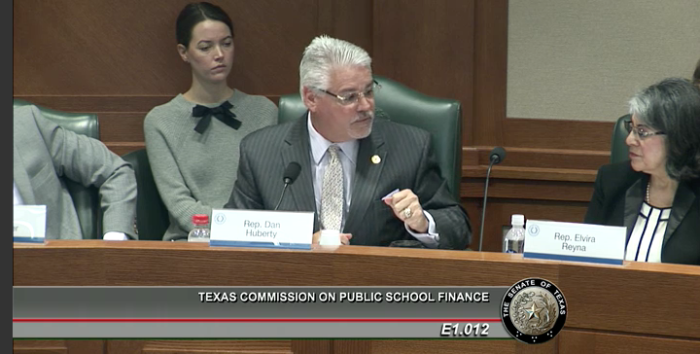 This week we’ll take a closer look at the Texas Commission on Public School Finance’s working group recommendations, which could result in less equity among districts and fewer students identified for gifted and talented services.​ The commission met last week to discuss 22 preliminary recommendations from its Expenditures Working Group.​

Among the Expenditures Working Group’s “Reallocation and Savings” recommendations, is one to eliminate the Cost of Education Index (CEI), which has not been updated since 1991 and is based on 1989 -1990 district characteristics such as size of district, teacher salaries of neighboring districts, percentage of low-income students in the district.

The working group predicts a “savings” of $2.9 billion dollars for the biennium if the CEI is eliminated. The rationale used by the working group is that the CEI adjustments that are based on regional costs that were adopted almost 30 years ago are no longer valid. The CEI formula is outdated, but as a mechanism it has worked well as an equity tool that accounts for unique district differences. Instead, the recommendation should be to update this outdated formula and provide additional state funding so that the index can continue to assist districts and possibly more districts in need as it was intended to do.

Another recommendation by the working group is to eliminate the Gifted and Talented (GT) Allotment for a “savings” of $165 million. Rep. Huberty and Sen. West assured that this would not eliminate the GT program, claiming the same result can be achieved by distributing the same funds through the basic allotment. Statutory requirements regarding educational programs for gifted and talented students will remain in effect. However, Dr. Doug Killian, superintendent of Pflugerville ISD, expressed concern that if the funds are not specifically earmarked, not enough may be spent on GT students, and that could result in under-identification of GT students. Melissa Martin, Career and Technology teacher from Galena Park ISD, had similar concerns about the GT funds being consolidated into the basic allotment. Martin rightly wondered what assurance there would be that the funds would actually reach the students in the classroom, and not be used for administration or other ancillary costs.

We will have more on the Expenditure Working Group’s recommendations later this week.

Stay tuned, as the commission expects to hold another six meetings before their final report is due on Dec. 31, 2018. (The archive video of this meeting is available here, with all meetings archived here.)