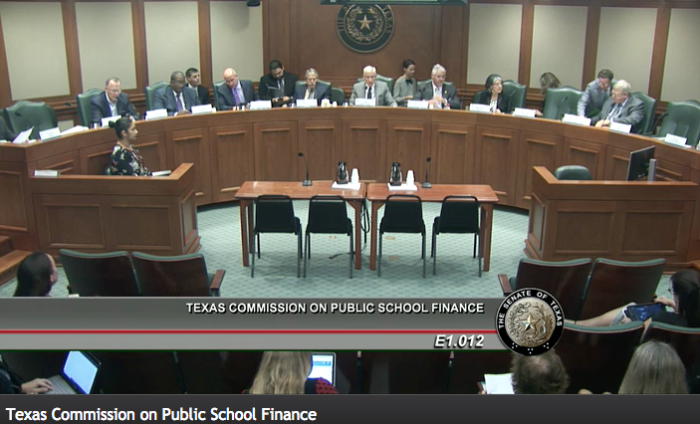 The Texas School Finance Commission met Tuesday to continue its work developing recommendations for public education funding. Although a final report is due from the commission, discussion Tuesday noted that there will be several more meetings of the body and its working groups through November and December. So, it’s likely that we won’t see final recommendations in all areas until just before the next legislative session begins in January.

The commission’s Expenditure Working Group did present its recommendations, including ideas for reallocation of some $5.3 billion in funds for education. The biggest change would be a $2.9 billion change in Cost of Education Index funding allocation. Additionally the group made several recommendations for changes in allotment funding for everything from transportation to district size to programs for dyslexia and dual language. You can find the full set of recommendations here. We’ll have more commentary on these recommendations in upcoming Hotlines.

Also heard Tuesday was discussion about a controversy involving Land Commissioner George P. Bush and his refusal to transfer mineral rights and real estate revenue to the State Board of Education–the typical process for providing that money to the Permanent School Fund. The move by Bush to instead send $600 million directly to the Available School Fund would be a first, and would result in less funding overall to schools. It’s a complicated process involving investment funds for both the SBOE and School Land Board–a three person board with Bush as chair. But the dust up could result in hundreds of millions of dollars in reduced funding to public education.

It will be interesting to see if the change in procedure by Bush–which some SBOE members claim is a strategy to claim more positive publicity for funding schools–will result in any changes in law next legislative session.

Texas AFT President Louis Malfaro stressed that Bush should not have changed the standard funding transfers without a serious discussion on the impacts to overall funding. “With all the fixes needed for school finance and the obvious need for more funding overall for our students, now is not a time to play games with hundreds of millions of dollars, particularly since Bush is promoting his campaign for Land Commissioner with the notion that he’s providing all this funding for schools,” Malfaro said. “This is the same land commissioner who has been promoting more funding for charter schools and is an open support of private-school vouchers.”

Bush recently told a gathering–as reported in the Longview News Journal–that he was ready to “take on the teacher unions” to promote charter schools and vouchers. Bush will face Democrat Miguel Suazo in the November 6 election for land commissioner.