The Texas Senate Select Committee on Violence in Schools and School Security held hearings Monday and Tuesday at the Capitol to hear recommendations on stopping gun violence at schools. The primary focus Monday was on changes or additions to the physical design of schools to increase safety, while a good portion of Tuesday’s hearing was spent discussing the two programs that allow for armed school employees on campuses and whether or not promoting “teachers with guns” was a good idea. 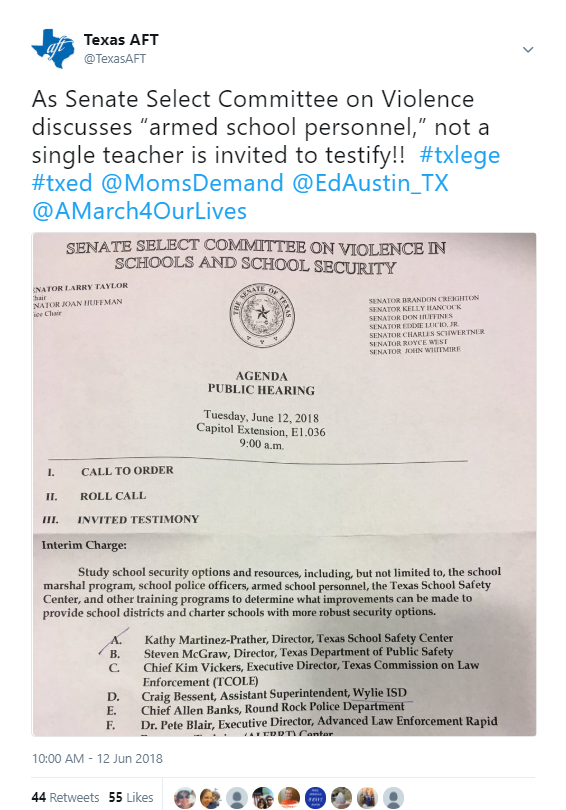 Unlike the “roundtable” gatherings convened by Gov. Greg Abbott last month to discuss the issue–which included only people hand-picked by the governor, with no teachers involved and no media coverage allowed–this week’s Senate hearings had a diverse group of people testifying before the committee with full access by the public and the media. (Although the invited witnesses who testified first didn’t include any teachers or students.) Packing the hearing room was a large contingent of Moms Demand Action for Gun Sense in America, which advocates “common sense gun law reforms.” The result was a consistent message from educators and law enforcement officials opposing the idea of arming school employees. Neil Loewenstern, an Austin ISD high school teacher, stressed the need to invest in more school counselors instead of prioritizing more guns in schools. “Keep investing in teachers to be better teachers and not security guards,” he said.

“I am here to speak today to the absurdity of arming our teachers,” said Mary Beth Metcalf, an Austin ISD kindergarten teacher and Education Austin member. “Let’s strengthen the network of resources available to support, comfort, and heal these children. Don’t ask me to carry a gun. Instead, please arm our schools with more school counselors and mental health professionals.”

An Austin American-Statesman reporter, Chuck Lindell, live tweeted the hearing and includes a good representation of witness comments. Scroll to the bottom of his story here. That said, the conservative faction of the Senate committee repeatedly lobbied for more armed school personnel with Sen. Don Huffines of Dallas even suggesting that rifles should be allowed for the Texas school gun programs–not just handguns–to give teachers a better advantage in a shootout.

Texas currently has two laws allowing school employees to carry firearms–the Marshall Program and the Guardian Program. The Marshall Program requires participants to undergo 80 hours of training, in addition to a license to carry a concealed handgun and passing a psychological exam. The Guardian Program simply requires a license to carry a concealed handgun along with any rules or training required by the school district. (It’s estimated that about 200 of some 1,100 school districts now take part in one or the other of the two programs with armed employees on campuses.)

Texas AFT and AFT national oppose arming teachers or other school personnel, unless they are resource officers or police assigned to campuses. Since Texas already has the two programs allowing armed school employees, Texas AFT’s position is to oppose an expansion of these programs. Arming teachers and other school employees is sure to be a continuing debate across the country and in Texas, where the governor and lieutenant governor have promoted the idea. But teachers overwhelmingly oppose the idea in polls, as do most law enforcement leaders who recognize that it could be extremely hard to know if someone carrying a gun in an active-shooter situation is the bad guy or a school employee.

The hearings did highlight something everyone seems to favor–more focus on mental health screenings, support, and treatment for students, as well as recognizing when students need assistance with mental health issues. Of course, the solution would be more resources for schools (meaning funding), which hasn’t been articulated as a priority for the governor, lieutenant governor or most conservatives in the Texas Legislature. “You want to talk about architecture, gun training?” said Sen. John Whitmire in the hearing, as reported in the Dallas Morning News. “Here’s a great witness and resource. He’s doing his job, he apprehends someone dressing abnormally. He refers to them as a mental health case and they come back in a week and have not received any treatment. And we wonder why we’re sitting here having this conversation.”

The Senate committee–appointed by Lt. Gov Dan Patrick–is planning more hearings on the issue, and likely will issue a report with recommendations in August. Speaker of the House Joe Straus also has issued a lengthy list of interim charges on school safety to several House committees with hearings planned.

In the meantime, it’s hopeful that lawmakers will commit to finding additional funding for more counselors and school psychologists, instead of fueling what certainly will be a fiery debate over arming more school personnel. For instance, one organization–the Texas Freedom Force, a group of open-carry activists–is planning a June 23 rally in Santa Fe, Texas, to support arming teachers. Their flier promoting the rally features schoolchildren playing on top of a pistol. 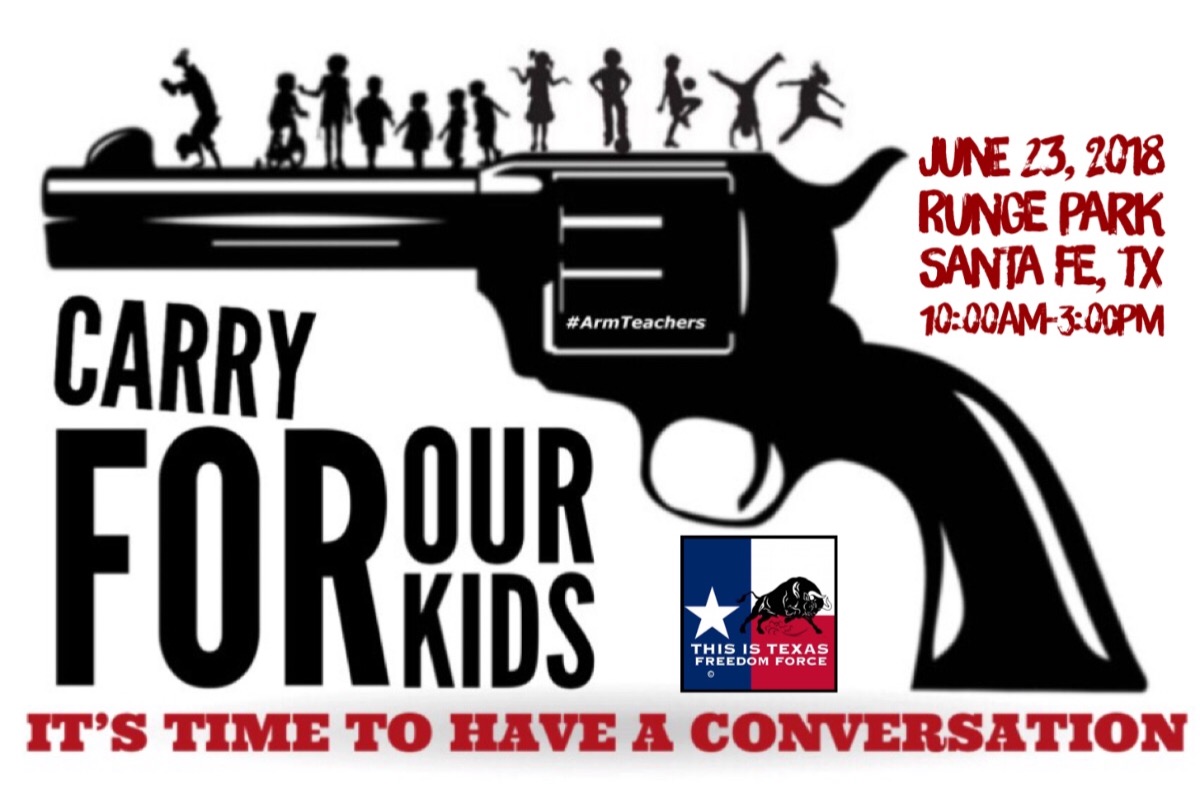