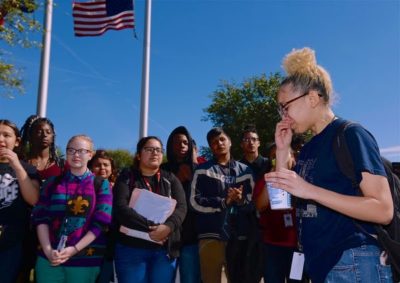 stricter enforcement of gun-safety laws on Friday in commemoration of the students who lost their lives in the Columbine High School school shootings 19 years ago.
The American Federation of Teachers joined student, education, and gun-safety groups in actions around the country as a core partner in the National Day of Action Against Gun Violence in Schools.
The #ProtectOurSchools coalition, which AFT helped form days after the mass shooting at Marjory Stoneman Douglas High School in Florida, coordinated thousands of events leading up to today’s anniversary, including voter- registration drives, citywide walkouts and walk-ins, rallies, and forums.
The day of action followed months of rallies, marches, school assemblies, prayer vigils, community-service projects and walkouts led by students from Stoneman Douglas and around the country. Teachers and other school personnel have joined their students in the movement, calling on legislators to take action on gun safety, or to expect repercussions come Election Day.
AFT President Randi Weingarten addressed themes of the day at the New York City Says Enough rally:

The students leading this movement have captivated our nation—their voices are simply impossible for the National Rifle Association to silence. It’s our kids who have sheltered in closets, who have lost their friends, who have written texts to their families thinking they had one last opportunity to say they loved them, who have taken bullets for each other, and who have witnessed killing sprees. It’s our kids who have spent their school lives in active shooter drills. They are rightly fed up, and are now mobilizing our country in an effort to ensure safe streets and safe schools free from gun violence. They are turning this moment into a movement for change. And their teachers are standing with them, not just in these actions, but in calling for commonsense gun safety measures…from our legislators.

Today, we organized rallies, marches, and voter-registration drives to remind our elected officials: You work for us—the people. These last few months have been about demonstrations and walking out, but come November, we’ll walk in to the voting booth to elect allies in this fight against gun violence.