Teacher activism continues: Will Texas be next?

Teachers are on strike in parts of Washington state, a threat of a strike looms for Los Angeles teachers, and backers of public education in Arizona have launched a ballot referendum against a private-school voucher law–all signals that the wave of teacher activism has not subsided after walkouts and protests in several states earlier this year. 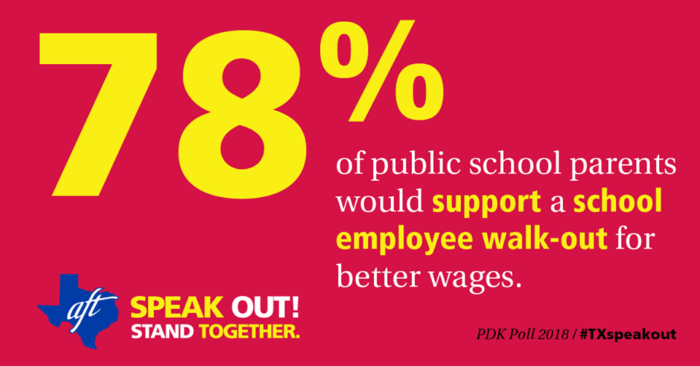 The question of how to ramp up activism here in Texas continues to bubble below the surface for many school employees who are watching the events around the country. Unlike most other states, our Legislature meets only every other year, with the next legislative session beginning in January 2019. That means that next winter and spring will be the focal point of any actions teachers might take in Texas.

Don’t fall for the headlines and comments in media stories that claim teachers in Texas are unable or unwilling to follow the lead of colleagues across the country. Mass walkouts in West Virginia, Arizona and Oklahoma were just that–mass walkouts. Everyone decided NOT to come to work on the same day and go to the capitols instead. Teachers in Texas could follow that same path, and the conditions present in those states, including declining state funding for public education, attacks on teachers pensions and health benefits, and promotion of privatization of public education, are all problems here in Texas.

Texas AFT President Louis Malfaro has repeatedly pointed out that time is running out for our state leadership to do what’s right for funding public education, and that if substantive changes are not enacted next session, Texas could see widespread action by teachers and school employees, including marching in the streets on what would have been school days.

Malfaro’s comments played prominently in a Guardian story last week entitled, “The fight continues: which states will teachers strike in next?”

“When I am out in the schools, people wanna know: what’s going to happen?” Malfaro

told the Guardian. “When are we gonna go out on strike too?”

Malfaro said the fall election is a test of how much our union and allies of public education can “mobilize public support for teachers. Support at the ballot box could equate to support on the picket line if teachers went out in the spring.”

Elected officials are growing increasingly “wary” of anything anti-teacher, and what that could mean for them in the Nov. 6 election. Malfaro noted that last month, Lt. Gov. Dan Patrick wrote a letter to the Teacher Retirement System of Texas asking its board not to raise health-care premiums on retired teachers, in spite of the fact that he led the charge to raise premiums as the presiding officer of the Texas Senate.

“In West Virginia, in Arizona, in all these other states, it was illegal [to strike], and it didn’t matter” Malfaro told the Guardian. “What matters is how much public support you can get on your side.”

Malfaro stressed that his conversation with the article’s author on the subject conveyed that any large-scale walkout would not be the union striking, but rather a mass action at the grassroots level. He also noted the importance of the November 6 election, which will decide who sits in the Texas Legislature come January.

Electing a wave of public education supporters willing to increase school funding and teacher pay will set a tone for what action is needed next. Meanwhile, our state leadership–Gov. Greg Abbott, Lt. Gov. Dan Patrick, and key conservative lawmakers–already are preparing to meet an onslaught of fed up educators by fashioning a phony agenda purporting to support teachers with higher pay. Their plan, which has been rolled out slowly in several state hearings and comments to the media, would add state money for “performance pay,” in other words additional pay for teachers whose students score well on standardized tests, with no increase in the base pay for all teachers.

Abbott, Patrick, and their devotees want to paint a picture of our Legislature prioritizing teachers and our schools, while the evidence of their leadership in the past points to just the opposite–ideologues out to privatize our public education system while letting our schools struggle with inadequate and inequitable funding.

Watch Louis Malfaro speak on teacher walkouts and the upcoming election at the Texans For Public Education forum in Canton on Saturday. 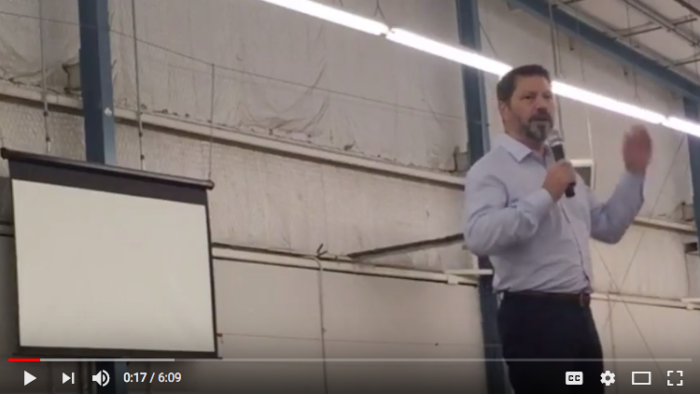