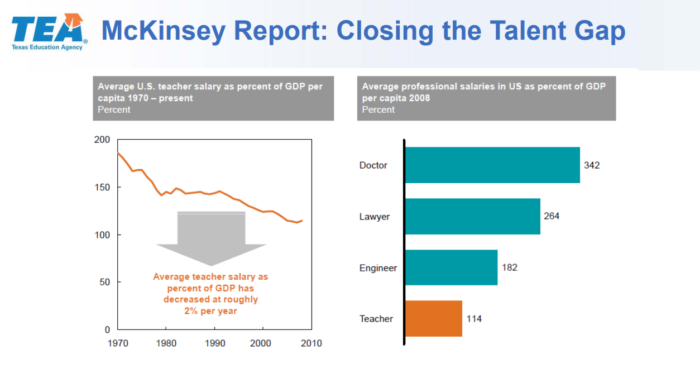 The disconnect in thinking between several House Public Education Committee members and witnesses testifying on behalf of teachers was easy to spot yesterday as the committee held a four-hour hearing on teacher compensation strategies.

Much of the initial testimony–including a presentation from Education Commissioner Mike Morath–focused on “pay for performance” measures–meaning systems that try to determine who the top teachers are and then pay them more, particularly if they are then assigned to try and shore up struggling schools. Texas AFT President Louis Malfaro and other teacher witnesses, on the other hand, stressed that what’s needed first is a state-funded pay raise for all teachers.

“It will take considerably higher base pay for teachers across the board if the state really aims to attract and keep the high-quality individuals our students require,” Malfaro said.

Morath presented a look at Dallas ISD’s Accelerating Campus Excellence (ACE) program, which devotes additional resources, including additional staff, to low performing campuses. Teachers who are rated high in the district’s evaluation system–the Teacher Excellence Initiative (TEI), which relies heavily on students’ standardized test scores–are given bonuses ranging from $8,000 to $12,000 a year to serve on these campuses. While the ACE program’s overall results for school achievement have been positive, the program has come under intense criticism, both for unfair distribution of bonuses, and for a reliance on TEI and its foundation on student test scores for evaluations. Additionally, Dallas ISD has told state officials the program is being scaled back and is unsustainable because of lack of funding.

Malfaro emphasized that a body of research shows that student test scores are not a valid means for teacher evaluations, and thus, they aren’t valid for decisions on teacher compensation. (It was also noted that a Texas AFT lawsuit against the Texas Education Agency resulted in a settlement that forbids TEA from mandating the use of student test scores for a student-growth section of the new statewide T-TESS evaluation system.)

Quite the contrary, as numerous witnesses pointed out the need for state-funded pay raises for all teachers, with additional funding for “performance pay” given in grants to districts with local control to craft programs that make sense for their schools. There were other naysayers for a statewide pay raise for all teachers, witnesses who discounted the idea as not a wise “targeted investment.” And although Huberty–who was told by his staff that he was getting too “grumpy” at the hearing–seemed intent on discussing performance incentives, we should not forget that he was the chief proponent of a $1.8 billion infusion of state money for school finance last legislative session that would have increased per-pupil funding for all schools and would have provided districts with more latitude for local pay raises. That effort was killed by Lt. Gov. Dan Patrick.

We’ll let Malfaro’s statement on the hearing sum up what Texas AFT is proposing for solutions.

Average teacher pay in Texas lags more than $6,000 below the national average and about 20 percent below pay in Texas for other jobs demanding comparable education and expertise. Over the past 15 years, teacher pay in Texas has stagnated, and adjusted for inflation, teachers’ average pay actually has declined 2.7 percent since 2010. Meanwhile, pensions have been eroded by inflation, and both active and retired teachers and support personnel are seeing their compensation further eroded by dramatically rising health-care costs. This situation is creating a financial disincentive for quality employees to enter or remain in education.

While it is fashionable to focus on altering the way teachers are compensated, in order to attract and retain high-quality educators what matters most is not how they are paid but how much. Differentiated pay is worth talking about, too, but the top priority should be to eliminate the pay gap that leaves teachers lagging behind pay in this state for jobs requiring similar levels of knowledge and skill. It will take considerably higher base pay for teachers across the board if the state really aims to attract and keep the high-quality individuals our students require.

We believe the best way to make that higher base pay feasible is to increase per-pupil state funding substantially via the basic allotment. The state should earmark a portion of increased per-pupil funds to go for a pay raise using new state dollars, and the Legislature should be sure to specify that the raise is over and above the amounts already called for by local salary schedules.

Past experience with state-directed “merit pay”—including the teacher ladder abandoned in the 1990s and the Perry performance pay that lost its funding in the 2011 budget cuts—has left a bad taste in teachers’ mouths. The experience has been similar with federal funding that flowed freely for this purpose for a time and then dried up. Teachers are accordingly wary that any new “merit pay” scheme, even if the metrics are appropriate, will not last.

That said, we believe recognition of National Board-certified teachers as “accomplished” is fully justified by educational research on what teachers who have gone through this rigorous process know and can do. These are master teachers, and extra pay for this level of accomplishment is highly appropriate.

In principle, we also support using extra pay guarantees to recruit and retain high-quality teachers with needed subject-matter expertise to work at hard-to-staff campuses. Another promising basis for differentiated pay, pioneered in districts like Austin ISD, is compensation based on meeting student learning objectives voluntarily agreed upon by individual teachers and developed by them in concert with the instructional leaders at their campus.