After an outcry erupted from thousands of active and retired teachers and other school employees over cost increases imposed on school retirees by the Legislature this spring, lawmakers in their summer special session ponied up an additional $212 million to scale back the increases. The Teacher Retirement System board was given the task of spending the money to maximize the benefit of the extra funding for retirees, and the board on September 1 formally approved a new benefit and rate structure accordingly. The new rates and benefits take effect in January 2018.

It is important to note that these improvements over what was passed in the spring simply will have the effect of “softening the blow” retirees will feel come January, as trustee Dr. Greg Gibson, superintendent of Schertz-Cibolo-Universal City ISD, said at the September 1 board meeting. Retirees still face a serious hit.

It also must be noted that what the Legislature passed this summer only provides some health-care cost relief for calendar years 2018 and 2019. Whether the relief extends beyond two years will depend on legislative action in 2019. However, TRS executive director Brian Guthrie said at Friday’s board meeting that lawmakers had publicly stated their commitment to continue the higher level of funding needed to extend the relief beyond 2019.

Here are highlights of the new rate and benefit structures, as detailed and approved September 1:

“HB 3976, passed by the 85th Legislature on May 24, 2017, requires that TRS offer a high deductible plan option to non-Medicare participants enrolled in TRS-Care. As a result of the additional funding provided by the Legislature during special session, the recommended benefit design for this population includes a $1,500 individual deductible and a $5,650 individual maximum out-of-pocket limit. Similar to the current TRS-Care 1 plan, both medical and prescription drug claim costs accumulate towards the deductible and maximum out-of-pocket limit. 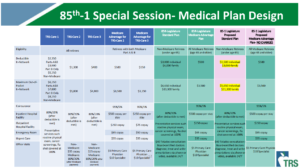 The $212 million appropriated for TRS-Care in the special session will have other notable effects besides buying down the non-Medicare deductible to $1,500 from $3,000 and lowering the out-of-pocket maximum by $1,000, to $5,650 (with corresponding reductions for retirees plus dependents). These other significant cost reductions include:

–reducing premiums for coverage of a child or children under either the Medicare plan or the non-Medicare plan by $25 a month (for example, a non-Medicare retiree and child would pay $408 monthly instead of $433).