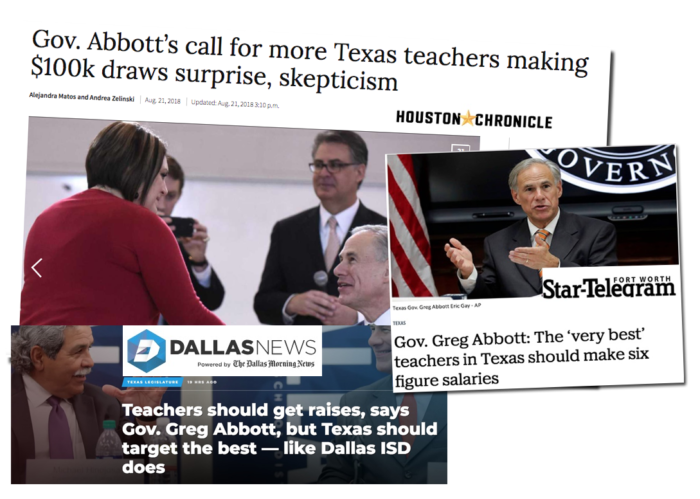 Gov. Greg Abbott got plenty of headlines for saying teachers should earn six figures, but his record reveals false promises and no new state money for public education.

Normally you’d say it’s hard to find fault in a state leader seeking input on what’s needed for public education, but in this case, it’s hard not to gag, or even worse.

Gov. Greg Abbott met with educators yesterday in New Braunfels in a private conversation–surrounded by plenty of opportunities for publicizing his efforts–to hear more on what we need for our schools, with a focus on teacher pay.

Hey, Governor! We’ve been giving you our valuable feedback for years, and you haven’t done anything to step up and find any new state money for our schools or our teachers. What gives?

It’s clear that the leadership at the helm of state government has huddled, and the resulting play from their well-worn playbook is to appear like fervent supporters of teachers and public education to look more attractive to voters heading to the polls on Nov 6. (Lt. Gov. Dan Patrick came out last week to pledge state money next legislative session to prevent any more cuts to retiree health care, but he didn’t do anything to stop the cuts in the first place.) It’s also clear that the long-term game plan for the conservative block of state leaders is to sow the seeds of a performance-pay plan instead of doing anything meaningful to raise the pay for all school employees.

First, there was the Texas House Public Education Committee meeting on August 10 that allowed Education Commissioner Mike Morath to argue why we only need to invest in the best teachers, and that the best teachers can be defined by their students’ standardized test scores. Now we have the governor touring Texas to tout his love for public education with grandiose statements like he offered to the New Braunfels teachers: “We want to structure the compensation plan that would be the very best educators on the pathway to earning a six-figure salary. That will reward good educators but, in addition to it, it will attract other people into the profession who will create a legacy of good educators.”

The governor and lieutenant governor both have a track record of proposing pie-in-the-sky raises and bonuses. Remember last year when Patrick rolled out a pay/bonus system to try and give teachers a pay raise of up to $6,000, without any state money to pay for it? Or you may recall he completely lied during the primary election campaign claiming he had pushed for a $10,000 teacher pay raise–something that never happened. Abbott told lawmakers before the special session in 2017 that a teacher raise should be a priority. Then he retreated back to the governor’s mansion without pressing the issue or giving any direction on how to pay for an increase.

While art teachers around the state are scratching their heads wondering how student test scores in math and reading would define their performance and additional pay, we’ll be crafting our own playbook, one based on the truth. And the truth is that we need to substantially increase pay for all school employees, while at the same time increasing state assistance for health-care premiums. The $75-per-employee state contribution to health-insurance premiums hasn’t had an increase since 2002. Without addressing rising health-care premiums, raises simply will be eroded to nothing.

And as for performance pay, we’ll repeat what we said–via our Texas AFT President Louis Malfaro’s testimony–at the House Public Education Committee meeting:

“While it is fashionable to focus on altering the way teachers are compensated, in order to attract and retain high-quality educators what matters most is not how they are paid but how much. Differentiated pay is worth talking about, too, but the top priority should be to eliminate the pay gap that leaves teachers lagging behind pay in this state for jobs requiring similar levels of knowledge and skill. It will take considerably higher base pay for teachers across the board if the state really aims to attract and keep the high-quality individuals our students require.”

Additionally, as everyone chiming in on Facebook has noted, STAAR results are not a valid means to evaluate teachers for compensation. We’re willing to support additional pay for high-performing teachers, particularly those that commit to teaching at struggling campuses. But that performance and pay structure needs to be determined at the local level, designed an supported by the teachers affected.

As our former Texas AFT president, John Cole, often said, “Performance pay is icing on a cake not yet baked.”