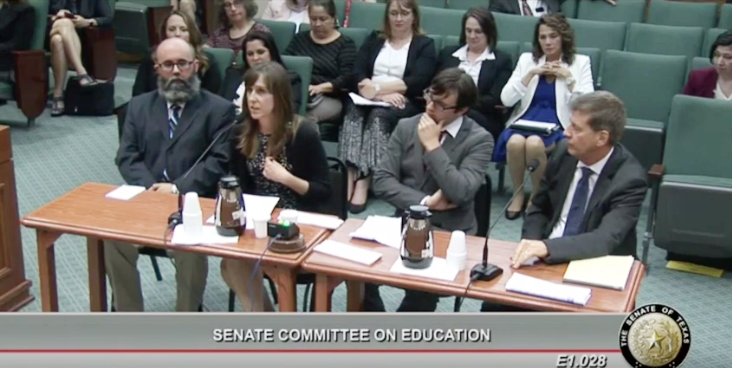 First the good news. The Texas House passed its version of the TRS funding fix as SB 12 on Thursday. The bill would ensure the pension fund is actuarially sound by raising the state’s contribution as well as provide a 13th check to retirees. We expect a conference committee to be appointed to work out the differences between the House and Senate versions. Texas AFT supports the House plan, as the Senate required both underpaid active members and cash-strapped districts to pay more. The Senate’s proposal caps the 13th check at $500, while the House limit is $2,400.

While there are other points of light this session (see Texas AFT bills on the move below), there are also significant trouble spots. The newest version of the Senate’s school finance plan is, at best, a mixed bag. While it includes an increase in the basic allotment, a $5,000 raise for teachers and librarians, and funding for pre-kindergarten, it also includes numerous areas of concern, including a teacher-merit pay provision that would base teacher pay on test scores and student surveys. The plan is based largely on the Dallas ISD model, which has been panned by classroom teachers. Three Alliance AFT teachers from the district–Andrew Kirk, David Lee, and Kristen DeRocha–provided powerful testimony to senators hearing the bill about how the system is unfair to kids and teachers alike. Check out how Texas AFT changed the tone of the hearing with their stories.

Texas AFT continues to plow through the 289-page omnibus legislation from the Senate, but we have concerns about the expanded amount of authority given to the commissioner of education; funding for school districts based on test scores; and potentially devastating caps to school district property tax revenue at 2.5%. Numerous unanswered questions remain, especially as runs showing how districts fare under the proposal have not been released. The Senate Education Committee has indicated a willingness to work with stakeholders, so Texas AFT will continue to work with Senators, with more action expected late next week.

Meanwhile, SB 2, a Senate bill that would cap school districts’ ability to raise revenue, was amended in the House to lower the cap to school districts to 2%. The move appeared symbolic, as the committee chair indicated that tax reform for schools needed to happen in the education code through school finance reform. However, this game of property tax “reform” chicken could have devastating consequences for local school districts if revenues are capped. It’s not clear where the plan goes from here, but the House is scheduled to hear the House tax plan on April 30.

And meeting just down the street from the Capitol, the Teacher Retirement System of Texas Board of Trustees was feeling the impact of another biennium of neglect to the TRS ActiveCare health insurance program. Meeting Thursday and Friday, the TRS Board announced that there would be a rise in premium costs and various costs to coverage for every member of TRS ActiveCare. The majority of members will see their premiums rise 3% under the HD1 and Select plans; meanwhile those remaining in the AC2 program–which TRS is phasing out–will see their premiums rise 8.9%. (See here for a breakdown of increases and changes.) Several times during the presentation, Board members and TRS employees reiterated that the Legislature has not increased its health-care funding since 2002. Until it does, it is difficult to foresee a year without a rise in premiums or cuts to services.

Meanwhile in the Senate

Honorable Mention: While not a Texas AFT priority bill, SB 722 by Sen. Donna Campbell would prohibit a school board from making a severance payment to a superintendent of more than one year’s salary under the superintendent’s terminated contract. The bill has been amended to include charter schools.

Great Bills of the Week

These bills are not companions, but are very similar. Both are still pending in the education committees of both chambers. Either bill would allow otherwise ineligible three- and four-year old children of educators, employed by a school district in the state, to qualify for free prekindergarten. Children would also remain eligible even if the parent is no longer employed by the district. We thank the authors of both of these bills for recognizing that educators who are parents deserve this benefit that helps both parents and kids.