Your weekly briefing: Take Action on a pay raise for all; news on the top bills at the Capitol 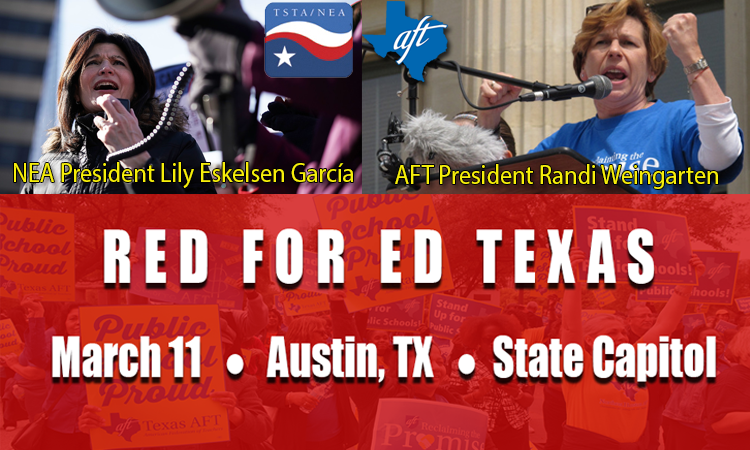 Your Weekly Briefing
With less than three months to go of the 86th Legislative Session, there still is no clarity as to whether education employees will get raises, more money will be available for public schools, or harmful tax caps will be passed. There is still time to make sure this Legislative Session is about 5.4 million public school children. Join us on March 11 for a rally to demand the Texas Legislature invest in our public schools.

The Week Ahead
The timing couldn’t be better for our rally, as we expect the Texas Senate to vote on a teacher-only $5,000 pay raise early in the week, after the Senate Finance Committee unanimously approved SB 3 on Monday.

While Texas AFT supports more money for teachers, we demand a sustainable raise for all school employees. Education Austin member Traci Dunlap said it best in her testimony at Monday’s hearing:

While it’s true that classroom teachers are struggling, so are the other members of the team who work toward the success of our students. From the bus drivers who get children safely to school, to the cafeteria workers who make sure children are fed, to the teaching assistants who often work with our most challenging students, to the custodians who keep our schools clean and maintained, we all contribute to the safety, health, academic growth, and social-emotional well-being of the children of Texas.  I’m asking that all members of the education team be added to this bill. We all need a raise.

Click here to tell your Senator that every member of the public education team needs a permanent raise. Now.

While we expect SB 3 to sail through the Senate, its future remains uncertain in the House, whose members say they are more interested a holistic look at school finance funding. In that vein, Texas House Public Education Chair Dan Huberty said he will unveil his school finance plan on Tuesday, with a hearing the following week. We’re excited about the possibility of new money, but concerned about the continued talk about outcomes funding and merit pay. We’ll have all the details in next week’s edition.

Friday, March 8 is the bill filing deadline, so we expect a deluge of bills as the date approaches.

Texas AFT is excited to support SB 426 by Eddie Lucio Jr. and HB 727 by Mary Gonzalez.Professional school counselors are a critical part of the public education team. However, we have heard too many examples of counselors being required to administer standardized tests, taking time away from the critical services we need them to provide. These bills would require school boards to adopt a policy mandating a school counselor to spend at least 80 percent of the counselor’s “total work time” on duties that are components of a counseling program.

We’ll be back with another Weekly Briefing next Friday!