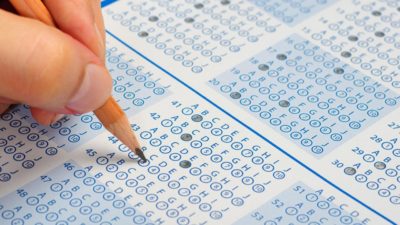 As a week of standardized state testing begins for Texas students, the stakes are higher than ever and controversy over the use and abuse of testing is intensifying. This year, under legislation passed in 2015, the state not only could compel closure of campuses given low performance ratings based on test results for multiple years—it also could take over the management of entire school districts based on the persistently low test-driven ratings of even just one of their schools. Under threat of school closures or state takeover, districts are under pressure to contract out the control of struggling schools to charter operators—thereby qualifying for a two-year reprieve from accountability sanctions, thanks to another state law enacted in 2017.

Meanwhile, the high-stakes testing regime faces challenges on multiple fronts. For a thousand or more campuses battered by Hurricane Harvey last year, the resulting educational disruption is ongoing—just last month Gov. Greg Abbott declared that the hurricane-affected counties remain an official disaster area. The Texas Education Agency, however, has yet to confirm that affected districts and campuses will receive any exemption from accountability sanctions based on this year’s test results, as occurred a decade ago after Hurricane Ike.

The testing regime also faces a legal challenge from parents who contend the state has not complied with its own requirements calling for shorter test administration in third through eighth grade. Their lawsuit, filed in 2016, just gained new momentum from a favorable ruling by a state court of appeals. The state’s implementation this fall of a new A-to-F system of simplistic accountability grades for school districts also is sure to fuel increased discontent heading into the next legislative session, which starts in January.