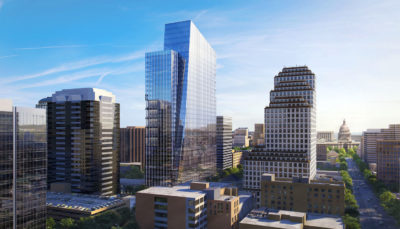 The Texas Teacher Retirement System Board Thursday backtracked on its plans to house employees in a new downtown Austin office building after outcries from pension system members about the costs of the move.

The Board unanimously passed a resolution allowing a renegotiation of the lease terms at the 816 Congress building where the TRS investment division is currently located, instead of moving the division into space in the planned Indeed Tower in 2021. TRS signed a lease for the unfinished Indeed Tower last spring, which drew controversy over its seemingly-high lease rate of $326,000 a month for 180 employees and more staff there in the future.

As the TRS system grows, so does its number of employees, and the system is maxed out in its headquarters space, also in downtown Austin at 12th and Rio Grande streets. It was initially reported by TRS that its space at 816 Congress also was full, and new space was needed for the investment division, prompting the lease at Indeed Tower.

However, today the TRS Board favored staying at 816 and renovating the space. According to Executive Director Brian Guthrie this option was not available at the time they were making their decision on the Indeed Tower lease two years ago. Guthrie went on to explain that they were recently made aware that new space would be opening at the 816 location in the next year. This information made staying in place a more viable option.

After objections rose to the Indeed Tower lease, TRS noted that the system has been in long-range planning for facilities for years, with a recent goal to sell the current headquarters and build a new facility that might house all employees.

Here’s what you should know about the option to stay at 816 Congress:

The 816 Congress lease would be extended for seven years with an option to expand into the new space as needed. The total space being leased is 95,269 square feet compared to 101,673 square feet at the Indeed Tower. Rent for the upgraded space would be $296,000 per month compared to $326,000 at the Indeed Tower. TRS is still liable for the Indeed lease and will need to find one or more tenants to sublease the three floors at the Tower. Provided they are able to sublease the Indeed space, TRS projects a savings of $9.1 million over the 7 years. There are some unknowns in terms of operational expenses and cost of building out the space at 816 Congress, but expenses are estimated to be lower than if they moved to a new building.