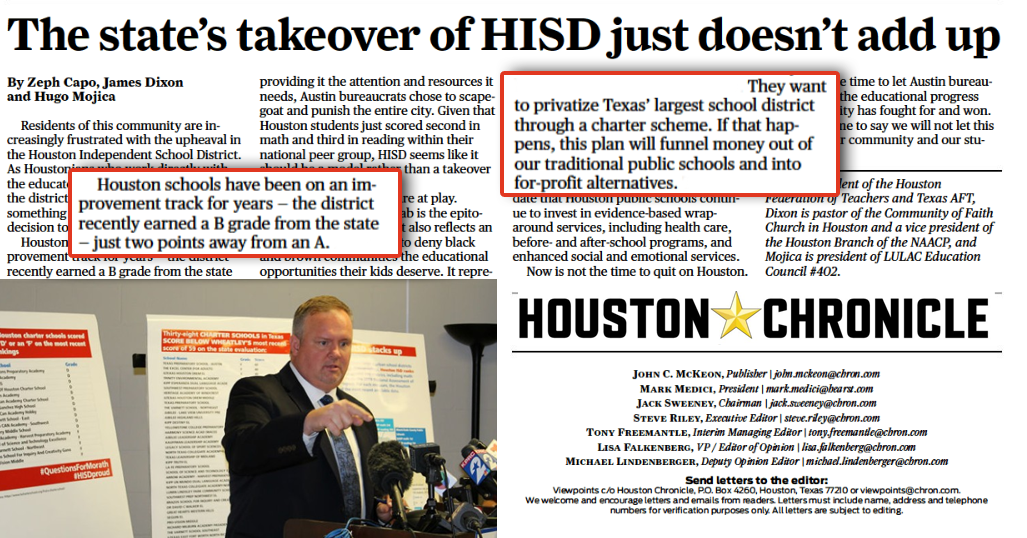 Local, state, and national unions are ready to fight state on an unfair and undemocratic power grab. Could your district be next?

After the Texas Education Agency last week took over the Houston ISD district, with intent to replace the School Board with a Board of Managers and a state-selected superintendent, Texas AFT and its affiliates are joining together to fight the unfair and undemocratic move.

Zeph Capo, president of Texas AFT and the Houston Federation of Teachers, joined AFT President Randi Weingarten Monday for a news conference demanding answers from TEA about the real intent of the takeover. “Houston, we have your back,” Weingarten said in a show of support to put the resources of the national union behind the fight.

“Gov. Greg Abbott and Education Commissioner Mike Morath aren’t actually looking out for Houston’s kids,” Capo said. “They want to privatize Texas’ largest school district through a charter scheme. If that happens, this plan will funnel money out of our traditional public schools and into for-profit alternatives.”

We’ll be announcing some important steps in that fight in the coming days, but here are some key points to get a better understanding of what’s happening in Houston ISD.

A flawed law
TEA’s takeover is based on a state law passed in 2015, which requires the state to either close a campus or appoint a board of managers for the entire district if a single campus receives an unacceptable rating (based primarily on standardized tests) for five years. Wheatley High School was the only campus to fall into that designation, out of 280 Houston schools. 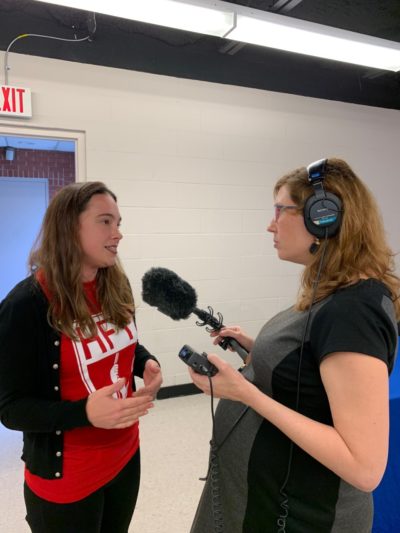 Punishing a high-performing district
The district overall outperformed many peer districts and scored above the state average with a high B, an 88, in accountability ratings.

“Forced failure” for one school
Several Houston charter schools scored lower than Wheatley High School, but continue operating and are not being singled out in the takeover. Wheatley—a school comprised mainly of low-income, African American and Hispanic students—was able to overcome a rigged accountability system based primarily on standardized tests and still passed standards with a 63.

Wheatley High School would not have been taken over were it not for a “forced failure” rule Education Commissioner Mike Morath enacted in 2018. The rule–not part of the 2015 law, but instead developed by Morath–allows TEA to downgrade the rating of a school that does not pass three of four accountability measures, even if the school would have passed otherwise by stipulations in the law. Thus, Wheatley High School’s passing grade of D was curved down to an F, putting it past the five-year limit set in 2015 and setting up a false choice for either campus closure or district takeover.

Targeted for refusing to privatize
Houston ISD’s democratically-elected School Board had many of the same challenges other urban districts faced throughout the state. However, it faced unusual scrutiny from the TEA because it refused to privatize many of its schools. A separate law passed in 2017 allows districts a two-year reprieve from sanctions for low-performing schools if they “partner” (read: allow a takeover) with a charter operator or nonprofit.

A proposal from the district to turn over several schools to an inadequate charter operator was rejected by the community and ultimately the board.

Let democracy work
Although the TEA also criticized the School Board for its performance, the November election resulted in four incumbents being replaced for the four seats open. Democracy works, and the state should not be depriving citizens the right to local democratic control.