A first look at yesterday’s election: Public education is a winner 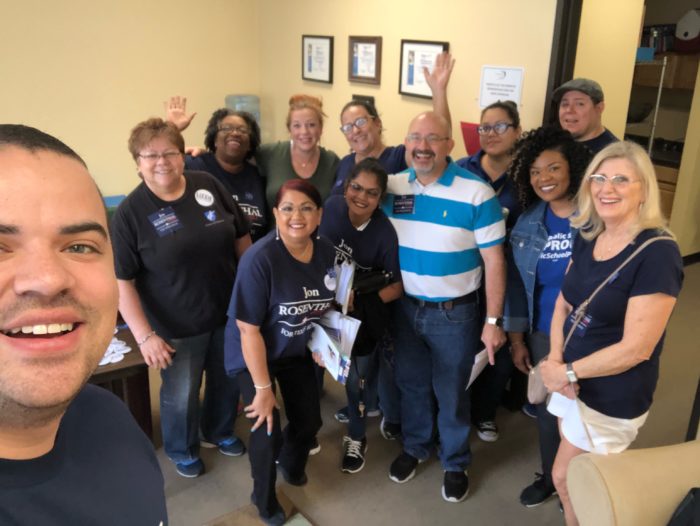 Texas AFT members and staff from the Cy-Fair and Aldine areas of Houston work on the campaign for Jon Rosenthal, who was victorious Tuesday in his bid for Texas House District 135.

While Texas overall set a record for turnout in a midterm election, we’re more hopeful than ever that we can set Texas on the right path for our students after seeing educators more energized and engaged in voting and election work than ever before.

We were picked up 12 new state House seats, didn’t lose any favorable incumbents, won two additional state Senate seats, flipped two congressional seats, and sent the first two Latina members of Congress to represent Texas into office with wide margins of victory. ​Tomorrow’s Hotline will have more specifics on our victories, but you can see a tally of most races here.​

“Public education is a winner in this election, since we’ve made enormous strides in electing candidates who are ready to invest in our schools,” said Texas AFT President Louis Malfaro.

While the big news was a new wave of friends of public education in the Texas House, close statewide races also sent a signal to the state leadership that the status quo of underfunding schools and promoting the privatization of public education won’t stand. Even more clear was that educators stepped up to support these candidates that pledged to support them and their students in schools.

“Not only could you see it–with scores of our members out knocking on doors and making phone calls for candidates–but you also could feel that something was different about this election,” said Louis Malfaro, Texas AFT president. “We had teachers, bus drivers, and all school employee realizing that something had to be done to change the players in state and national offices so that we can pursue an agenda of funding and supporting our schools instead of tearing them down. The most amazing part of this election was seeing the connection our members were making with candidates–whether they were Republicans or Democrats–to let them know they wanted to be part of the team and would continue to engage with these leaders when we go into the next legislative session in January.”

While frustration over low pay and growing health-insurance costs was a catalyst for many educators to stand up and say “enough is enough” and work for change, the biggest issue on the minds of teachers was school funding overall. Educators saw past false claims of adequate funding from the state leadership and understood that Texas ranks near the bottom in public education funding–that the state needs to step up and add a significant investment in our students.

“We had a sensible, bipartisan proposal for a significant funding increase for schools that was overwhelmingly backed by state House last session,” Malfaro said. “And what derailed it? It was a self-serving agenda by the leadership in the governor’s mansion and the state Senate that promoted using taxpayer money for private schools, while also wasting en enormous amount of time and energy on a divisive bathroom bill.”

While the top two state leaders (Gov. Greg Abbott and Lt. Gov. Dan Patrick) won, teachers have made it clear that they won’t stand for being ignored any longer and are prepared to march on the Capitol. (Texas AFT has a march and rally planned for the Capitol on March 11.)​

“Already we see the governor forming plans for tax cuts that will strip money away from our schools,” Malfaro said. “Our message is clear: Texas has a robust economy and low taxes already. But our state also is riddled with loopholes and outdated tax structures that allow corporations to avoid paying their fair share, which means that state doesn’t pay its fair share, and local property taxpayers end up footing the bill. We’re going to come to the table with specific ideas for raising new revenue to invest in public education, and we’re not going to be fooled by more empty promises and ‘alternative facts’ from the top lawmakers in Austin.