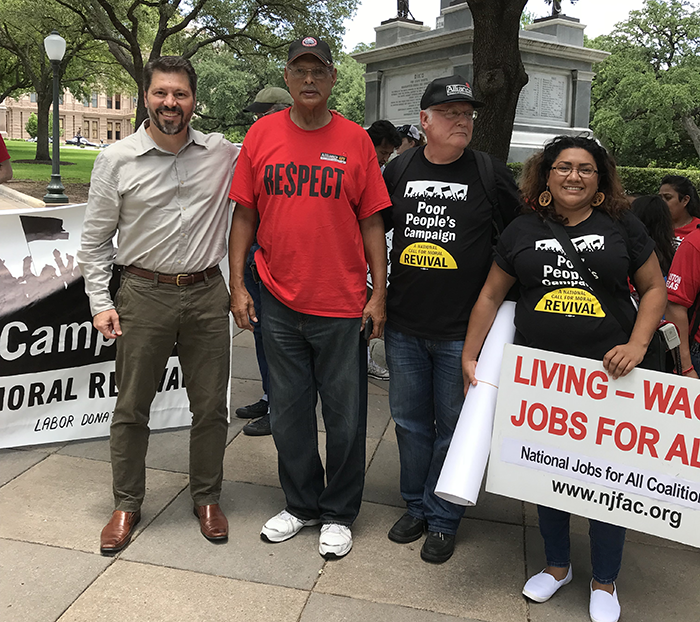 AFT has pledged to support a movement–the Poor People’s Campaign–to demand investment and equity in education, protection of the right to vote, and affordable high-quality healthcare and housing. The Poor People’s Campaign originated in 1968 with Martin Luther King Jr. and his call to end poverty. The recent “revival” of the movement was inspired by the Rev. William Barber II, the founder of the Moral Mondays movement, which began in 2013 with faith leaders and other activists protesting draconian cuts to health, human services, and education in North Carolina.  For the past five weeks, union members have joined faith leaders, community organizers, civil rights groups, parents, and students to take action at state capitols​ across the country each Monday with rallies and in some cases, arrests for civil disobedience, to highlight the cause.

AFT President Randi Weingarten recently wrote that it is a “moral imperative” to end poverty and called on all AFT members to support the campaign. “Lack of investment in public education, including low wages, are at the core of the teacher walkouts that have rippled across America,” Weingarten wrote. “The inequity between the haves and have-nots hurts kids every day….AFT members address the plight of poverty every day in their work in hospitals and schools, and we are proud to be a coalition partner in the new Poor People’s Campaign.”

On Monday in Austin, Texas AFT President Louis Malfaro joined protestors at the state Capitol in Austin for a rally with the theme, “Everybody’s Got a Right to Live: Education, Living Wage Jobs, Income, Housing,” which included a special focus on the Service Employees International Union’s “Fight for 15,” calling for a living wage of at least $15/hour for all workers. AFT Secretary-Treasurer Mary Cathryn Ricker also joined a protest Monday at the Minnesota state capitol with the rallying cry of ““Raise the floor, lift the poor, raise the wage!”

Malfaro noted that poverty has a particularly harmful impact on schoolchildren’s ability to learn and achieve. “There’s an illusion that Texas is a prosperous state, but that prosperity doesn’t extend to the majority of Texans,” he said. “When you take a look at the statistics for Texas, or when you work in the classrooms every day and see students and families struggling to get by, then the impacts of poverty really hit home.” While the official poverty rate for Texas is 16 percent, that figure grows to about 47 percent of Texans when you add in the classification of “low-income.” And some 58 percent of all students in our Texas schools, according to the Texas Education Agency, meet some standard of “economically disadvantaged.”

“Kids from low-income families often suffer from lack of health-insurance, or persistent hunger, or mobility issues from constantly having to move in a search for affordable housing,” Malfaro said. “It’s time that the leadership in Texas stop hiding behind the illusion of prosperity in Texas and stand up to provide the resources we need to educate our children and provide a structure for a living wage for their families.”