Fighting back against voter suppression 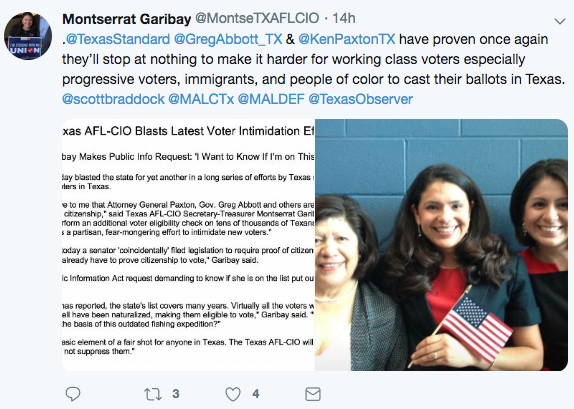 ​If ever there were a case for reading beyond a headline, this week’s news on supposed illegal voters is a perfect example.

The Texas Secretary of State Friday announced that 95,000 names on Texas voter rolls were suspected to belong to residents who may not be citizens, with 58,000 of these names records showing have voted in the past 22 years (after a review of drivers license records from the Department of Public Safety). The Secretary of State sent county election administrators lists with the idea that the counties could attempt to purge any erroneous or illegal entries–although these voters have to be informed by mail of a demand to prove citizenship first.

While the headlines surrounding sent many into a tizzy–mainly proponents of the erroneous theory that there is widespread illegal voting–reporters were quick to point out the obvious: 1) State data traditionally has been extremely flawed; and 2) That since some 60,000 Texans become naturalized citizens each year, it makes sense that many folks who may not have supplied citizenship information when getting a drivers license have since become citizens and registered to vote.

The real motivation behind the the Secretary of State’s move to make a big splash in the media was to set the foundation for both trying to unfairly purge voters at the county level, and also to bolster continued efforts by some lawmakers to make it more difficult to vote–voter suppression.

Leading the charge this week against this move is Montserrat Garibay, Texas AFL-CIO secretary-treasurer and a former teacher and vice president of our affiliate, Education Austin. Garibay, a naturalized citizen herself, said: “It is personally offensive to me that Attorney General Paxton, Gov. Greg Abbott and others are trying to cast a shadow on my patriotism and my citizenship. Directing counties to perform an additional voter eligibility check on tens of thousands of Texans without any plausible evidence of voter fraud is a partisan, fear-mongering effort to intimidate new voters.”

“In fact, lo and behold, today a senator ‘coincidentally’ filed legislation to require proof of citizenship ahead of voter registration when voters already have to prove citizenship to vote,” Garibay said.

Garibay prepared a Public Information Act request demanding to know if she is on the list put out by the Secretary of State.

“As the Texas Tribune has reported, the state’s list covers many years. Virtually all the voters whose status is being newly questioned may well have been naturalized, making them eligible to vote,” Garibay said. “Why should I have to re-prove my citizenship on the basis of this outdated fishing expedition?”