Reduction in assumed TRS investment returns: What does it mean for you?

The Teacher Retirement System of Texas Board of Trustees today reduced the pension fund’s long-range assumption for investment returns from 8 percent to 7.25 percent, a reduction that will have a significant impact on how much must be contributed annually to meet future obligations and when or whether retirees will get a cost-of-living increase in their pensions.

While board members and retirees in attendance at the meeting listened to a wave of numbers, projections, and financial terms in the debate, the dominant theme that emerged in board member discussions was the need for the Texas Legislature to increase state contributions to the fund in order to meet the state’s obligation to educators.

Texas AFT members were in attendance and Cheryl Anderson, chair of the Texas 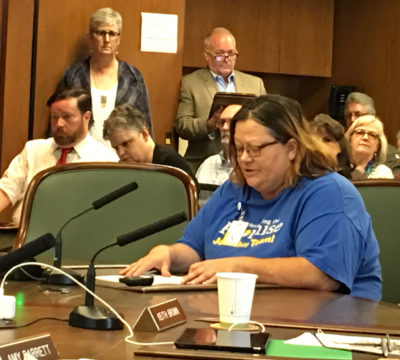 AFT Retiree Committee, testified to the board with the same message she delivered on the steps of the TRS Building yesterday at a news conference: TRS Board members need to communicate vigorously to legislators regarding the need for the state to step up its contributions to the pension fund to provide benefit increases for retirees, who receive no annual cost of living adjustment (COLA) unless authorized by the Legislature. Also reinforcing that message in testimony was Ted Raab, a member of Texas AFT’s government relations team.

Regardless of the number approved today, our message remains the same: The Texas Legislature needs to fix the problem it created with years of underfunding TRS by significantly increasing its contribution to the fund so that active school employees and current retirees can realize the promise of a dignified living in retirement.

Under law, no cost-of-living increase can be given retirees unless the funding period for fulfilling liabilities is less than 31 years. Since any increase in benefits would increase liabilities, for all practical purposes that funding period would need to be about 27 years.  According to TRS figures, just to get to the 31-year range with the new assumed investment returns, it would take an increase in contributions (either state, employee or both) of 1.82 percent–about $786 million. This is the minimum amount the Texas Legislature should be budgeting in increased TRS state contributions in order to meet the funding obligations and ensure that the state meets its obligation to school employees.

“Texas teachers and public school employees work hard to educate the children of our state and we deserve to retire with dignity,” said Texas AFT President Louis Malfaro. “Most retired school employee receive a modest pension–about $2,000 a month on average for teachers–that we have earned and paid for through years of monthly contributions to TRS. Ninety-five percent of us do not participate in Social Security (a huge savings to Texas taxpayers) and TRS is the only lifetime annuity benefit we receive. TRS provides no cost of living adjustments unless authorized by the Legislature. The last cost-of-living increase for retirees was a 3 percent bump (capped at $100 maximum per month) in 2013, for those retiring before August 31, 2004, and those retirees hadn’t seen an increase since 2001! Among the states that do not provide Social Security benefits to school employees, Texas has the lowest state contribution rate–less than one half of the next lowest state!  It’s time for the Texas Legislature to do right by teachers and school employees and fully fund TRS!”

Complicating the issue at the Legislature will be the ongoing need to fund TRS retiree health care, which was subject to significant benefit cuts last year, and that could cost anywhere from $300 to $600 million just to keep the current level of benefits. There is also the need to better fund active school employee health care, which has eaten up any modest salary increases in recent years.  Now is the time to demand that the state Legislature take action to fulfill the promise made to dedicated school employees. Texas AFT will be with you all the way, promoting candidates who support educators in the November 6 election, and then again in January, when the next legislative session begins.