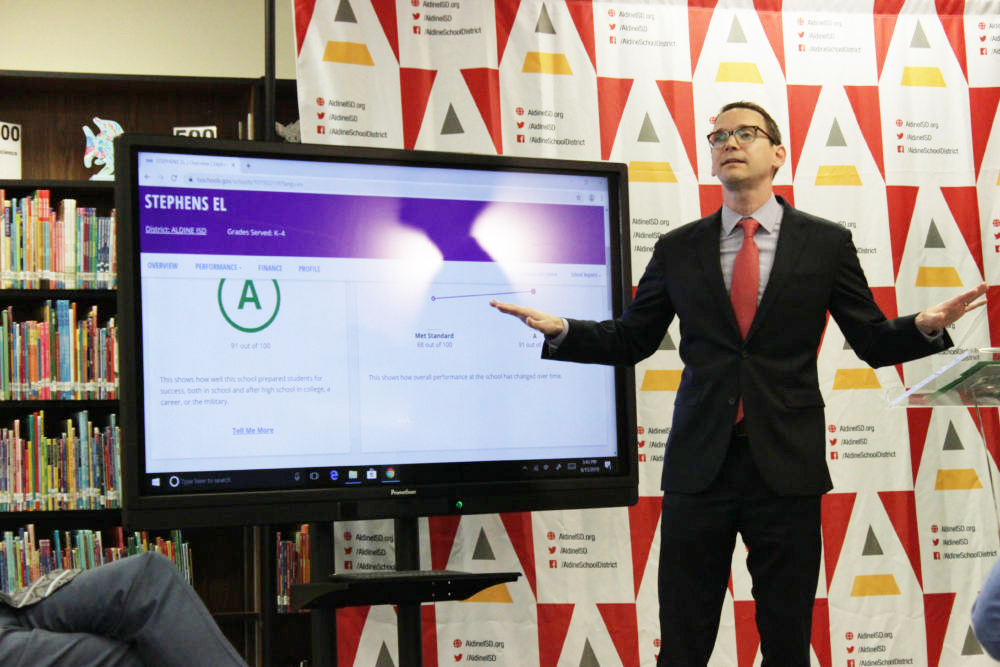 Yesterday, with much undue fanfare, the Texas Education Agency released its A-F accountability ratings, which for the first time officially include campuses as well as districts. Education Commissioner Mike Morath and Lt. Gov. Dan Patrick went on a tour of three districts in the state–San Antonio, Irving, and Aldine ISDs–to laud teachers and officials for their hard work. (You can look up individual campus scores here.)

Hard work, however, is not the issue here. We already know that our school employees work tirelessly to educate our kids regardless of state-created efforts to test and punish our schools and teachers with a single letter grade. We’ll let our Texas AFT President Zeph Capo sum up the injustice of the A-F system here with his statement to the media yesterday:

While the A-F system doesn’t paint an accurate picture of how well a campus is educating our kids, nevertheless, our teachers and students are challenged with meeting the expectations of the rules–no matter how flawed they are. So we’re pleased that teachers and students have stepped up to improve overall ratings for districts and campuses across the state, but unfortunately, A-F ratings also are pushing absurd rules that threaten to close some neighborhood schools or have the state take over democratically-elected school boards.

The law creating these harsh sanctions was bad enough, since we’re dealing with an accountability system largely based on the improper use of the STAAR test. Adding to the insanity are rules from the Texas Education Agency that went beyond the intent of the law and created forced failures for many more campuses. Another rule currently proposed by TEA would triple the number of unacceptable campuses. Even more perverse is that Education Commissioner Mike Morath is dangling what he calls “partnerships”–often just takeovers of neighborhood schools–with charter-school operators taking over districts as a way to get a reprieve from these sanctions and additional funding.

We need to hit the reset button on sanctions and bring some sanity back into how we evaluate our schools and students.

Capo also addressed the situation in Houston ISD, which overall had a high “B” in ratings and accomplished other notable improvements, yet is facing a state takeover for the performance of one campus.

Every elected official who voted for HB 1842—which set mandated sanctions of school closures or state takeover of school boards—should be held accountable for any takeover in Houston ISD based on the failure rating of one school out of 280 campuses. These officials should be stepping up now to stand with us in correcting this mistake. The draconian legislation in HB 1842 is especially egregious in this situation, because the one school that would trigger state takeover would not actually be rated an “F” were it not for the “forced failure” rule set by TEA.

We believe that rule—which went beyond the intent of legislation to set up more schools for failure—is an overreach and could be the basis for a legal challenge to any decision to remove the elected Houston ISD Board.

Our members will continue to fight for local control of our schools, because now is the time for greater community voice in our government, not less. It is no surprise to us that the oligarchs will fight desperately for unelected and unaccountable governance, and we fear their agenda will be focused on the unbridled privatization of our public schools. Teachers and parents know best what works for their neighborhood schools.  Democracy is the core foundation for public education, and we believe it is worth fighting for.