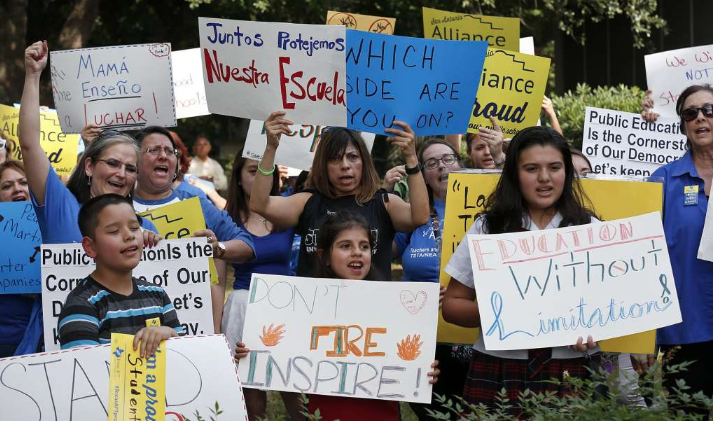 Some Texas school districts, faced with flat-lined state funding and increasing costs, are announcing teacher layoffs or reductions in force (RIFs). State law and local school district polices are supposed to protect teachers and staff from arbitrary and unfair processes for determining who will lose their jobs. In San Antonio ISD, it appears that the district is using a faulty and malicious process to lay off teachers, one that violates state rules and smacks of favoritism.

San Antonio ISD announced layoffs of 132 teachers Monday after handing off one of its schools to an out-of-state charter operator, thereby eliminating nearly 50 teaching positions. At Monday evening’s School Board meeting, our local affiliate, the San Antonio Alliance of Teachers and Support Personnel, protested the layoffs–which are supposed to be based on teacher performance. Alliance President Shelley Potter revealed to the board an alarming tactic she said the district used in deciding whom to terminate. Potter received at least two written statements from district officials that outlined how administrators were ordered to create “red lists” of teachers they wanted to get rid of. Administrators were then instructed to give numerous bad evaluations to these teachers to provide documentation for their termination.

“When we got news about the Reduction in Force (RIF), things started getting more complicated. We were asked to come up with names to be either ‘grow or go,'” wrote one administrator. “We met with the attorney for the district…to discuss this ‘red list.’ From that day onward, we were asked not to provide positive feedback to those teachers. We were asked to produce at least 8 write ups per every teacher on continuing contract, 6 for term contracts, and 3 for probationary. In several instances, there were some observations that were not logged in because they were positive.” (Read another assistant principal’s statement here.)

San Antonio ISD Superintendent Pedro Martinez has denied the allegations, but Potter has called for an investigation into the matter. The revelation that teachers may have been unfairly targeted led to a contentious meeting of the board Monday, with board members getting a police escort through the back door to avoid the shouting crowds as hundreds of parents and teachers protested.

In Houston ISD, our local there–the Houston of Federation of Teachers (HFT)–is working with the district to establish a fair process for the 230 teachers and staff who have received layoff notices. HFT President Zeph Capo called the district’s situation a “perfect storm,” given the massive expenses and many school closures due to Hurricane Harvey, the threat of HISD having- for the first time- to pay recapture of local tax dollars to the state, and 10 schools faced with closure due to the state’s punitive and misguided accountability system.

Headlines out of Houston and San Antonio about reductions in force fly in the face of a statewide shortage of teachers here in Texas, as our state adds about 80,000 students every year. Full staffing of Texas schools has never rebounded since the Legislature made severe cuts to public education in 2011, and overall staffing remains below pre-recession levels.

A report released in April from the Center for Public Policy priorities–”Staffing Levels in Schools: What the Numbers Do (and Don’t) Tell Us”–notes:

Statewide our schools lost 10,700 teachers between the 2010-11 and 2011-12 school years due to the $5.3 billion cut lawmakers made to public education. In the midst of the budget cuts and teacher shortage, student enrollment increased by 44,500 between 2011 and 2012. Unsurprisingly, the statewide student-teacher ratio also went up in 2012. While teaching staff has grown by nine percent since its low point in 2012, schools would need to hire 11,000 more teachers today to meet the same student-teacher ratios seen during the 2010-11 school year due to the growing student population. 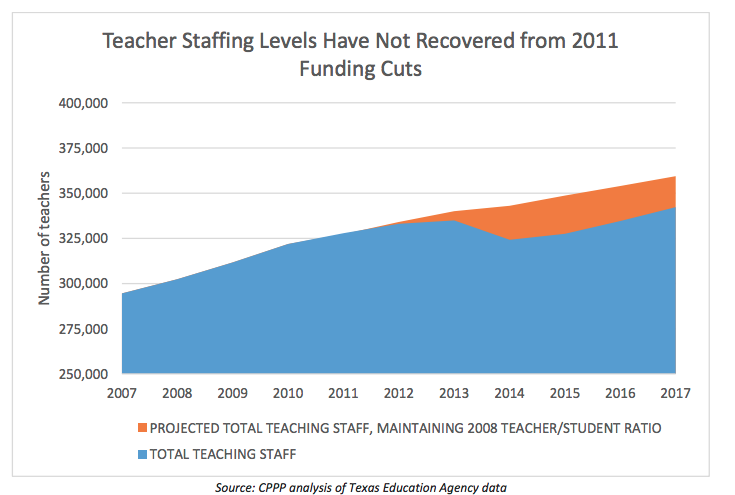 The report also analyzes some of the consequences of a shortage of teachers needed–e.g., larger class sizes–and trends in administrative and support staffing. Years of falling and flat funding have left school district across the state struggling to meet the needs of students and provide decent wages and benefits to employees. Texas is in the throes of a school funding crisis and the only long-term solution is for the state to step in and fulfill its constitutional responsibility to our kids.