On January 23 the new Texas Commission on Public School Finance convened for its first meeting en route to a December 31 deadline for submitting its recommendations to the 2019 session of the Texas Legislature. The 13-member commission is what the Legislature gave us instead of actually passing the proposal from the Texas House for a substantial increase in school funding. The Senate blocked that, but the two chambers did agree to create this commission. The governor, lieutenant governor, and speaker of the House each appointed four members, and the State Board of Education named one.

The Legislature gave the commission a broad mandate to consider reforms of school finance but also asked for specific recommendations on three issues as stated on the commission’s website (https://tea.texas.gov/schoolfinancecommission/​) :

1. the purpose of the public school finance system and the relationship between state and local funding in that system;

2. the appropriate levels of local maintenance and operations and interest and sinking fund tax effort necessary to implement a public school finance system that complies with the requirements under the Texas Constitution; and

3. policy changes to the public school finance system necessary to adjust for student demographics and the geographic diversity in the state.

The first meeting of the 13 featured presentations on the legal landscape of school finance, data on educational outcomes and population trends, and the staking out of some familiar positions. Former Justice Enoch, who was the lawyer for public school critics promoting privatization in the last big school-finance case, contended that public schools with more money per pupil don’t necessarily perform better. Commissioner of Education Mike Morath asserted that the state’s highly controversial standardized tests are in his estimation a valid and reliable predictor of college readiness. Commissioner of Higher Education Raymund Paredes deplored trends toward declining college readiness and enrollment shown by several measures for in-state graduates. Noting the rising Latino majority in the state’s school-age population, Paredes said the future of Texas depends on how well we educate Latino children.

Justice Brister as chair read aloud a letter from Gov. Abbott​ calling for the commission to propose outcome-based funding for public education, modernization of instruction with technological tools, and reducing property taxes that pay for schools. Sen. Bettencourt stressed the central importance to him of capping property-tax rate hikes.

Rep. Huberty responded in part by noting that the state’s share of school funding has shrunk from around 49 percent in 2006 to less than 38 percent today, putting upward pressure on local property taxes to make up for the state’s reduced effort. Some 400 school districts have come up against the ceiling imposed by state law on their local tax rates, Huberty noted. You “can’t have property-tax reform without school-finance reform,” he said.

Rep. Bernal called for a focus on improving the “level of opportunity” afforded to all students and said the school-finance system’s inequities are perpetuating a pattern of unequal opportunity. His point was borne out by two graphs in Commissioner Morath’s data presentation.​ 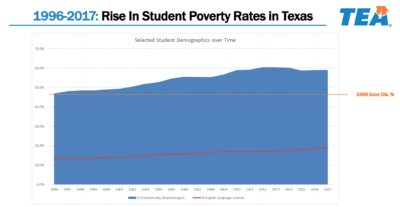 One slide showed that the percentage of economically disadvantaged students in Texas public schools has risen from under 50 percent to nearly 60 percent over the past 20 years.
Another slide showed the direct correlation between student scores on state achievement tests and student poverty.  Schools with the fewest students living in poverty typically had the highest scores; the higher a school’s percentage of students from low-income families, the lower the test scores. (High concentrations of low-income students also clearly correlate strongly with low local property wealth, making the state contribution to school funding even more essential to educational opportunity in these high-poverty areas.)
The next three meetings of the commission, all at the Texas Education Agency in Austin and all livestreamed via the TEA website​, will take place on February 8, February 22, and March 7. The commission may break out into working groups on particular issues at one of the next two meetings.