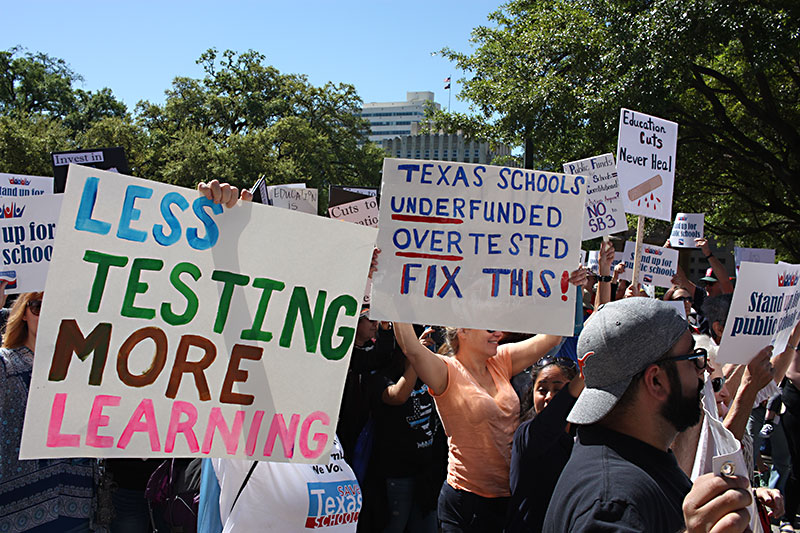 We often note that the Texas Legislature is the key entity that crafts policy for public education and funds it, so it has a tremendous impact on our schools. Not recognized as much is the power wielded by the commissioner of education–Mike Morath.

Morath, at the helm of the Texas Education Agency, is empowered to make “rules” for laws to clarify them and expand on them for how they will work. That power was on display recently when the commissioner released rules further defining and in some instances changing the meaning of the A-F ratings for our accountability system.

While Texas AFT has long opposed the A-F rating system as unfair and ineffective at gauging student achievement for districts and campuses, we also oppose parts of these new rules that could triple the number of campuses in Texas facing harsh sanctions—such as school closures or districts being taken over by TEA-appointed boards of managers—for unacceptable ratings. The objectionable change is one that turns a D rating for a campus into “unacceptable” instead of “needs improvement” if that rating follows a D from the previous year. With this one rule change, TEA is reassigning a large number of campuses to “unacceptable” and thus in the pathway for state takeover.

Note that the harshest of sanctions (school closure or district takeover by the state) are at the discretion of the commissioner of education for unacceptable campuses in many instances, but they become mandatory at the fifth year of unacceptable ratings.

With the threat of these sanctions, it’s clear that many districts will be much more likely to look at “partnerships” with charter-school networks or non-profits, a move that halts mandatory and discretionary sanctions under Senate Bill 1882 passed in 2017. That law also provides significantly more per-pupil funding to these campuses. The state has thus incentivized takeovers of neighborhood schools with this law.

Now the good news. A change in rules that we support is that a D following an F requires an “intervention pause,” meaning the school gets a pause in its chain of unacceptable ratings that determine sanctions and interventions. (However, a subsequent D starts the chain of “unacceptable” and interventions again.) It’s common sense that a school making improvement from F to D in a year should get this pause. This change could benefit some of the schools in Houston facing closure or a state takeover of that district (a move that we also object to).

You can find the proposed TEA rules here, and our formal comments in reply here. Final rules likely would be implemented in September, but Texas AFT is urging the commissioner to delay implementation, because the process did not involve meaningful stakeholder input.