Texas Speak Out! and Stand Together Rally! unites educators in wake of Santa Fe shootings

Hundreds of educators from across the state gathered at Discovery Green in downtown Houston Saturday afternoon for a rally intended to unite them on a path to voting for supporters of public education in November. (You can view the Facebook Live video of the rally here.) But equally important Saturday were the pleas from speakers who demanded action on making our schools safer in the wake of the shootings at Santa Fe High that killed 10 people.

​
Texas AFT President Louis Malfaro and AFT President Randi Weingarten forcefully spoke on the need to address gun violence in schools. Malfaro called on Gov. Greg Abbott to create a commission–with seats to be held by educators–to make specific recommendations to help put an end to school shootings. Abbott did announce today a series of “roundtable discussions” on the shootings, but hasn’t given any indication that he’s willing to promote any legislation tightening restrictions on gun permits, purchases or types of weapons, nor has he responded to calls from some lawmakers for a special session on the issue.

Weingarten said there is a similarity between the states that had teacher walkouts and what is happening in Texas. “What was the same was that in each of these state houses, legislators and sometimes governors, thought that the NRA and billionaires and gazillionaires were more important than the students of their constituents,” she said. “We have to decide what matters more—kids or the NRA.”

Weingarten also blasted Lt. Gov Dan Patrick. “How dare lieutenant governor Patrick say that they should ban doors in school instead of guns,” she said. “This shows how out of touch he is with what kids really need.”

Patrick also has been a strong proponent of arming teachers, something President Donald Trump has called for as well. However, national polls show that teachers are overwhelmingly against the idea. National polls show strong support for stricter gun legislation, although that support is lower in Texas. Still, an October poll of Texans showed that more than half favored stricter gun control, while 31 percent felt it should stay the same and 13 percent said there should be less.

AFT has a resolution on recommended changes in gun laws, which was passed in February. 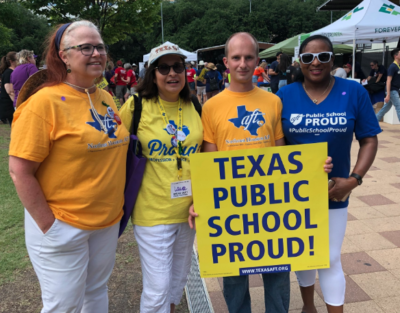 funding for school employee and retiree health care. You can view an entire list of speakers here.  Many of the attendees of the rally–sponsored by Texas AFT, Mike Collier for Lt. Gov.​, and Texans for Public Education-​-wore purple to symbolize the need not be fixed on Republicans or Democrats (red and blue) in the election, but instead to vote for candidates who had been vetted as true friends of public education.

Missed the rally? You can show your support for specific demands of the state leadership and Legislature here.​