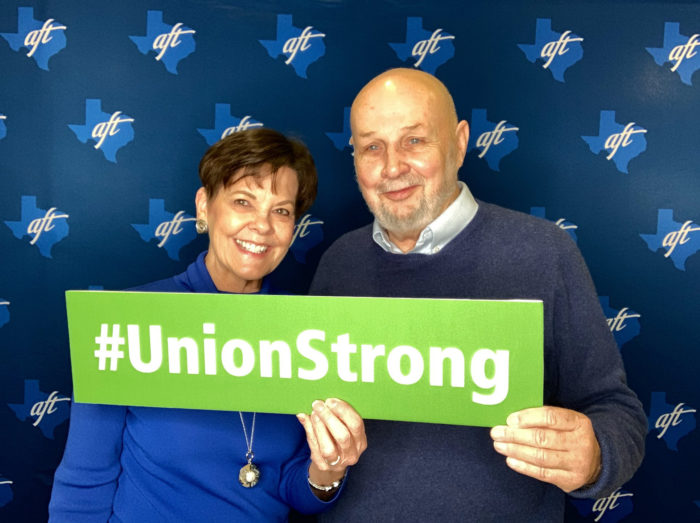 Goodbyes to our union leaders are always tough, but we have a feeling that this will be more of a “see you around” farewell to Shelley Potter, who is leaving her post as the president of the San Antonio Alliance of Teachers and Support Personnel after more than 35 years in union leadership. Elected to replace her is Alejandra Lopez, and we send her a warm welcome.

If there’s one thing Shelley learned early on, it’s the importance of keeping cool. After years of teaching at a San Antonio elementary school, she cut her teeth on union advocacy by spearheading a drive to air-condition a large number of campuses still without cooling, which left the students and staff weary and inattentive battling the sweltering heat. Shelley herself had to keep cool and steer a straight and unwavering course for her members during union mergers, roller coaster relationships with superintendents and school boards, and a recent all-out invasion by charter-school chains. In short, she never gave up when facing a defeat, and she used the fire in her belly to bounce back and find new victories.

Her husband of more than three decades, Tom Cummins, is president of the Bexar County Federation of Teachers, and together they became a foundation of experienced leadership for Texas AFT and helped mentor numerous local presidents across the state. Shelley also had a unique position of leading a merged local, which means that the union is affiliated with both Texas AFT/AFT and TSTA/NEA. Although a balancing act, it also meant having a tremendous source of support and resources to draw from and she used them well.

Shelley was also known for equipping her staff and leaders to support the entire school team—the custodians, bus drivers, secretaries, food service workers, and more. If we ever needed an example of successful advocacy for those members, we always called San Antonio to check on its latest campaign.

To be completely accurate, Potter is leaving because of term limits established by the union years ago. Her mentioning this often is a clear signal that she’s not quitting anything. It’s sure she’ll take the fight for school employees and other workers to a new level in another endeavor. Shelley was always an active participant in the broader labor movement outside of public education.  There’s a big union family that will miss her dearly, at least in the role of Alliance president. Shelley, we’ll see you around for the next fight, and the next celebration.

We could go on forever on just how remarkable Shelley is and her numerous achievements, but best now to leave it to her remarks and some great profiles published recently.