PSRPs doing what they do best: community service

Right before getting together for their annual meeting of school and college support professionals, members of AFT PSRP got together to give back to the community that hosted them.

This year, paraprofessionals and school-related personnel teamed up with Smart from the Start, a program that supports school readiness, to host a community day on April 16 in the Woodland Terrace neighborhood of Southeast Washington, D.C.

There were hundreds of flowers and trees to be planted, tons of mulch to be slung, children’s books to be distributed and barbecue to be eaten.

“We PSRPs always try to give back to the community because we are the community,” Ruby Newbold, an AFT vice president and the PSRP chair, told the crowd.

AFT partner First Book helped a busload of PSRPs from across the nation unpack and distribute about a thousand new books and baby supplies to our union’s D.C. neighbors. PSRPs and AFT staff had donated enough baby supplies to fill 50 baskets for new parents, plus enough excess supplies for Smart from the Start to use in the year to come.

The volunteers also grabbed shovels and rakes to plant flowers, and several worked on the chow line during a picture-perfect spring day in the nation’s capital. Other volunteers included staff from the D.C. Housing Authority and the Woodland Terrace Resident Council.

Ron Friday, a community navigator with the D.C. Housing Authority, noted that April 16 is the anniversary of Emancipation Day in the District of Columbia—marking the abolition of slavery there in 1862. On that day, more than 3,000 enslaved people were freed eight months before the Emancipation Proclamation liberated slaves in the South. Like other city employees who helped with the event, Mr. Friday, as he is called, had volunteered his time on a holiday. 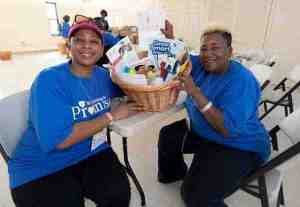 “It’s mind-blowing,” said Kat Chapman of Smart from the Start. “We’ve never had such support.”

Another contingent of PSRPs remained indoors to load up children’s backpacks headed for Lynn, Mass., which has seen an influx of unaccompanied minors from Central America. Volunteers received a “backgrounder” on the situation from representatives of the Latin American Youth Center and Ayuda, a nonprofit group that helps these children find access to services, deal with family separation and fend off gangs.