This afternoon, Sens. Alexander and Murray—the chair and the ranking member, respectively, of the Senate Health, Education, Labor and Pensions Committee—announced that they had broken the logjam in Washington and unveiled a bipartisan bill reauthorizing the Elementary and Secondary Education Act, also known as No Child Left Behind. (Here’s our statement on their agreement.)

This is a big deal!

The Alexander-Murray bill goes back to the original intent of the law, to level the playing field for at-risk kids. The decreased emphasis on testing and the stakes that go along with it will help create some breathing room, so the attention can be on instruction and the joy of learning. (Read a New York Times story about the bill.)

Today we received 600-plus pages of legislative language for this bill. On April 14, the Senate HELP will “mark up” the bill, and then it will move to the Senate floor, likely later this spring.

As you may recall, the House of Representatives tried to move a bill in that chamber earlier this year, but it did not have enough votes to pass its version of a bill.

Most important, the Alexander-Murray bill fundamentally changes the federal education landscape. While ensuring that resources are directed where they are most needed (by maintaining the formula that concentrates funding for poor children, by not including portability or block grants, and by keeping maintenance-of-effort requirements), it maintains the original purpose of ESEA. 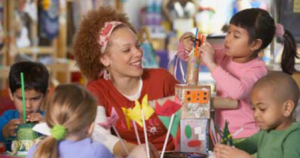 The bill sharply curtails the federal sanctions and punitive aspects that characterized NCLB, Race to the Top and the waivers, by eliminating the most punitive and unworkable aspects of the law. While it maintains current law’s annual testing requirements—a non-negotiable for the national civil rights groups and the White House–the new system under this bill is more flexible than the one we have now. For example, under this bill, we will not have a rigid and unworkable “adequate yearly progress” accountability system, mandatory punitive sanctions, or teacher evaluation that is mandated or prescribed by the federal government. And the collective bargaining construction clause is preserved.

When the AFT started our 2015 ESEA reauthorization process, we had three priorities, and the Alexander-Murray bill largely achieves these priorities:

Our work is not done

Moving forward, we will continue to push for amendments and changes that improve the system for our members and the students they serve in every step of the process. This includes pursuing amendments that improve the assessment and accountability process, provide funds for priorities such as early childhood education and community schools and give parents available information on testing requirements, including the right to opt-out.

And we will continue to work with civil rights, parent, education, student and community groups. For example, the Alliance to Reclaim our Schools (AROS) will send a letter to the Senate about charter school accountability and promoting community schools as a way of helping struggling schools. The letter has more than 100 community groups signed on.

I want to thank our leaders and members for the thousands of letters, tweets and emails you have sent, and the countless meetings you’ve had with your members of Congress on ESEA. Thanks to our work together, we have made some real progress, and the concerns of our members have been heard. While we still have important work to do together, we are closer than we have been in more than a decade.

What others are saying

“The original ESEA helped us reclaim the promise—of public education once, and because of the voices of AFT members and the hard work of Sens. Murray and Alexander, it can again.”
—AFT Secretary-Treasurer Lorretta Johnson

“One may quibble with details, but the bottom line is that this bill defangs the U.S. Department of Education; it no longer will exert control over every school with mandates. This bill strips the status quo of federal power to ruin schools and the lives of children and educators.”
—Diane Ravitch

“This agreement is a strong step toward helping students, educators and schools.”
—Sen. Patty Murray

“Chairman Alexander and Sen. Murray have created an excellent bipartisan bill that gives the Senate a strong starting point for the long overdue reauthorization of the Elementary and Secondary Education Act.”
—Council of Chief State School Officers (CCSSO)