The TRS board deadlocked Friday on how much to reduce the projected rate of return assumed for TRS investments. The assume rate of return on investments helps define how much contributions would have to increase to cover future obligations and make future benefit improvements possible.
Four board members agreed with Texas AFT that a consultant’s proposal to lower the assumed return to 7.25 percent from 8 percent would be too big a leap; these four proposed a less-drastic change to 7.5 percent. With one board member absent, neither option could muster more than four votes. The issue will be revisited at the July board meeting.

Whatever the eventual decision on rate of return may be, there is no question about the need for higher state pension contributions. The state held its contribution down to the constitutional minimum for many years, while employees paid more. Texas has the lowest state contribution rate by far of any non-Social Security state.

Currently state contributions are set at 6.8 percent of payroll, while employees pay 7.7 percent and school districts pay an effective average rate of 1 percent. At an assumed rate of return of 7.5 percent, trustees said Friday, projected unfunded obligations would increase by $7.3 billion, and contributions would have to rise by 1.38 percent before pension benefit improvements could be considered.

Even more urgently needed are higher state contributions for the separate health-care plans administered by TRS for active and retired school employees. Faced with stagnant state contributions for TRS-ActiveCare that have not budged since 2002 despite soaring health-care costs, the TRS board has been forced to raise premiums and curtail benefits repeatedly. At this week’s board meeting, it happened again, as TRS trustees raised the costs to be borne by employees (or their districts, if willing) by as much as 9.5 percent for the top ActiveCare plan, while reducing benefits. Other ActiveCare options also saw cost increases and benefit shrinkage. 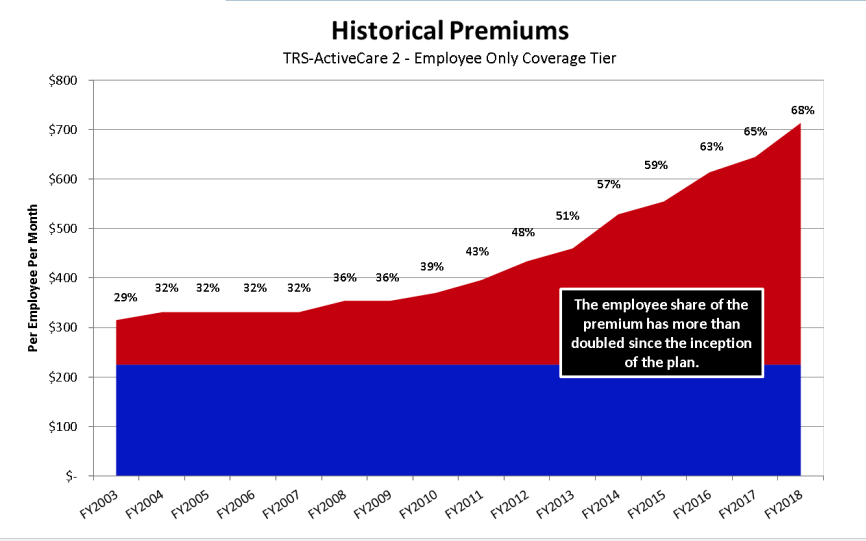 Trustees also heard from the TRS staff that the TRS-Care plan for retirees will require an infusion of $400 to $600 million for the 2020-2021 biennium when the Legislature meets next year–just to maintain the plan with the reduced benefits and increased costs imposed on retirees in 2017.

An upcoming Hotline will provide fuller coverage of the changes in health plans adopted this week.