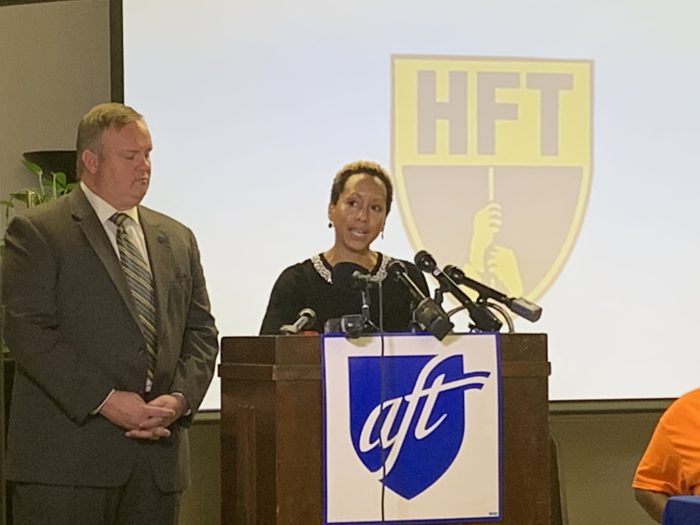 HOUSTON—The Houston Federation of Teachers filed a federal lawsuit in Austin today, stating the proposed state takeover of the Houston Independent School District is unconstitutional under U.S. and Texas law because it disenfranchises and discriminates against people based on race and national origin.

Gov. Greg Abbott and Education Commissioner Mike Morath claim the state takeover of the entire Houston school district, which earned an 88 (out of 100) academic accountability rating, was triggered due to one chronically failing school, Wheatley High School, which is attended by predominantly black and brown students. The takeover decision was made just days after voters elected new school board members in Houston, who would not be able to take their seats under the takeover, effectively silencing the democratic electoral process.

“The state’s action to take over the HISD is flagrantly unconstitutional and has nothing to do with giving kids a strong public education,” said Zeph Capo, president of HFT and Texas AFT. “Gov. Abbott and Education Commissioner Mike Morath will do just about anything to give private charter operators a chance to get their hands on our schools—even violate the state and U.S. constitutions. We can’t allow our government officials to unconstitutionally marginalize black and brown children, deny them their right to a quality public education, or defy the voice of voters who have just elected new school board members,” he said.

The suit was filed in U.S. District Court for the Western District of Texas in Austin.

The suit, which seeks injunctive relief, alleges that the proposed takeover violates the 14th and 15th amendments of the U.S. Constitution because it disenfranchises minority voters and discriminates against the plaintiffs (three educators, one of whom is a parent of children in the district) on the basis of race and national origin and deprives people, no matter their race, color or ethnicity, of participating in the political process or electing representatives of their own choice. Further, the suit states the proposed takeover violates Texas’ Equal Rights Amendment, which states: “Equality under the law shall not be denied or abridged because of sex, race, color, creed or national origin.”

The educator plaintiffs explained why they are participating in the lawsuit:

Jackie Anderson, a special education teacher at Ortiz Middle School, said the takeover would erase citizens’ legitimate votes. “Growing up, my parents instilled the value of civic responsibility. I voted for the first time with my mother. I was taught the value of my vote. Voting is something that you have an obligation to do. Everyone’s vote should count. My choice should be respected. To say that it doesn’t matter is a violation of my right as a citizen,” Anderson said.

Maxie Hollingsworth, a math teacher at Red Elementary and parent of HISD students, said her experience growing up in Little Rock, Ark., cemented her strong feelings about the sanctity of voting rights. “I was raised with the idea of the importance of equitable education and every person’s right to vote. It offends me to my core that people of privilege and power truly don’t care about communities of color and poor people. This takeover is a very targeted and intentional process and amounts to illegal disenfranchisement. It would take away my vote and everyone else’s who voted in the school board election. I can’t look at myself in the mirror and say this is OK. It’s not OK,” Hollingsworth said.

She added that she believes a takeover would result in fewer resources available to students and a greater turnover of educators. “All the progress HISD has made will all be for naught,” Hollingsworth said.

Daniel Santos, a social studies teacher at Navarro Middle School, said he became a naturalized citizen in 2008, when he voted for the first time in his life. “Through voting, I am holding policymakers accountable and making sure that minorities are not disenfranchised. I view the takeover of our recently elected school board as unconstitutional. It’s a serious violation of my civil rights that prevents me as a citizen from holding our policymakers accountable,” Santos said.

Following a state takeover, Santos predicted, “We will see market-based reforms that have failed to improve student achievement in other cities. We cannot let that happen.”

The HFT believes the state’s clear goal is to convert Houston’s public schools to privately operated charter schools, which the previously elected Houston school board had refused to do. However, Capo noted, several Houston charter schools are doing worse than Wheatley but are still being allowed to continue operating and are not being singled out in the takeover. Morath is justifying the takeover using a rule he enacted in 2018 that allows the Texas Education Agency to downgrade a school’s rating if it did not pass three of four measures, even if it would have passed otherwise. Wheatley had a passing 63 grade, or a D, but was curved down to a 59, or an F.

“The real shame is that the focus is on a scheme to charterize the district, not to get Wheatley the resources it needs to improve student achievement. Experience shows that charters do not produce the improvements their supporters claim,” Capo said.