It appears as though teachers in Virginia will soon be allowed to collectively bargain with the public school systems. Democrats in the General Assembly of Virginia have recently proposed legislation that would reverse a long standing state law that forbids public employee unions from negotiating on salary and benefits. (Texas also currently has a prohibition for most public employees—including school employees—from collective bargaining.)

The measure passed the House of Delegates along party lines and is expected to pass the Senate as well. In addition to educators, police and firefighters would gain bargaining rights. This projected legislative victory come on the heels of Democrats’ big victory in Virginia this past November, when they won a majority in both houses of the General Assembly for the first time since 1994.

“Today is historic. Public employees across the commonwealth will finally have a voice at work, and the ability to come together and bargain collectively for the things that actually make a difference in their lives and the lives of the people they serve,” said AFT President Randi Weingarten in a statement earlier this month. 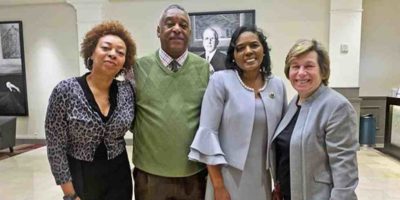 Collective bargaining is a means by which employees—represented by a labor organization—can directly negotiate a legally binding contract with the employer that governs their work for a specific period of time. The process gives employees a guaranteed voice writing a legal contract that clearly defines wages, benefits, working conditions, grievances procedures, protection from termination without just cause, and the rights and responsibilities of the union negotiating the contract.

While collective bargaining is still an option to pursue with the Texas Legislature in the future, Texas AFT advocates elected consultation as an effective means for helping employees work with districts now on employment and education issues. Under elected consultation employees elect an organization—often a local union—to represent them in negotiations for salary, benefits and a host of other issues like class-size limits and professional development. Virginia’s victory should encourage us to keep fighting for our rights in our unions and incentivize us in our work to elect more pro-union legislators this November.

Read more from AFT on the legislation.