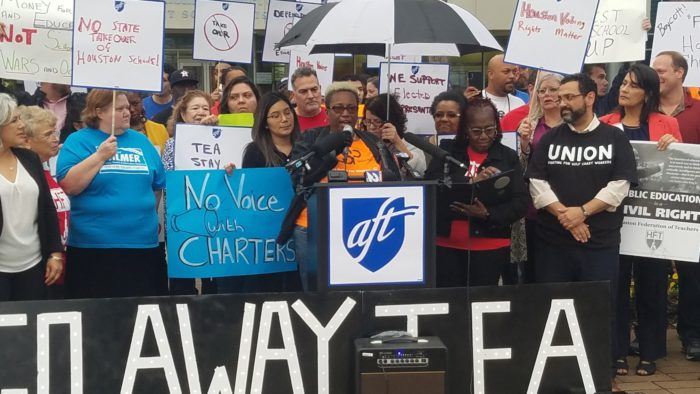 A court ruling Wednesday temporarily halted the state’s plans to take over Houston ISD and replace its School Board with a board of managers appointed by Education Commissioner Mike Morath.

Travis County District Judge Catherine Mauzy granted Houston ISD an injunction ordering that the Texas Education Agency could not proceed with the takeover until the district’s lawsuit against it is heard in court, with the next hearing scheduled in June. However, TEA likely will appeal the stay, so just how long the injunction will remain in place is uncertain.

“We’re thrilled that the judge sees the harm that would be caused to Houston schools and students if there were an immediate takeover of the Houston Independent School District,” said Zeph Capo, president of the Houston Federation of Teachers and Texas AFT. “The state wanted to make a very quick and consequential move—which we contend is unwarranted and illegal—that the judge rightly said would cause irreparable harm if made prematurely.”

AFT President Randi Weingarten also weighed in on the decision. “The judge made clear that the best interests of children and of the community that represents them are more important than Commissioner of Education Mike Morath’s power grab,” she said, adding that Houston public schools have shown real progress, and the Texas Education Agency can’t simply ignore that progress and use a ruse to take over HISD.

HFT members had planned a protest rally for the first School Board meeting of the year last night, but the ruling gave cause for some celebration as dozens of union members, parents, and students gathered outside with a banner proclaiming, “GO AWAY TEA.” Four new members of the School Board will be seated at the next meeting and will begin serving their terms.

A federal court on December 19 had dismissed Houston ISD’s attempt for an injunction and dismissed its lawsuit, which also stopped Texas AFT’s attempt to join the suit. However, the judge allowed the action to continue in state court. Texas AFT currently is weighing its options on pursuing further legal action against the state. You can read more about the state takeover attempt and legal action against it here.