An anti-teacher amendment was rejected decisively by a bipartisan majority in the Texas House late on Monday afternoon. Rep. Bill Zedler (R-Arlington) tried to insert the anti-teacher amendment into SB 16, a bill creating a commission to study long-term fixes for school finance and recommend a comprehensive overhaul before the next regular legislative session in January 2019.

Zedler’s amendment would have directed the commission to study putting an end to the freedom of school employees to have voluntary payroll deduction of their organizational dues. The amendment drew bipartisan resistance, featuring tough questioning of Rep. Zedler about the reasons for this “teacher discrimination” bill, as Rep. Byron Cook (R-Corsicana) described it.

Rep. Dan Huberty (R-Houston), chair of the House Public Education Committee, pressed Zedler to explain exactly how his payroll-deduction amendment had anything to do with school-finance funding formulas, but Zedler couldn’t do it. When the time came to vote, it wasn’t close. Zedler could muster only 49 votes, according to the unofficial tally, versus 78 votes against his anti-teacher amendment. Some 33 Republicans and 45 Democrats voted against the anti-teacher amendment, and among the 21 representatives absent for the vote were another 12 or 13 likely to have voted against this bad idea. (We understand also that at least one representative after the vote informed the House clerk that he had been shown voting for the amendment when he had intended to vote against.) 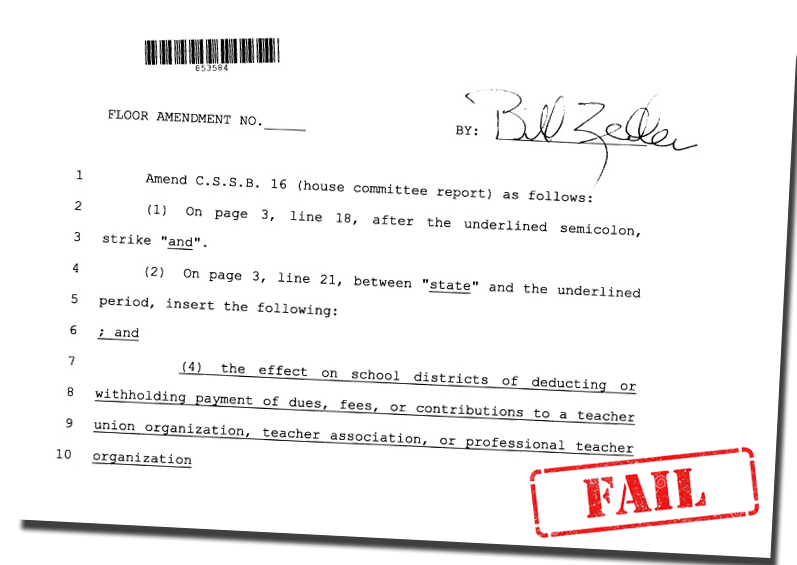 While that drama was unfolding in the House, the Texas Senate was “standing in recess” as House and Senate negotiators on school finance were at work behind the scenes. The Senate still has to pass the key school-finance bill, HB 23, this evening in order to get a deal all the way through the legislative process by Wednesday, when the special session must end. Nothing definite is known as of 7 p.m. about where the House-Senate talks stand, but the word filtering out of the back rooms is that funding sought by the House but deleted in Senate committee for bilingual education and for students with disabilities will be restored to the bill.

It’s possible that funding for TRS-Care cost relief for retired school employees will be folded into an eventual deal on HB 21, but for now the money for that purpose is in SB 19, which is scheduled to be taken up on the House floor Tuesday afternoon. Both the House and the Senate have voted to provide $212 million to reduce the increases in TRS-Care deductibles and premiums that otherwise will take effect in January 2018. The only big difference between the two chambers concerns how to pay for the health-care cost relief.

You can still send your letters urging lawmakers to provide both a school-funding increase and health-care cost reductions for TRS retirees via the Texas AFT legislative-action website. Help lawmakers get these bills across the finish line in good shape by Wednesday!