Stop the Swap: send federal aid to our schools 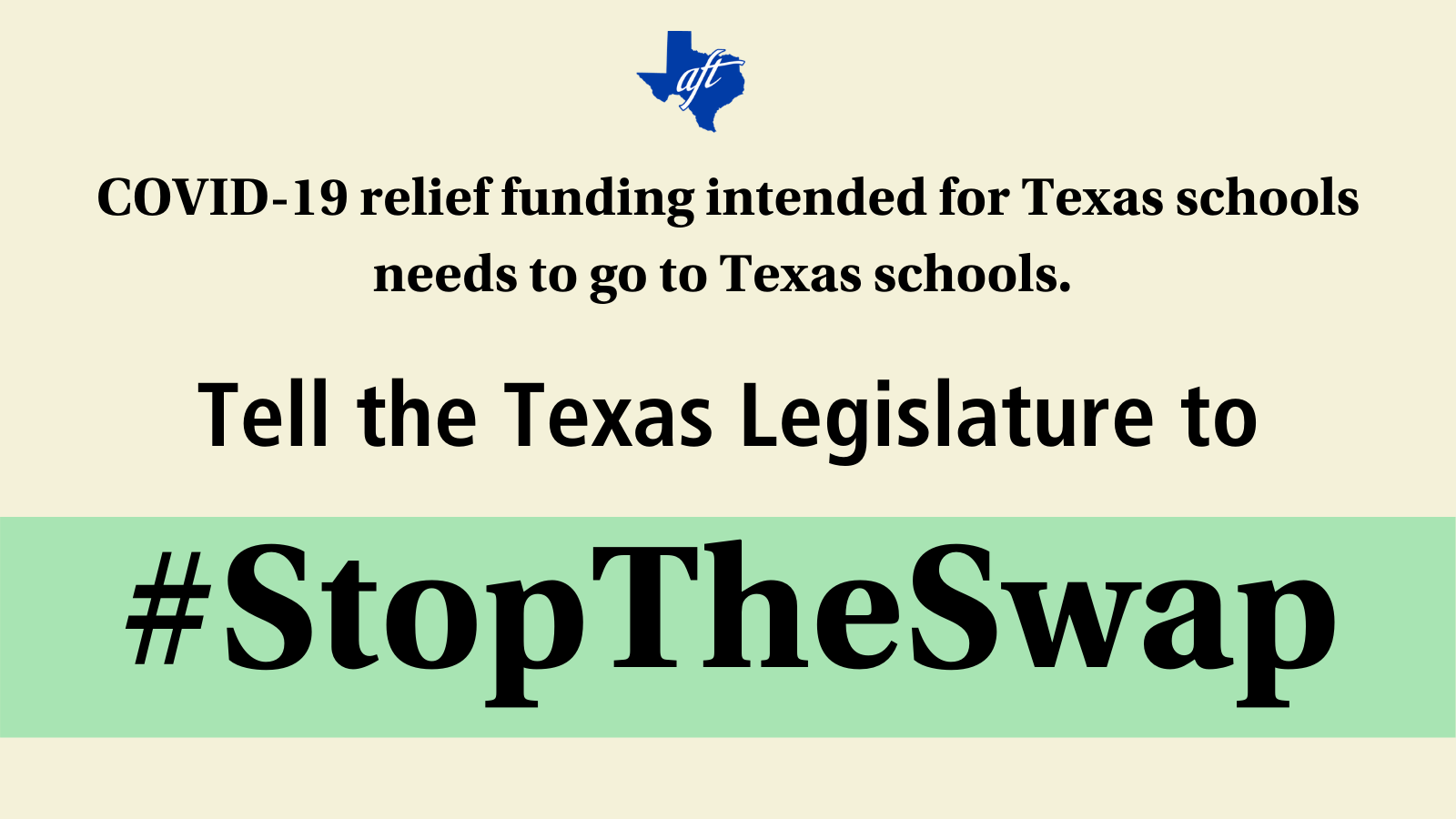 A year of pandemic has been hard on students, employees, and district budgets.

That’s why we need to ensure the Texas Legislature acts to send $17.9 billion in federal relief funding to our schools that’s waiting to be disbursed.

Last spring, Texas received an initial round of federal relief money that included $1.3 billion for schools. But our schools never got it. Instead, state leaders substituted that federal funding for state education funding and used the excess to plug other budget gaps. We can’t let that happen again.

You can also tune in to our Facebook page on Tuesday at 6 p.m. for a special live message from Texas AFT President Zeph Capo on how stopping the swap will help our schools.

Senate offers first look at its state budget proposal
A budget proposal unanimously passed out of the Senate Finance Committee this past Tuesday would continue, in general, investments in public education funding made in the 2019 school-finance law, HB 3.

The budget could reach the floor for full Senate approval Tuesday, and then legislators will try to reconcile it with an eventual House budget proposal. The first full look at a more detailed Senate budget is overshadowed by decisions on how $17.9 billion in federal stimulus funding for Texas public education will be used. (See “Stop the Swap” above.)

Bill that would pave the way for state takeovers of school districts faces harsh critique
Rep. Alma Allen (D-Houston), a former Houston ISD administrator who serves on the House Public Education Committee, had a pointed line of questioning this past Tuesday on the committee’s hearing of a bill that would remove legal roadblocks for a state takeover of Houston ISD. “This bill simply gives the state the right to take over education in the state of Texas,” Allen said. “I don’t think that’s the solution.”

Last year, Education Commissioner Mike Morath announced he would remove the elected Houston ISD school board and replace it with a Texas Education Agency board of managers. He claimed authority for the move because the district did not meet state accountability ratings for one school out of some 280 campuses—and even that campus’ rating was in dispute. Houston ISD filed a lawsuit to stop the takeover and won an injunction stopping the action on the grounds that Morath had not followed the law and exceeded his authority. Two state attempts to overturn the injunction failed, and the lawsuit continues.

HB 3270 would change state law to give the education commissioner the authority and procedural steps needed to bypass a legal challenge like Houston ISD’s. It would grant enormous power to the commissioner, thus creating a danger of statewide takeovers of democratically elected school boards for school accountability ratings and for questions over local school district operations. “This bill would make Education Commissioner Mike Morath investigator, judge, and jury, not subject to outside review,” said Zeph Capo, Texas AFT president.

Allen said we need to concentrate on giving schools the resources they need and also respect the teaching profession with higher pay. “We need to elevate the teaching profession,” she said. “Treat teachers as if they are professionals. And the state of Texas does not do that. That is my proposal.” The bill was left pending in committee, and Texas AFT will continue to oppose this assault on democratically elected school boards.

Already bad rating system would get drastically worse with D-and-F bill
Texas AFT has long opposed the A-F school rating system, and the punitive sanctions that come with it; we view the system as an unfair and ineffective way to look at the actual performance of a campus and district. Nevertheless, HB 3731 would make it worse redefining an “unacceptable rating” to include D-rated schools, as opposed to just F-rated under current law. Texas AFT opposes this bill because it would give a political appointee (the commissioner of education), who also defines these labels, even more power to take over democratically-elected school boards.

Although Dutton made minor changes to the bill that would not penalize campuses after receiving the first D, the bill would still significantly increase the number of school districts that would be vulnerable to state takeover in the future. 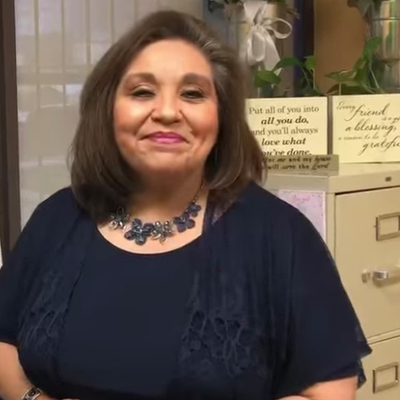 Northside AFT President Wanda Longoria testified this past Tuesday in favor of a bill—HB 256 (Philip Cortez, D-San Antonio)— that would require districts to include a policy for “anti-bullying measures to address bullying in the workplace, including provisions to address the bullying of a teacher by a parent.”

Longoria, who as a teacher faced bullying and legal threats from parents, told House Public Education Committee members that she suffered significant stress and health issues from the incident, which had a noticeable impact on her teaching.

“I know what being the best teacher I can be for students means,” she said. “It means a teacher is happy, focused, free of fear or intimidation, confident in the delivery of instruction, knowing there will be support there should it be needed. Teachers show up and support their students every day providing a safe learning environment. They need to know there are laws that will secure a safe teaching environment.”

Texas AFT has been successful at getting local school boards to pass anti-workplace-bullying policies, but this bill would require a statewide adoption, ensuring that all districts have these policies in place. HB 256 was left pending in committee.

Messy virtual education proposals need further study in proposed commission
This past Tuesday, the House Public Education Commission heard HB 1468 (Keith Bell, R-Forney) which addresses numerous provisions of law on the funding and operation of virtual instruction. Texas AFT has concerns about this bill because it provides too many opportunities for the expansion of shoddy virtual schools and does not ensure protections for teachers doing virtual instruction. The bill was left pending, with possible changes forthcoming.

AFT supports HB 3643 (Ken King, R-Canadian), which would create the Texas Commission on Virtual Education. The commission would develop recommendations on the funding and delivery of virtual education. While the pandemic has shown the need to address virtual education issues, a commission would be better suited to evaluating what is effective, rather than legislating changes in the current session. The bill, which we support, was left pending.

Legislative Briefs from the week of March 29:

Next Week In the House
The House Public Education Committee will be busy next Tuesday hearing dozens of bills on topics that Texas AFT has been monitoring closely, including these Texas AFT-supported bills:

Next Week In the Senate
The Senate Education Committee will be hearing bills Thursday, including these Texas AFT-supported bills:

Good bill of the week:

by Rep. Diego Bernal, D-San Antonio, which acknowledges the challenges of assessing high school students during the pandemic. The bill allows an Individual Graduation Committee to determine that a student is qualified to graduate without considering performance on any end-of-course STAAR exams for this school year, as well as 2021-22 and 2022-23. The bill passed the House Public Education Committee. 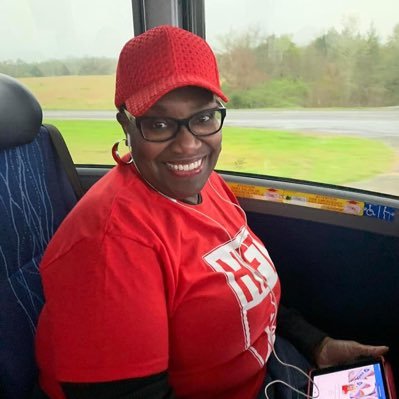 Houston Federation of Teachers members united with other Houston ISD teachers, nurses, parents, and community activists to defeat a District of Innovation proposal that would have allowed the district to hire non-certified, unlicensed teachers. The District Advisory Council voted down the proposal 21 to 10.

District of Innovation (DOI) status allows districts to go through a process to exempt themselves from certain provisions of the Education Code, and those exempted provisions need to be outlined in their plans. More than 800 districts statewide have achieved DOI with most opting only to exempt themselves from the required school-start date. However, many also have nixed requirements for notifying parents when K-4 class sizes exceed standards, as well as other important safeguards for educators and students.

“Almost all teachers and staff agree we need to be innovative in our work,” said HFT President Jackie Anderson. “But there are many ways to do this without lifting legal protections that ensure we protect students and educators. We know that teachers come into the profession in many ways, but state law already allows other alternative paths for career professionals to come into the classroom. Allowing HISD to entirely exempt itself from state law is not innovative.”

The victory also illustrates the importance of district advisory councils, which must approve DOI plans. Electing educator-friendly members to these councils—which consist of teachers and classroom professionals elected by district employees, as well as community members appointed by the school board—can be invaluable in fighting harmful DOI proposals. 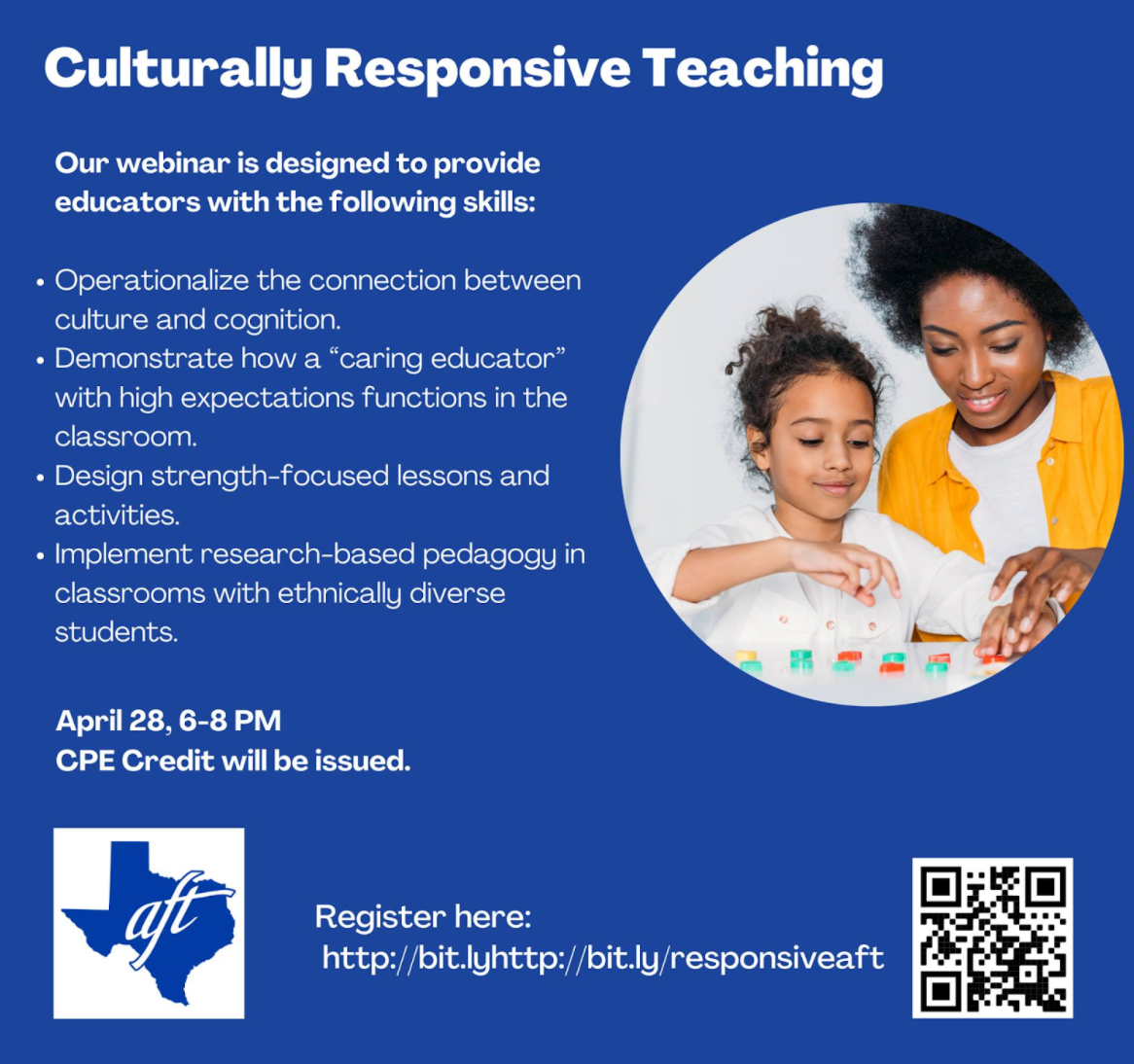 Culturally Responsive Teaching
The Bridges Institute for Professional Development is hosting a webinar on Wednesday, April 28 from 6 p.m. to 8 p.m. to provide educators with the following skills:

Social Secrets: What Parents and Educators Should Know
Online conflict via social media is impacting the way young people communicate and relate to one another. Additionally, many are unaware of the dangers they face as a result of their digital exploration. “Social Secrets,” a free webinar on Apr 14 from 6 p.m. to 8 p.m., gives an overview of how tweens and teens are using social media and how parents/educators can help them avoid social media pitfalls and ultimately: be safe, be smart, and be kind online. Register for free here.