Texas is at the top of the list of states with the largest cut in K-12 and higher education funding since the 2008 recession, according to a groundbreaking report by the American Federation of Teachers.

Governments in 25 states have shortchanged public K-12 education by $19 billion over the last decade, the report found. “A Decade of Neglect: Public Education Funding in the Aftermath of the Great Recession”​ details for the first time the devastating impact on schools, classrooms and students when states choose to pursue an austerity agenda in the false belief that tax cuts will pay for themselves.

Over the past decade, Texas cut its public education spending by $2.5 billion—the second-worst showing after Florida.

For higher education spending, Texas tops the nation with its reduction in postsecondary investments by $1.78 billion.

“Texas should be ashamed of its disinvestment in education,” said Louis Malfaro, Texas AFT president. “There is no one to blame but state officials, including the governor and lieutenant governor, who would rather hand out tax cuts than give our kids a well-funded education. The fact is, money matters in schools,” .

The report found chronic underfunding explains the most recent data showing that average teacher pay adjusted for inflation in Texas is lower in 2018 than it was in 2009 and that the pupil-teacher ratio was worse in 2016 than in 2008. Texas is 43rd in the nation in per-pupil spending.

The report also found that this disinvestment is a choice. State officials have chosen to cut taxes and divert funds to pad the state’s growing reserve accounts rather than invest in children. Five of the 11 states with the lowest K-12 funding—Florida, Nevada, South Dakota, Tennessee and Texas—are also among those with the lowest taxes on the rich.

Texas, with 5.4 million children, is the fastest growing state in school-age population, adding about 850,000 new pupils in last 10 years. “This makes the underfunding of public and higher education a tragedy of epic proportions,” Malfaro said. 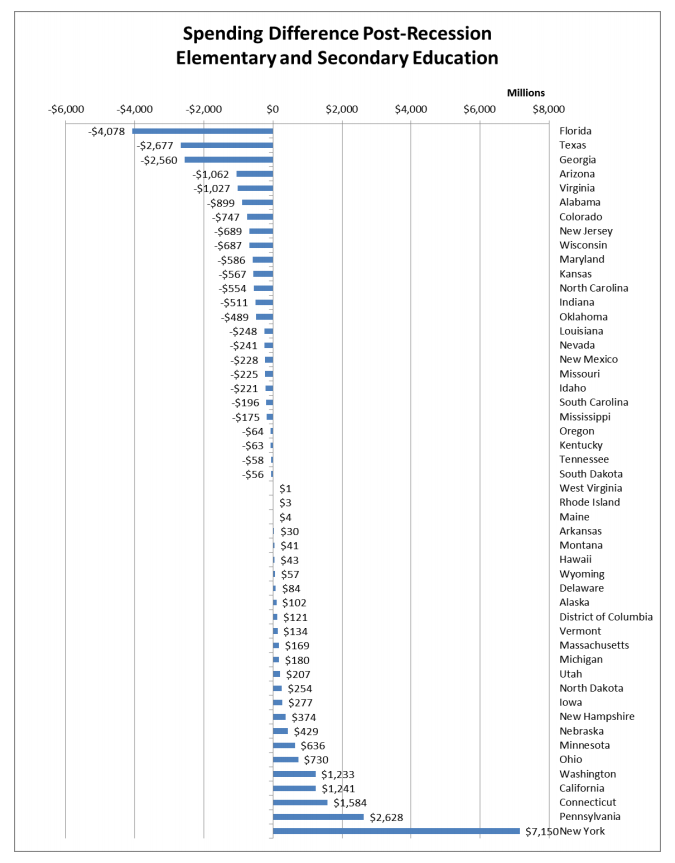