School Finance Commission meets, hears benefits of Pre-K and a plug for a cost of education study

The state’s School Finance Commission met Wednesday through today to continue hearing testimony on a variety of topics, including myriad statistics and anecdotes on the benefits of early childhood education.

HD Chambers, Alief ISD superintendent, bolstered those statistics by outlining how beneficial Pre-K is in his district for getting students kindergarten ready (and reading ready by third grade), which leads to continued achievement in later grades. Though he lamented that only half the eligible students in his district are enrolled in Pre-K. 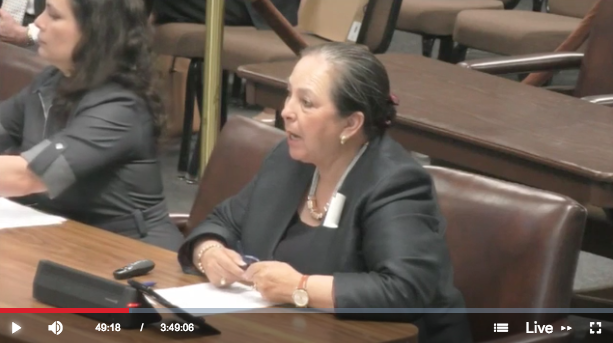 Dr. Esperanza Zendejas, Brownsville ISD superintendent, testifies on her efforts to expand Pre-K in the district.

Chambers also made the case for a state cost of education study. “We have never strategically looked at what it will cost to get third graders at reading level,” he said. “There has to be a serious conversation if we want to know the number. We have to be willing to admit there’s a number. We may not like it, but there is a number.”

While a cost of education study may be a scary prospect for legislators not willing to face the facts on the resources needed for the outcomes desired, the commission did get some more basic numbers on the cost of Pre-K education from TEA.

At a meeting of the full commission on Thursday, Pre-K again took center stage. Alexandra Hales of Good Reason Houston–a nonprofit seeking to improve quality of education in Houston–said evidence from Dallas ISD shows that Pre-K students experience less disciplinary problems later, have a lower rate of special education needs and are twice as likely to be kindergarten ready, which then leads to them being on grade level for third grade.

A handful of Commission members also participated in a Texas Tribune webcast this morning, where commission member Rep. Dan Huberty (R-Houston) noted that he got pushback for trying to shepherd Gov. Greg Abbott’s Pre-K funding requests through the Legislature. “There were some conservative groups who came after me and called it socialist and Godless,” he said. (Abbott’s initial “high-quality” Pre-K grants were funded in 2015, but didn’t make up for the cuts to Pre-K funding in previous sessions, and his request to double the funding for his program was rebuffed last session, with the Legislature instead forcing districts to use existing money.)

The Commission’s Expenditures Working Group also met today. We’ll have coverage of that meeting and more Commission news in upcoming Hotlines. For those who want to delve deeper in the topics under consideration–including measuring teacher quality and compensation, secondary education, assessments, and much more–you can visit the Commission’s website, which includes video archives of meetings and presentation documents from those giving testimony.