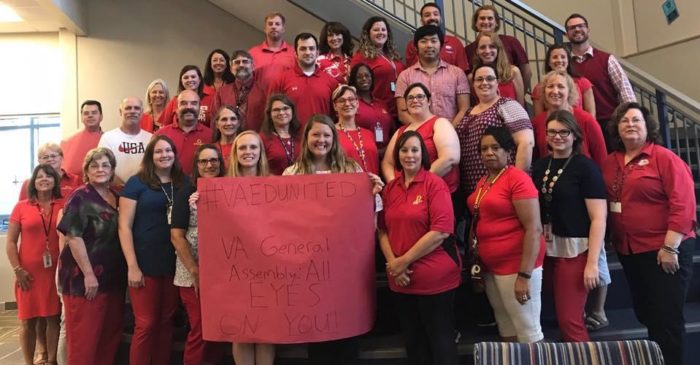 The movement continues! Red for Ed made another colorful display today in Virginia as thousands of educators statewide took the day off from school for a march in the capital of Richmond. The motivation for the march will look familiar–educators demanding higher pay and more school funding overall after decades of defunding schools and school employees in Virginia. Included in the march were AFT President Randi Weingarten, AFT and NEA members, and a grassroots coalition called Virginia Educators Unite. (AFT has the full story here.)

You’ll get your own chance to Speak Out and Stand Together in the Red for Ed movement on March 11, when you’re invited to join us at the state Capitol in Austin to make sure our lawmakers know we won’t take no for an answer to significant investments in educators and schools here in Texas. Expect a big rally and chance to also visit lawmakers for our March to the Capitol, and we’ll have a more detailed agenda as we get closer to the march. Make your plans to attend now, and RSVP on Facebook and our registration page. Note: You do not need to be a Texas AFT members to participate, and this year, the Texas State Teachers Association and other organizations that support public schools and increased education funding
are partnering with us for the event.

While Red for Ed continues to spread like wildfire across the country, there’s also great news in labor movement overall. A recent article in the Washington Post–with the great lead of, “Something funny happened on the way to the labor movement’s funeral”–does a great job of showing how what was thought to be the beginning of the end for unions after the Janus decision last year has proven to be just the opposite–a growth in both union membership and union activism.

When Justice Samuel A. Alito Jr. and his antilabor colleagues on the Supreme Court handed down the Janus v. AFSCME decision last June, unions braced for the worst. The American Federation of Teachers expected it might lose 30 percent of its revenue after the high court gave public-sector workers the right to be free riders, benefiting from union representation but paying nothing.

Instead, the 1.7 million-member union added 88,500 members since Janus— more than offsetting the 84,000 “agency-fee payers” it lost because of the Supreme Court ruling. And the union has had a burst of energy. There has been a surge of high-profile strikes by teachers’ unions in West Virginia, Oklahoma, Arizona, Los Angeles and elsewhere. Rallies, pickets and local campaigns mushroomed by the hundreds. The union has tallied 11 organizing wins since Janus, tripled its “member engagement” budget from 2014 and nearly doubled the number of voters it contacted in 2018.

“Alito put his thumb on the scales of justice for the anti-union ideologues,” says Randi Weingarten, president of the American Federation of Teachers. “It was a wake-up call to everyone. Everybody got engaged.”

Tags: March to the Capitol, Red for Ed