Mixed bag for Texas NAEP scores, but privatizers try as usual to use the Nation’s Report Card nationally as a call for privatization

The National Assessment of Educational Progress (NAEP) results were released on October 30, and as expected they were followed by a volley of exclamations about failing schools–all based on a false premise of what the scores reflect. The NAEP, known as the “Nation’s Report Card,” has long been misused by politicians and education “reform” pundits, while seasoned education officials take a more balanced stance on the results, viewing them as a somewhat useful tool to measure progress, but not something to go bonkers over either way if scores rise or fall by a point or two. 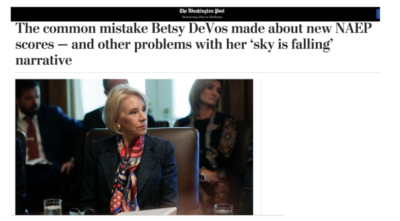 Speaking of “bonkers,” U.S. Education Secretary Betsy DeVos used the drop in national reading scores to proclaim: “Our Nation’s Report Card shows that two thirds of American students can’t read at grade level. Two out of three!” And then she barraged the media with the message that we need to privatize more schools and offer more “school choice.”

Fortunately, enough analysts and good reporters have witnessed the biannual release and the hysteria from some misanalyzing it to correctly point out that the NAEP scores do not measure grade-level reading, nor does the test even have a standard meaning for “proficiency.”