Poll: 91% of teachers voting in the Republican Primary want to ‘can’ Dan Patrick

Poll: 91% of teachers voting in the
Republican Primary want to ‘can’ Dan Patrick

A Texas AFT poll of 1,863 Texans (74 percent of them teachers or other school employees) shows they favor Republican Scott Milder by a huge margin over incumbent Dan Patrick in the 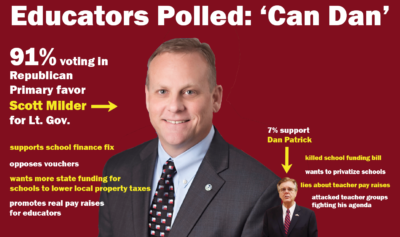 Some 91 percent of respondents who indicated they were voting in the Republican primary said they planned to vote for Scott Milder, with just 7 percent favoring Dan Patrick, and 2 percent indicating “neither.” When all Democratic voters (and those uncertain of which primary they would vote in) were asked who they preferred in the Republican race, the results were even more lopsided—98 percent for Milder and just 2 percent for Patrick.

“Patrick may have a big war chest, and he may have a solid base of supporters, but it’s clear that educators have a strong dislike for him and recognize that he has consistently sought to privatize public education and starve our schools of the funds they need to succeed,” said Louis Malfaro, Texas AFT president. “Educators see right through Patrick’s pretense of support for public education, including the sham proposals for teacher pay raises he floated at the Legislature last summer.”

Malfaro noted that teachers are particularly incensed that Patrick is running ads touting his supposed attempt to give teachers a $10,000 pay raise last summer–a claim labeled “Mostly False” in a PolitiFact newspaper column released this week. “First, Patrick never even proposed the $10,000 figure. Second, Patrick never proposed any new state funding to pay for any kind of raise. His only plan was to try to force school districts—already starved of needed funding—to find their own money for pay raises. Teachers recognized at the time that this was ludicrous, and they find it infuriating that Patrick is using that sham to promote himself for re-election.”

Malfaro added that Patrick also was directly responsible for killing a bipartisan school finance bill out of the Texas House that would have added significant funding to districts, held down increases in property taxes and provided more opportunities for districts to give teacher pay raises. Milder, who helped found Friends of Texas Public Schools, has made the foundation of his campaign true support of public education, including fixing the school finance system, so educators are solidly backing him.

“In comments made by the teachers we polled,” Malfaro said, “we counted about 50 instances of comments with ‘anyone but Dan,’ dozens noting that he wants to destroy public education, and quite a few that summed it up more succinctly with ‘can Dan.’ Not one person polled commented negatively on Scott Milder. On the contrary, those polled mentioned Milder’s strong support for public education, his opposition to vouchers, and his pledge to fix school finance.”

On the Democratic side, Mike Collier was favored 68 percent to 27 percent over Michael Cooper. Both candidates have pledged to support public education and oppose vouchers, with Collier specifically noting the need to fix shrinking state funding for education and the resulting rise in property taxes.

Texas AFT has endorsed Scott Milder in the Republican primary and Mike Collier in the Democratic primary. To see all Texas AFT endorsements in the primaries, visit: https://www.texasaft.org/campaigns/primary-election-2018/.

(Democratic Primary voters and those who were not sure which primary they would vote in) We know you selected that you were voting in the Democratic Primary–or Neither/Not Sure. But which one of these candidates would you prefer to win in their primary if you had to pick:
Scott Milder: 98%
Dan Patrick: 2%

Results for just teachers and other school employees

(Democratic Primary voters and those who were not sure which primary they would vote in) We know you selected that you were voting in the Democratic Primary–or Neither/Not Sure. But which one of these candidates would you prefer to win in their primary if you had to pick:
Scott Milder: 98%
Dan Patrick: 2%